Africa-Press – Botswana. Could the key to feeding the world with a changing climate be hiding in a 300-year-old museum collection?

That’s one of the hopes of scientists combing through 12,000 specimens of wheat and its relatives held in the Natural History Museum’s archives.

The most promising samples are having their genomes sequenced in a bid to identify the genetic secrets of hardier wheat varieties.

Climate change and pests and diseases are putting the crop under pressure.

The old varieties of wheat are stored in hundreds of old cardboard files, neatly lined up, row upon row, in the museum vaults. Each one contains dried leaves, stems or ears of grain, and sometimes all three, from centuries ago.

They’re carefully labelled, many in beautiful copper-plate handwriting, detailing exactly where and when they were found. It all provides useful information.

“The collection spans back to the 1700s, including a specimen that was collected on Captain Cook’s first voyage to Australia,” says Larissa Welton. She’s part of the team digitising the archive so it can be accessed online.

The James Cook sample is a wild wheat plant. It looks spindly and grass-like – quite different to the varieties growing in fields today. But it’s these differences that the team is interested in.

“We have specimens that are from before the introduction of various agricultural techniques, so they can tell us something about how wheat was growing wild or before things like artificial fertilisers.” 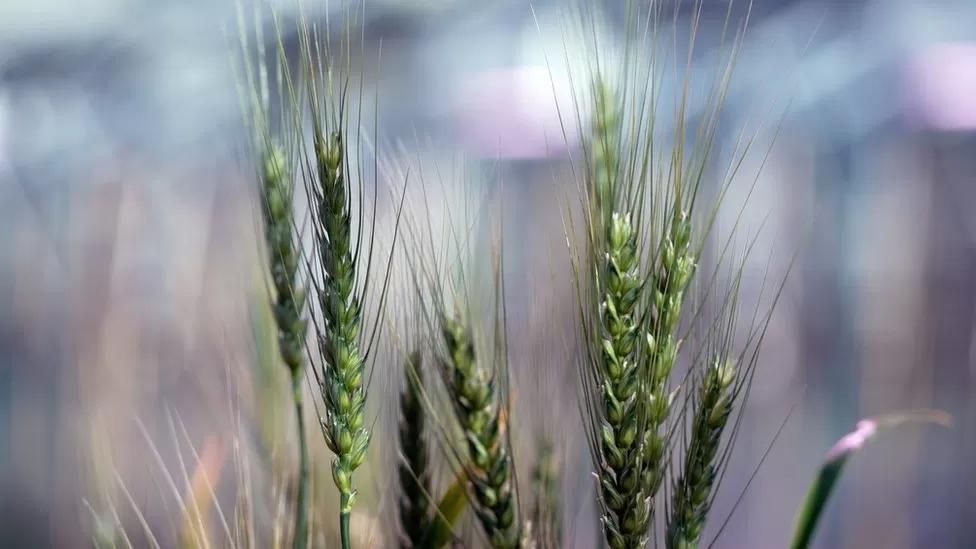 Why is wheat important?

Wheat is one of the most important crops in the world – it’s used for many foods, from bread and pasta, to breakfast cereal and cakes, and is an essential part of our diet.

The war in Ukraine, where a great deal of grain is grown, has put global supply under threat.

But it’s not the only problem: climate change, and the extreme weather it brings, is having an impact, with scientists calculating that a 1C rise in global temperature can cause a reduction of up to 6.4% in the amount we can grow around the world.

Pests and diseases are also causing major challenges, reducing the projected annual yield by about a fifth each year.

Modern wheat crops are struggling. The green revolution in the 1950s and 1960s led to farmers growing the varieties that produced the most grain. But this pursuit of producing the biggest harvests meant that other varieties were put aside – including crops able to cope with extremes – and the diversity of wheat was reduced.

“We want to be able to see whether there are some of the things that we have lost, that we could basically capture and bring back to the modern varieties,” explains Dr Matthew Clark, a geneticist at the Natural History Museum.

And this is important: the world will need more wheat as the population grows – an estimated 60% more by 2050. So scientists need to find wheat varieties that can grow in places where it currently can’t be grown – as well as crops that can withstand a changing environment.

“For example, by looking at crops that were able to survive in more marginal areas – places with hot and dry climates – that could help more developing countries increase their food supply,” says Dr Clark.

He explains that this could be done through traditional plant breeding, genetic modification or gene editing – a technique where genes can be very precisely added, removed or replaced. 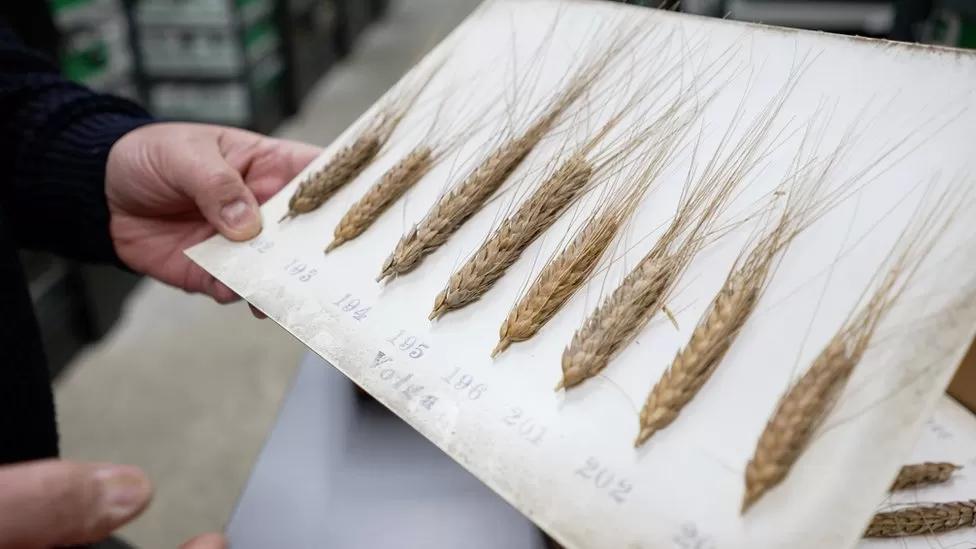 Scientists at the John Innes Centre in Norwich are also hunting through old wheat samples.

Their archive, called the Watkins landrace collection, dates back 100 years and contains varieties from all over the world. It’s stored at a chilly 4C, so the seeds are still viable, which means they can be planted and grown.

“What we want to do is look for new and useful genetic variation,” explains Dr Simon Griffiths as he looks through the collection.

The team at John Innes is taking some of the older varieties and cross-breeding them with modern ones – and they’ve had some success.

“There’s a very important disease of wheat, which is a global problem, called yellow rust, and that’s been increasingly difficult to control,” Dr Griffiths says.

“Within this collection of old wheats, there are new resistances to that disease, which stand up against this disease, and that’s being deployed by breeders right now to defend this really important threat to wheat production.”

“What about what’s in the wheat? We know that we can increase the fibre content, the mineral content of wheat,” he says.

“There’s so much diversity that hasn’t been fully exploited yet by modern wheat breeders, and we think we can bring that to them.”

The wheat we grow is going to have to change – scientists hope that looking back into our past and rediscovering lost varieties could be the best way to move forward.