Africa-Press – Botswana. The changing face of teenage life in Britain is being traced in a new exhibition of photos that capture everything from big nights out to sitting in your bedroom.

The exhibition, titled Grown Up in Britain: 100 Years of Teenage Kicks, includes pictures like Tristan O’Neill’s shot of clubbers at a jungle night at Bagley’s nightclub in London in 1996 (above).

“I love the crowd energy of everyone together and the excitement,” says Lisa der Weduwe from the Museum of Youth Culture. “It’s got all the style elements as well.”

The Museum of Youth Culture has chosen photos for the exhibition at the Herbert Art Gallery in Coventry, and der Weduwe says they show that while some things teenagers go through today are different from previous generations, many are not.

“I think the thing they tell us is that, while a lot has changed and society has changed, actually, teenage culture hasn’t changed that much.” 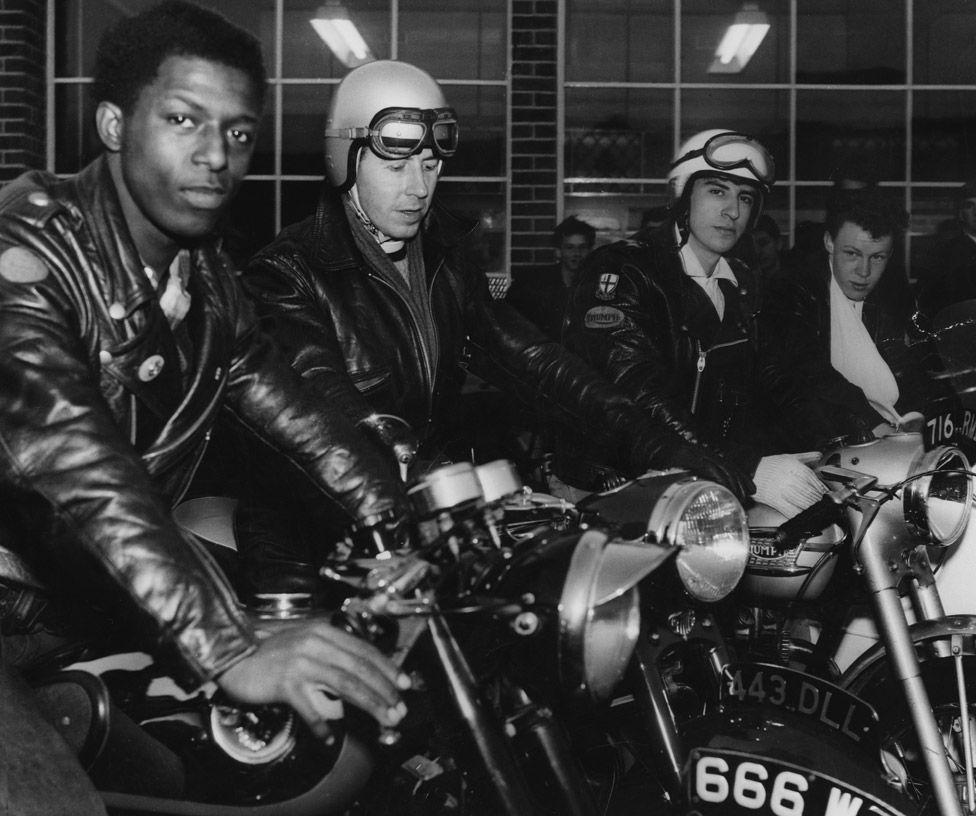 In 1961, the Daily Mirror published a “shock issue” about teenage motorbike-riding rockers from the Ace Cafe in north-west London.

A motorbike-loving priest, Father Bill Shergold (above, second left), visited the cafe and decided to set up a youth club for them, the 59 Club. “People were really shocked that there was this vicar going around with these teenage delinquents.

“They were the moral panic at the time, these teenagers on their motorcycles trying to hit 100mph. They were being ostracised from many youth spaces, they were banned from a lot of places to go. He felt actually, these young people needed his support the most.” 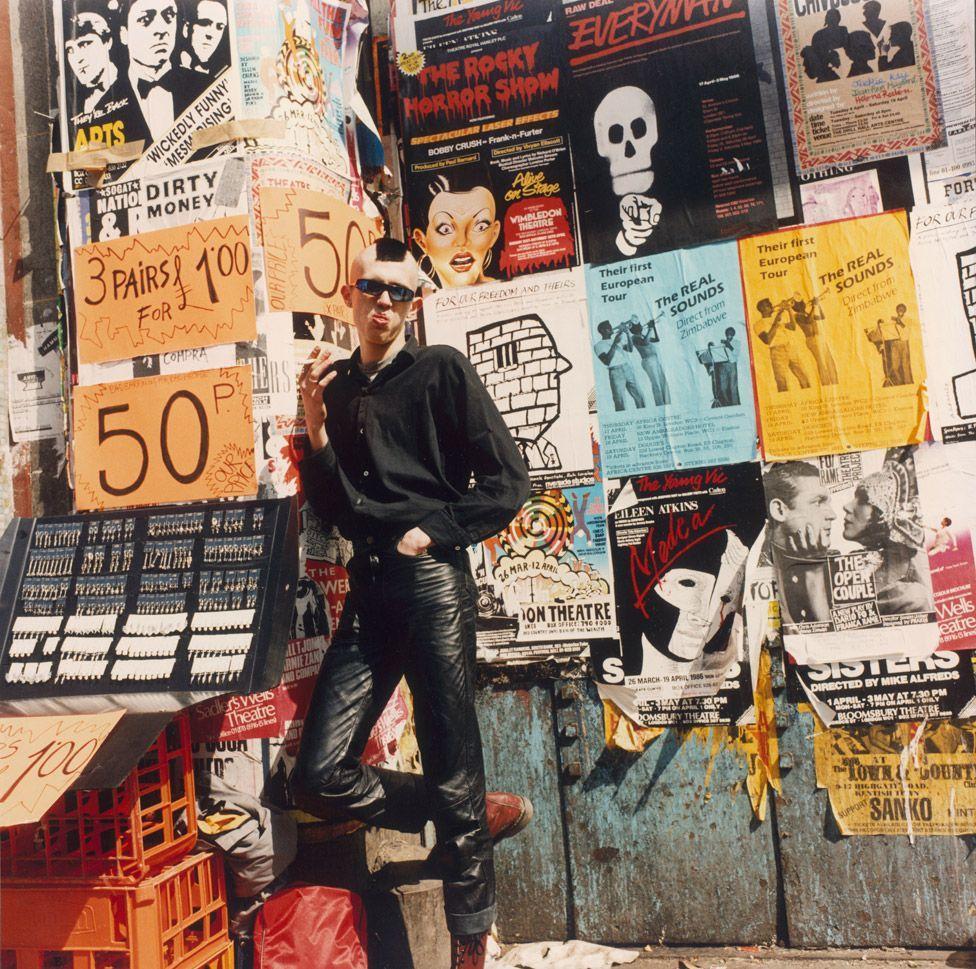 This photo by Shirley Baker shows a young man selling “Bad Earrings for Bad People” in Camden, north London, in 1986.

“These are really beautiful and evocative photographs of mostly teenagers and people in their early 20s from the punk scene, hanging out,” der Weduwe explains. “This one is a street seller.

“I just love all the little details – the old posters, three pairs for £1, and he’s got his really DIY set up with the crates. It does speak to the ingenuity of young people with their side hustles.” 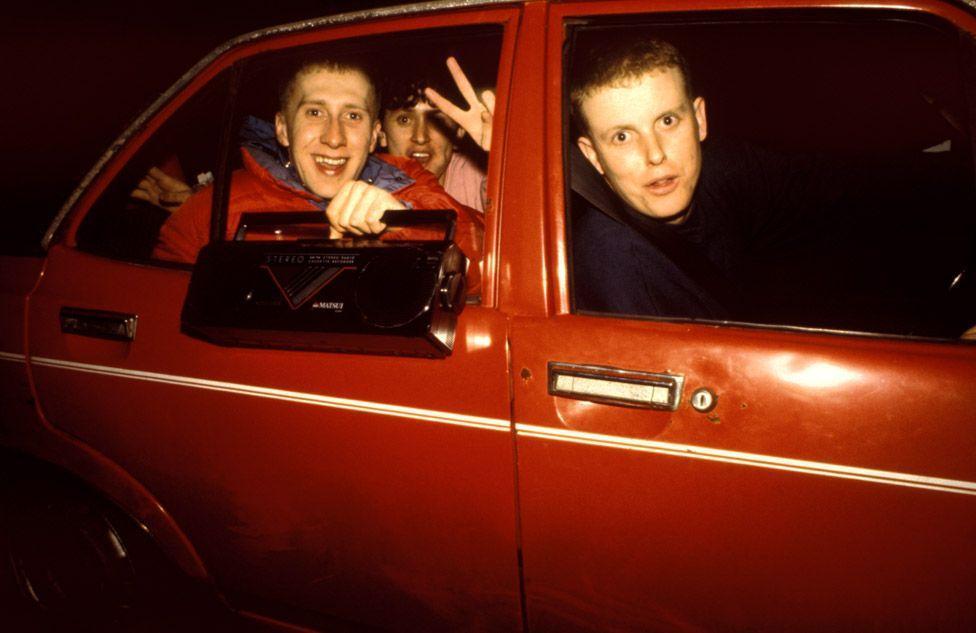 Tony Davis photographed the rave scene in the Midlands in the the early 1990s, including pictures of ravers at Sandbach service station in the early hours on their way back from Shelley’s nightclub in Stoke-on-Trent.

The Museum of Youth Culture was founded was in 2019 because no other archive collection focused on the experiences of young people, der Weduwe says. “It’s a heritage that’s at risk of being lost and at risk of being overlooked. 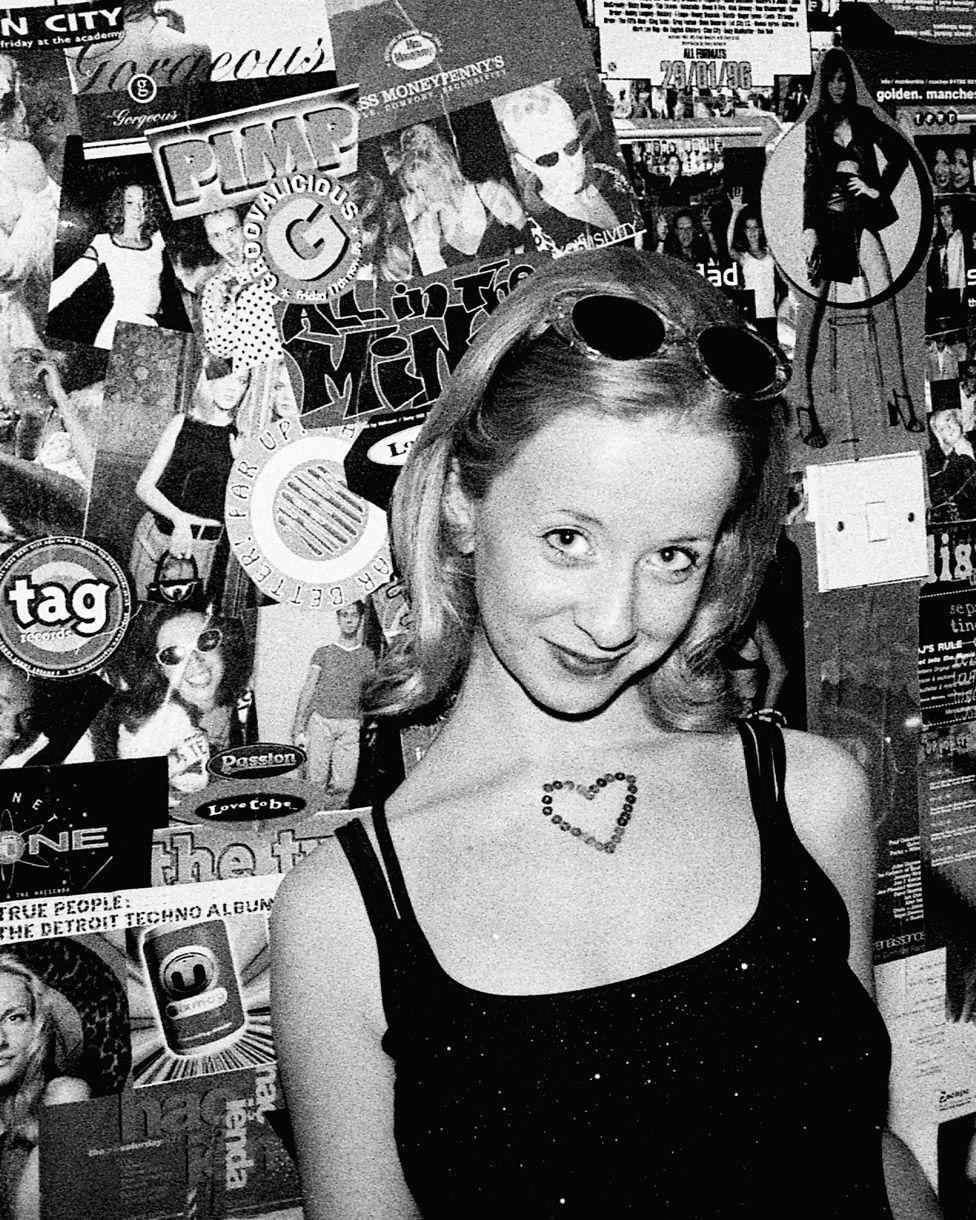 Lucy McCarthy, from Coventry, also photographed the rave scene – but she is the subject of this portrait, taken when she was 16.

“This is her in her bedroom and it was more of a family photograph,” says der Weduwe. “You can see her bedroom wall has been absolutely plastered with photos of raves that she was going to.

“A lot of the photographers we work with learned by photographing their friends and things that they were passionate about, the nights that they were going to. So it’s got that really personal and authentic story to it as well.” 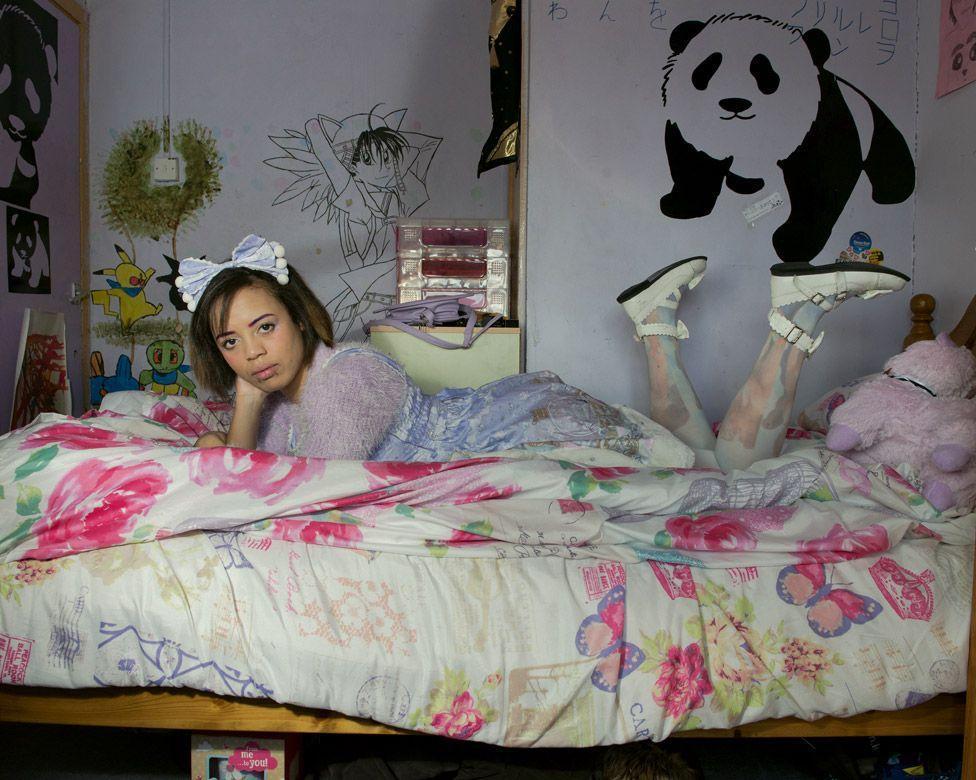 Teenage bedrooms feature heavily, and the gallery has even reconstructed a bedroom as part of the exhibition.

This photo is of Kirsty, and is from a series taken by Michelle Sank of young people from the Black Country in their bedrooms in 2017.

“Michelle Sank is very interested in that period between childhood and adulthood where you’re trying to find your sense of self and it’s filled with excitement and exploration and discovering new things, but that also brings a certain level of anxiety and trying to navigate that,” der Weduwe says. 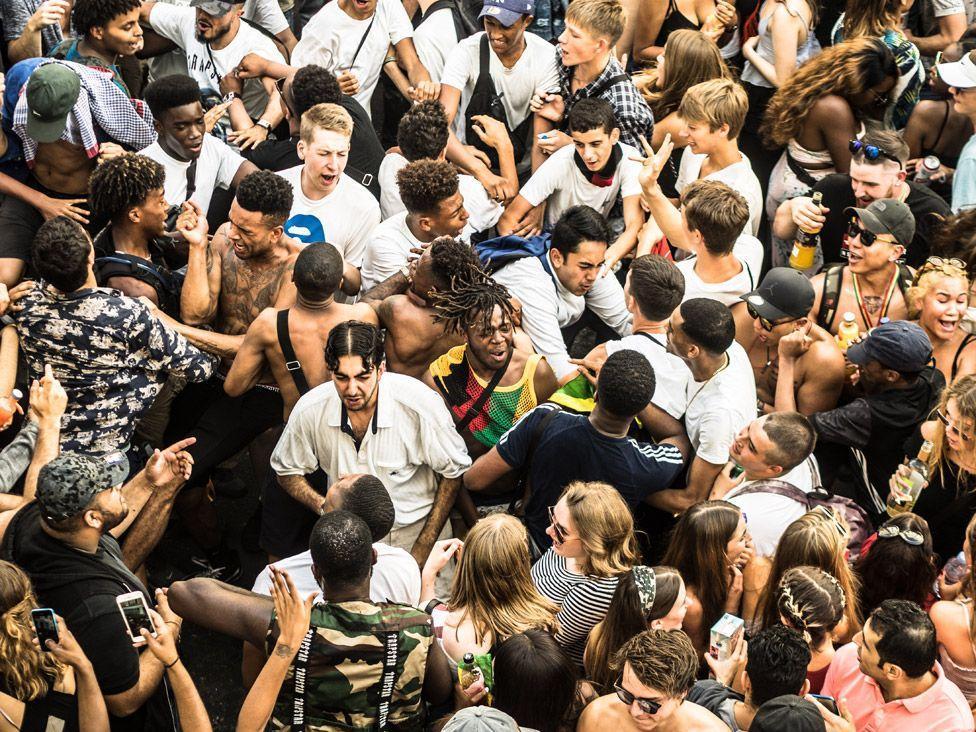 Babycakes Romero photographed the partying crowds outside his window for the Disya Jeneration sound system during the Notting Hill Carnival in 2017.

“I always think his photographs look a little bit like Renaissance paintings,” der Weduwe says. “They really have that energy and you can look at all the individual faces and how people are interacting. This is a mosh pit during one of the DJs of the day.”

As well as working with professional photographers, the museum also asked for the public to send in phots – and received 10,000 as people dug out their photo albums during lockdown. 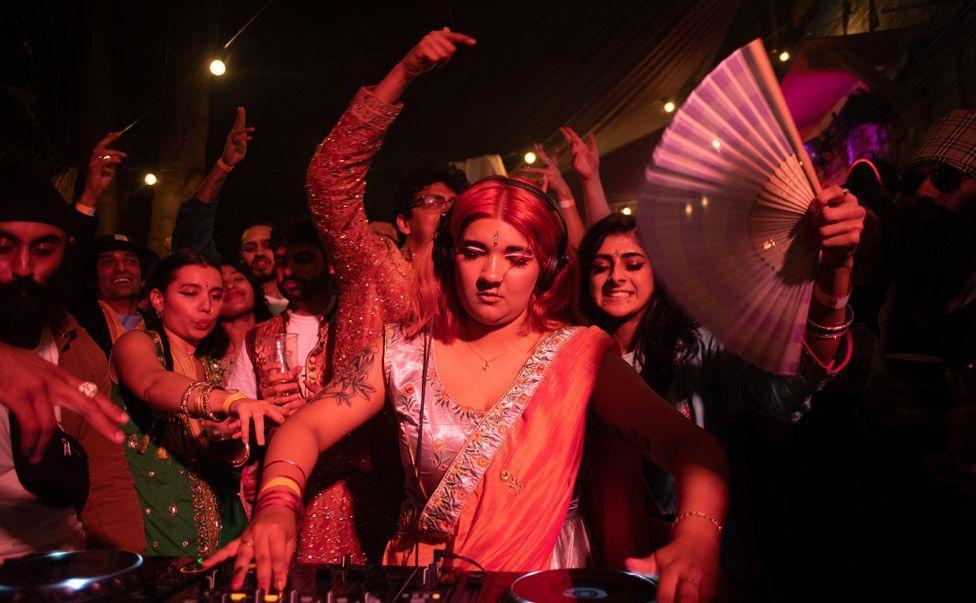 One of the most recent photos is by Aiyush Pachnanda and shows Gracie T DJing at the Colour Factory nightclub in East London last year.

Der Weduwe says she hopes the exhibition will make young people see that what they’re going through isn’t so much different from the past.

“It’s a really powerful thing to be able to connect with your parents’ and your grandparents’ generation as a young person today – to realise that, actually, they were teenagers as well and they probably didn’t get up to that much good and they probably had all these different mixed emotions as well.”

The Museum of Youth Culture’s archive is currently based in London but is planning to move to a permanent home in Birmingham in 2025.

The Grown Up in Britain exhibition is at the Herbert Art Gallery in Coventry from Friday, 1 July, to 12 February 2023.

Climate Change: What we Know and What we Do not Know