Africa-Press – Botswana. The Queen is lying in state in Westminster Hall after a procession from Buckingham Palace. 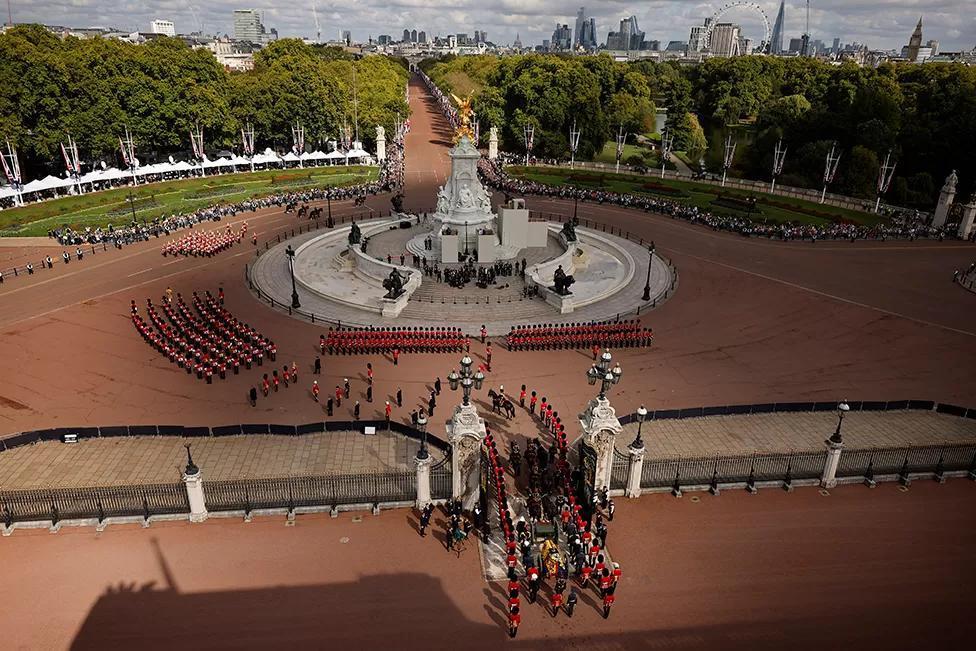 Nearby, Big Ben tolled at 60-second intervals throughout the Queen’s 38-minute journey to the Palace of Westminster. 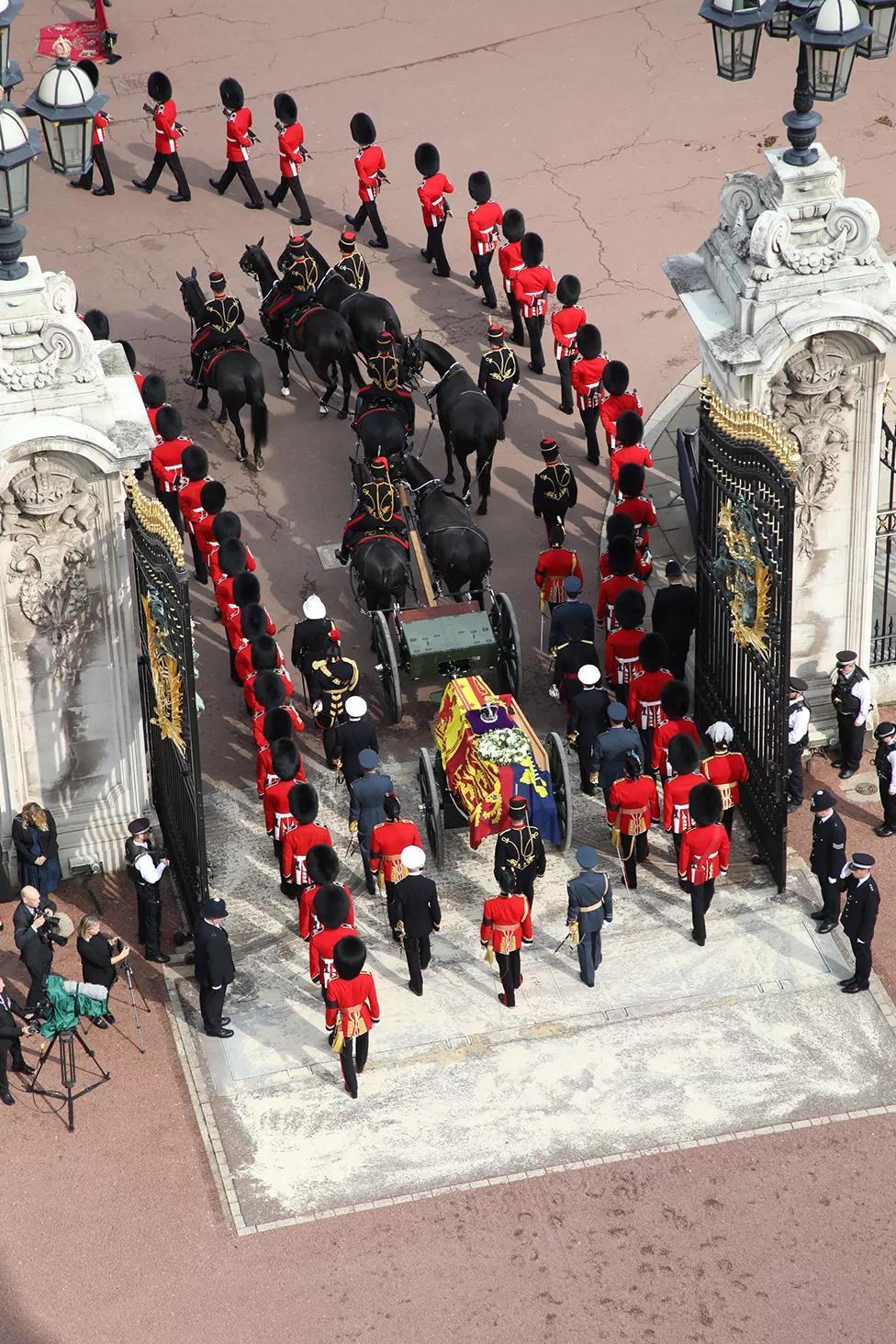 The coffin travelled down the Mall on a gun carriage of the King’s Troop Royal Horse Artillery, pulled by a team of horses bearing riders in ceremonial dress.

The tree-lined boulevard, which cuts through the centre of London, has witnessed countless royal events over the years, including celebrations of the Platinum Jubilee earlier this year to mark the Queen’s 70 years on the throne. 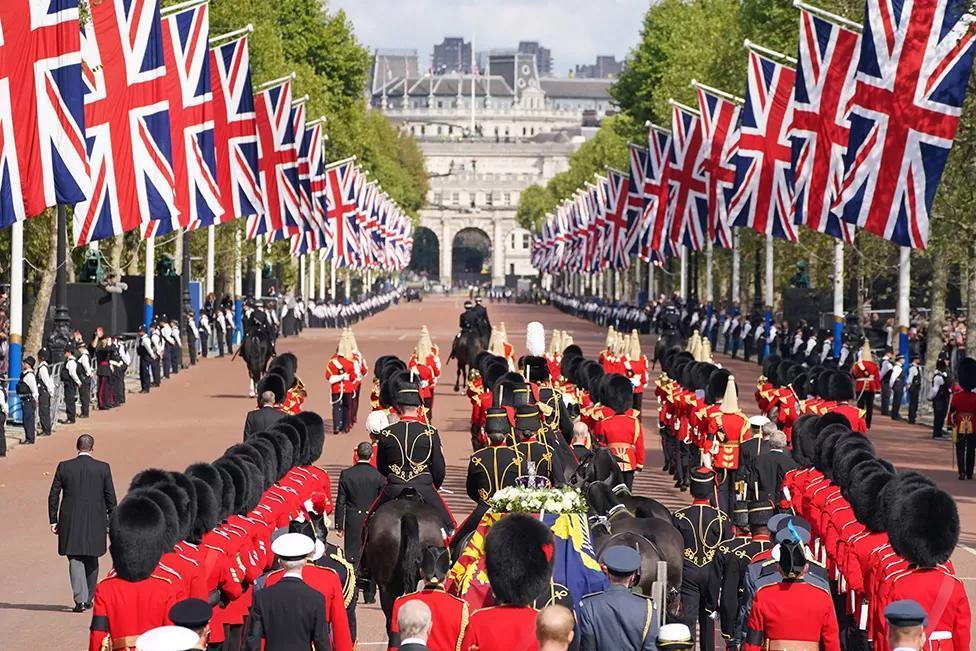 Members of the public lined the Mall, many wiping away tears, some clapping and cheering, as the Queen’s coffin passed by. 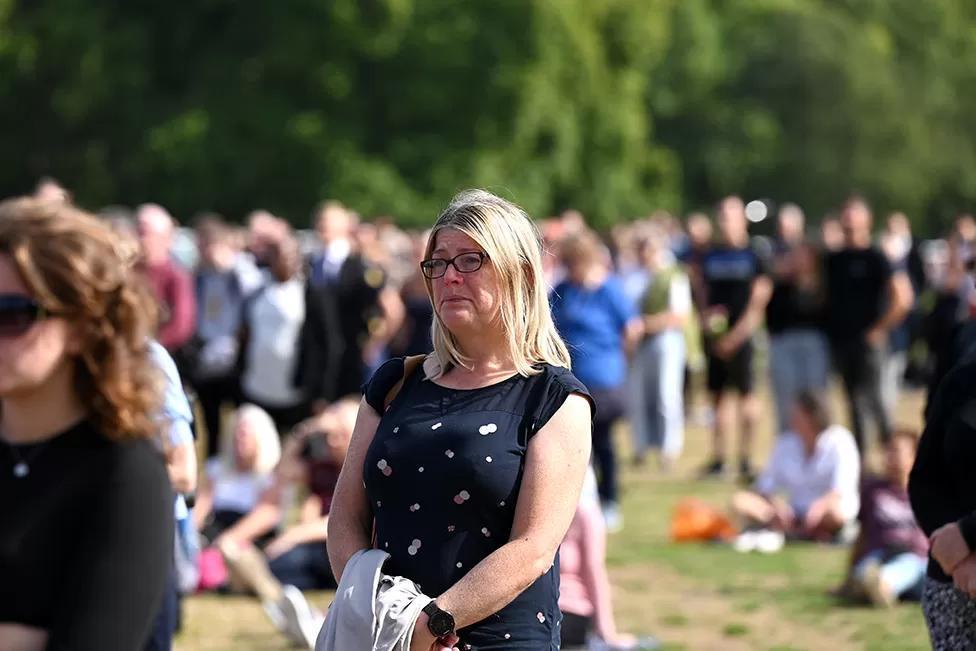 The coffin was draped in the Royal Standard, representing the Sovereign and the UK, with the Imperial State Crown resting on top. 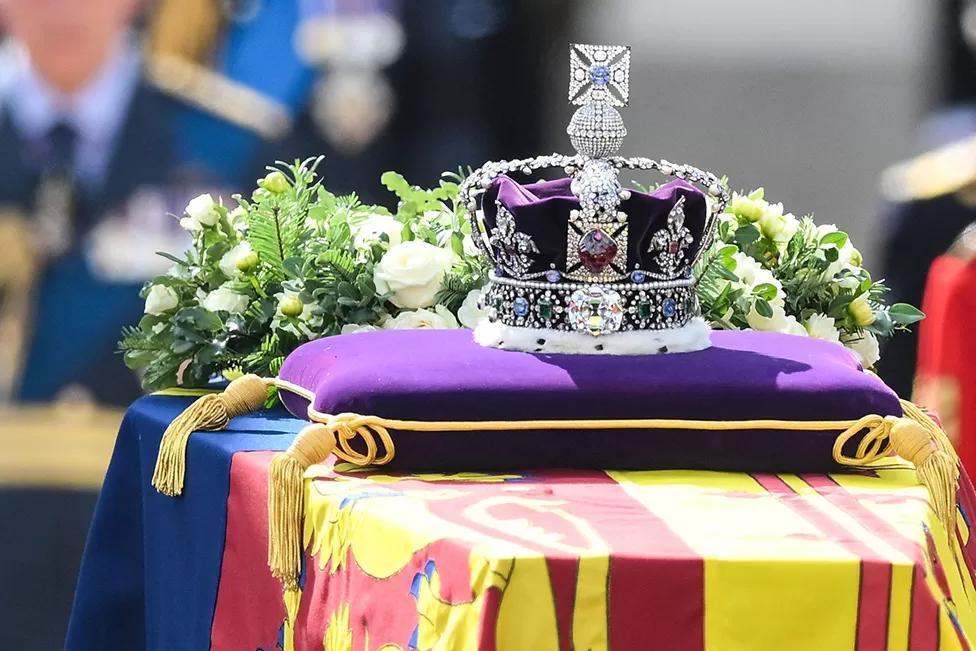 The crown – placed on a purple cushion – features the St Edward’s sapphire, Black Prince’s Ruby and the Cullinan II diamond, cut from the largest diamond in the world. The coffin also bore a wreath of white roses and dahlias. 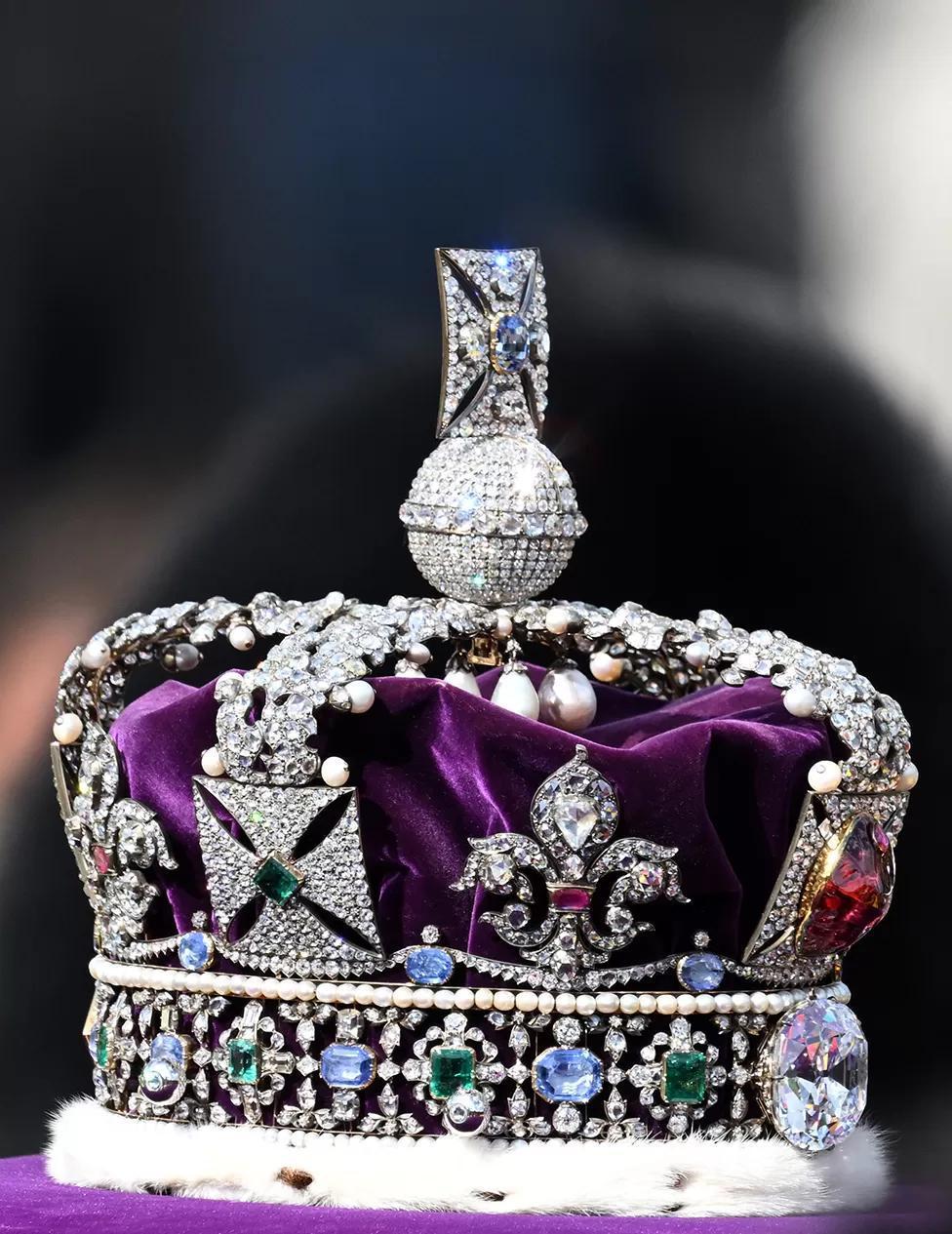 King Charles III was joined by his sons, Prince William, now Prince of Wales, and Prince Harry, in the solemn procession. Other senior members of the Royal Family also took part. 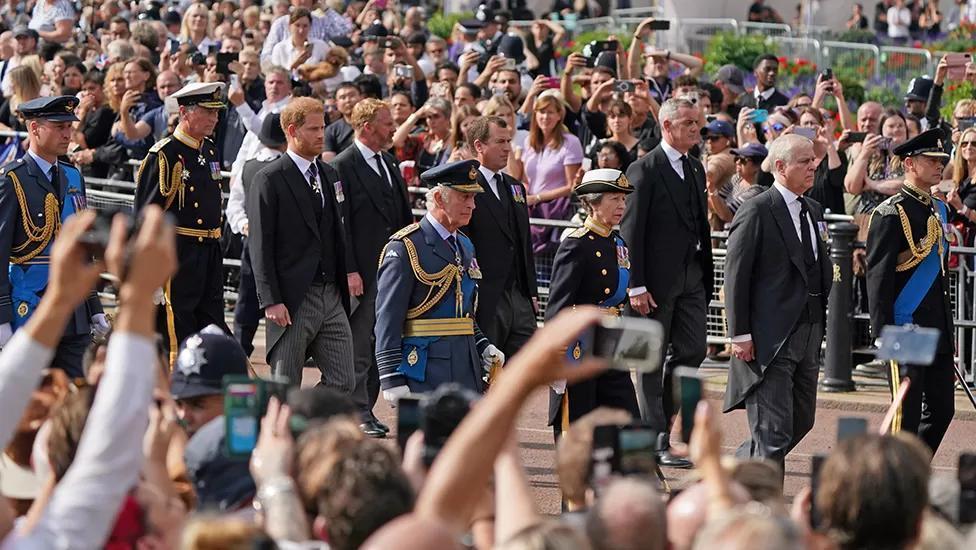 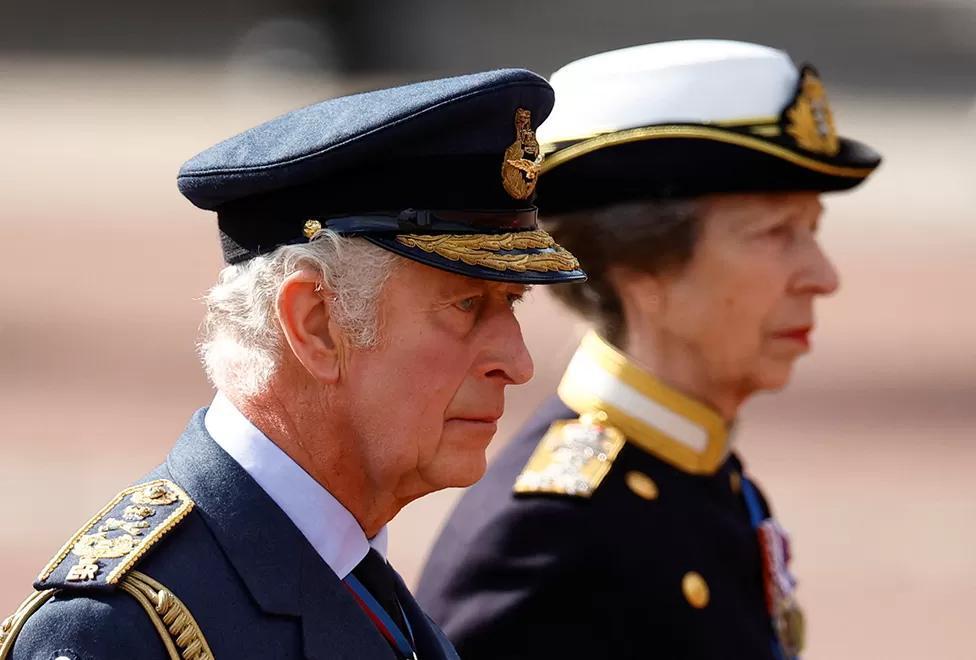 Up to 1,000 members of the armed forces took part in the procession, including the Household Cavalry – represented by the Life Guards and the Blues and Royals. 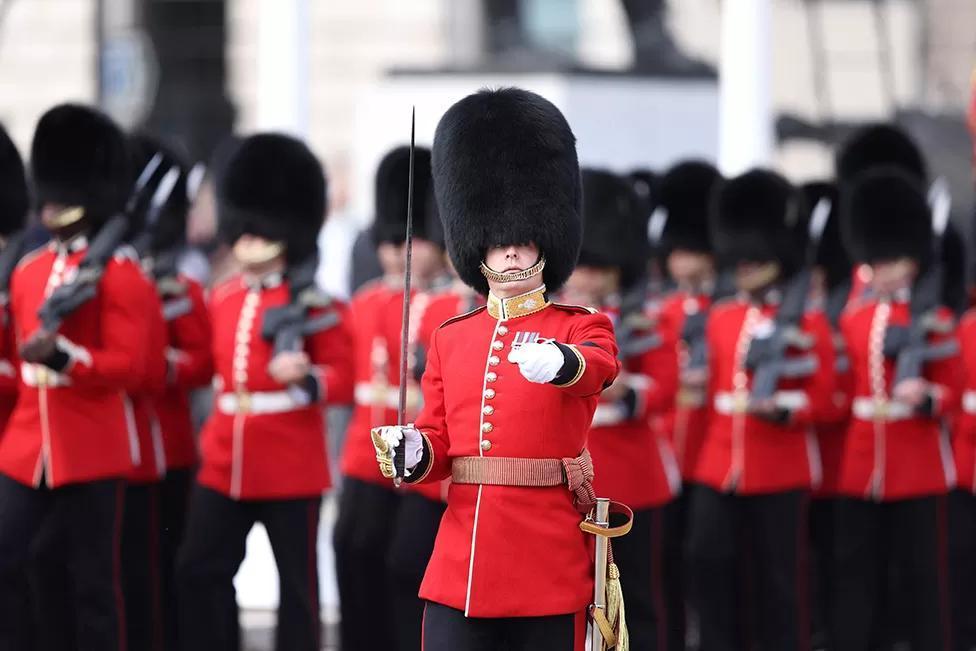 King Charles III, his siblings Princess Anne and Prince Edward, and his son, the Prince of Wales, all wore military uniform. 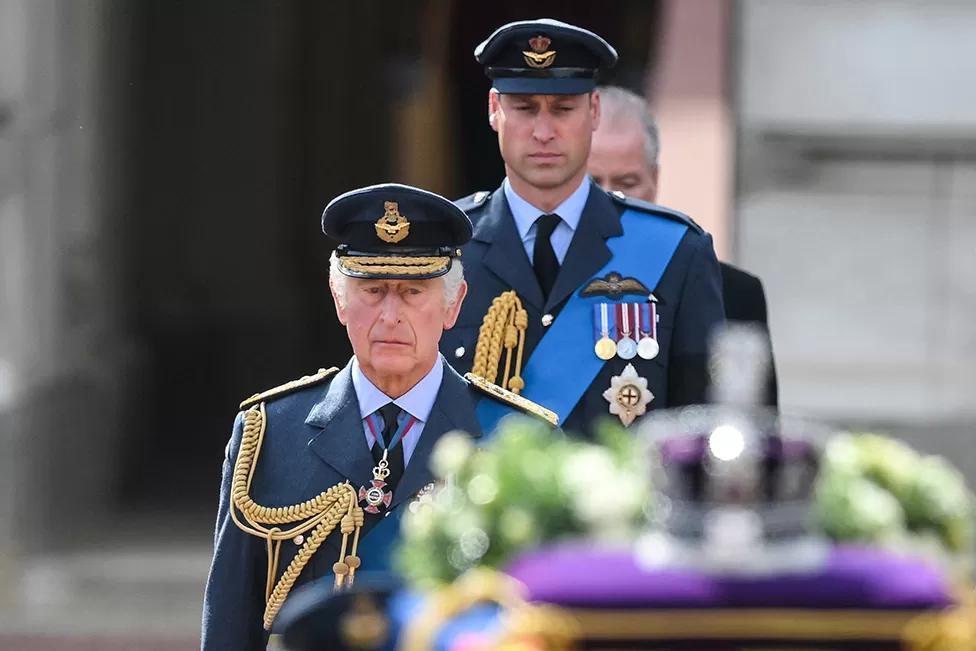 The King’s brother, Prince Andrew, and his younger son, Prince Harry, both wore suits. Prince Harry is no longer a working member of the Royal Family, having taken a decision in 2020 to step back. 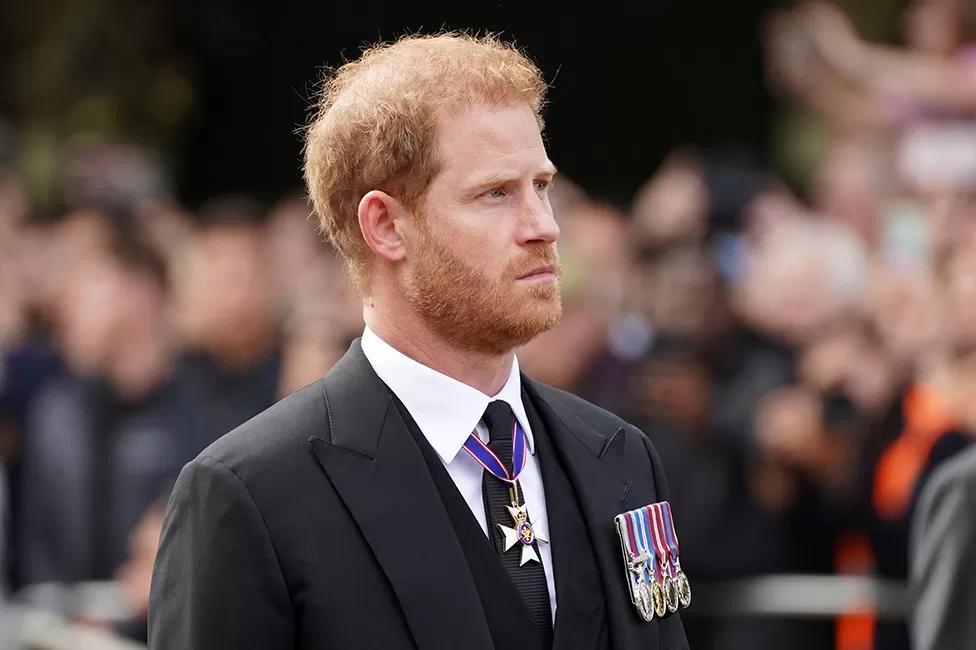 Prince Andrew, too, is no longer a working royal. He lost his military titles earlier this year – shortly before he settled a civil sexual assault lawsuit in the US, in which he denied any wrongdoing.

The Queen Consort, the Princess of Wales, the Duchess of Sussex and the Countess of Wessex all travelled from Buckingham Palace by car, joining the King at Westminster Hall for a short service following the procession. 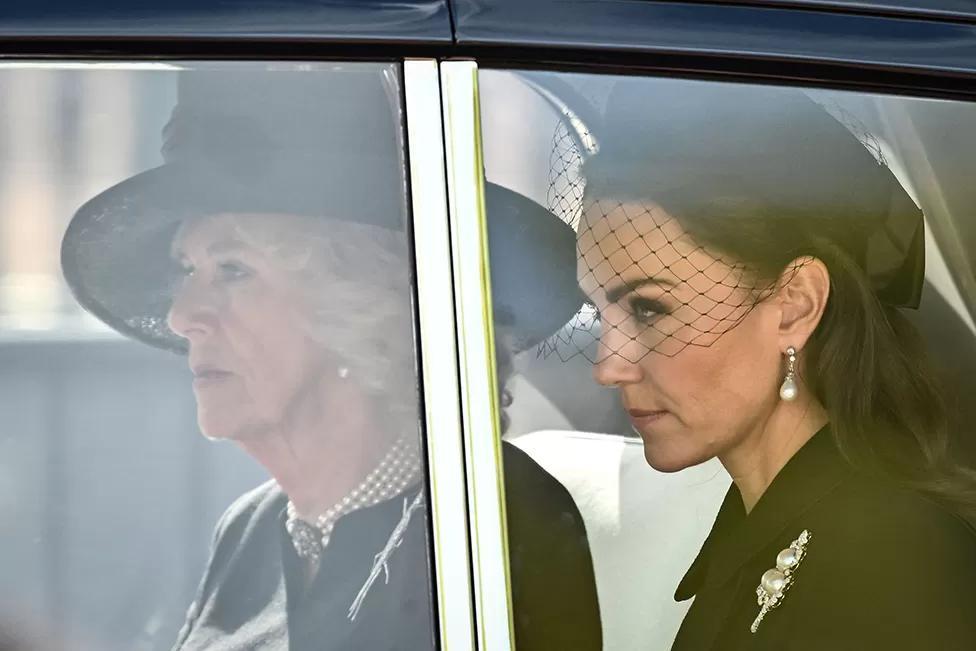 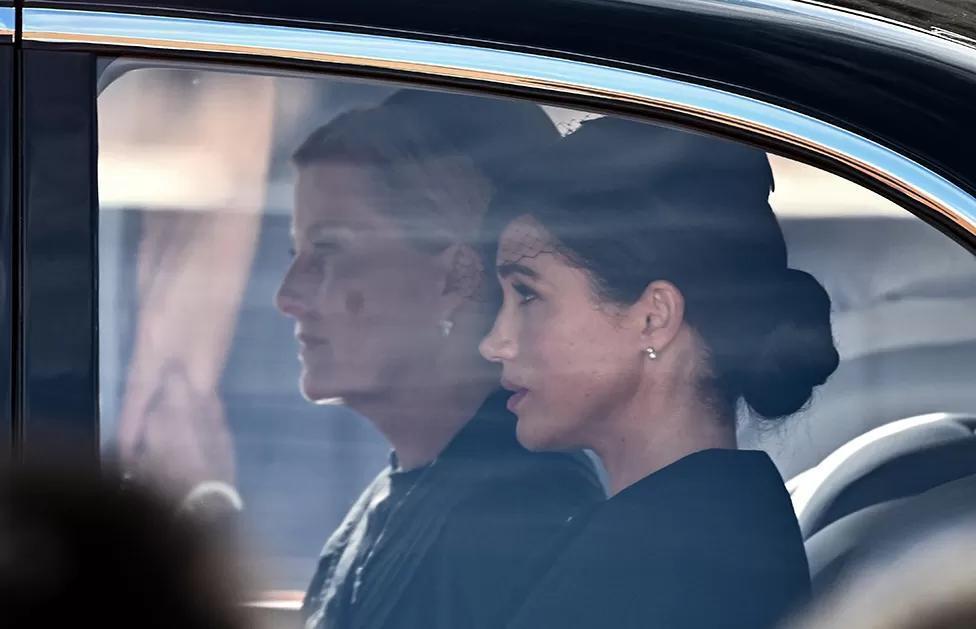 The procession moved along Horse Guards Parade and down Whitehall to arrive at Westminster Hall at 15:00 BST. 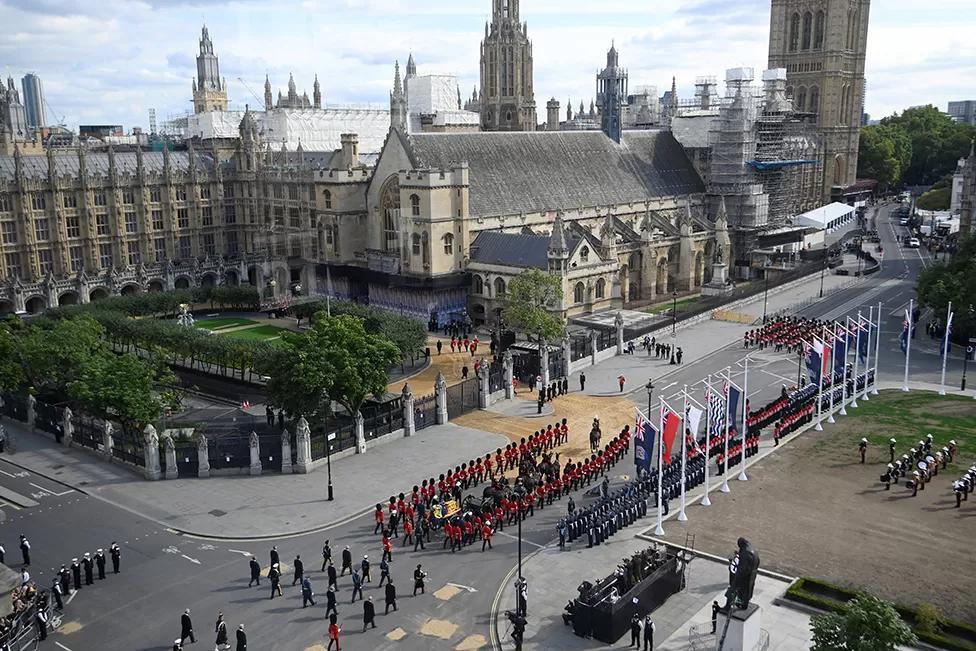 Eight young men from the Grenadier Guards were entrusted with the task of carrying the Queen’s coffin into the Palace of Westminster. 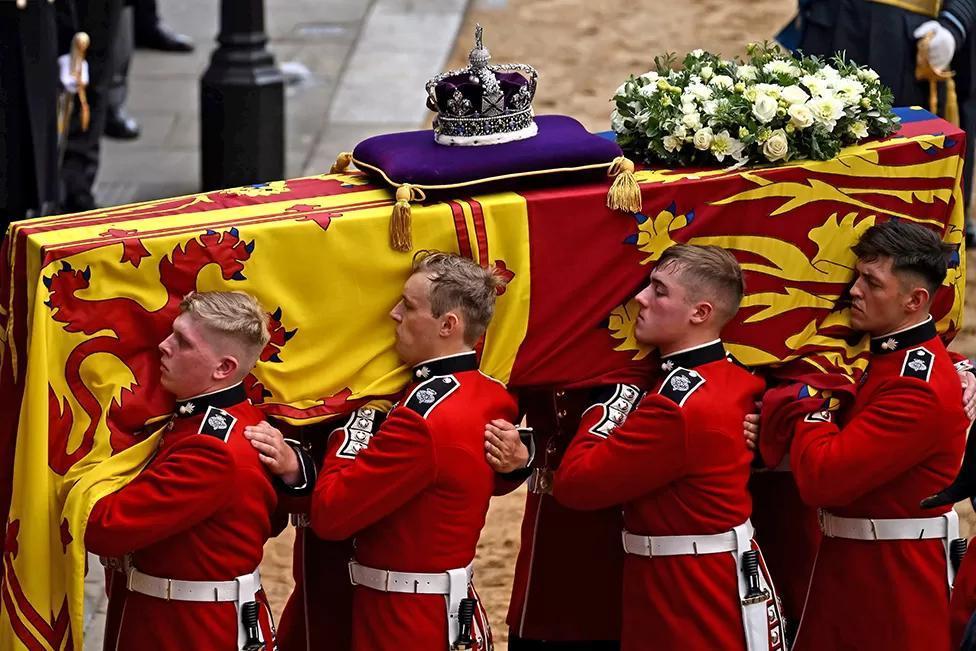 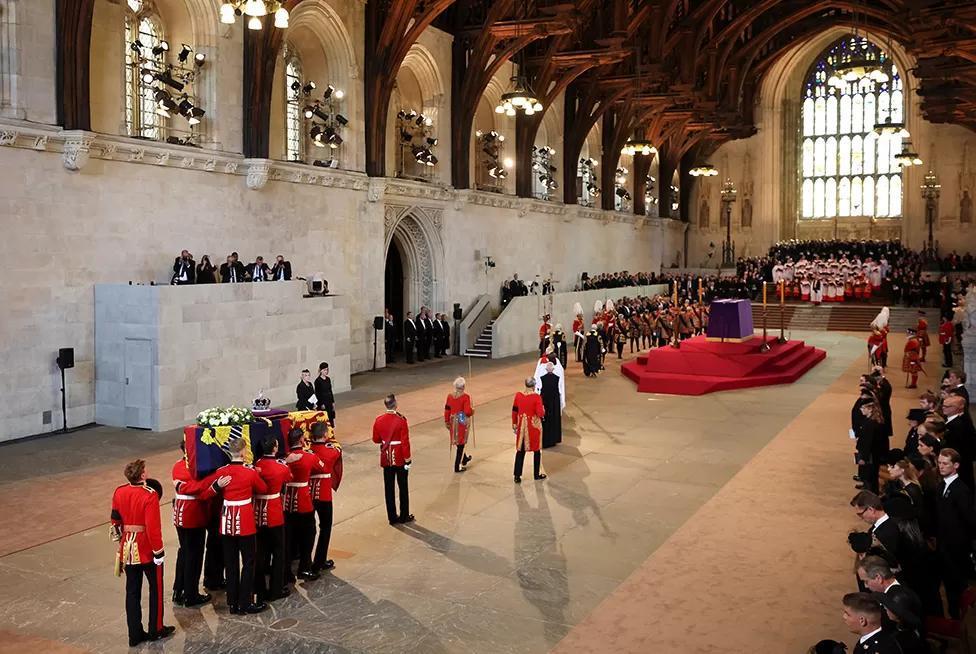 Hundreds of thousands of people are expected to file past the coffin to pay their respects to the Queen over the next four days – with a huge policing operation in place. 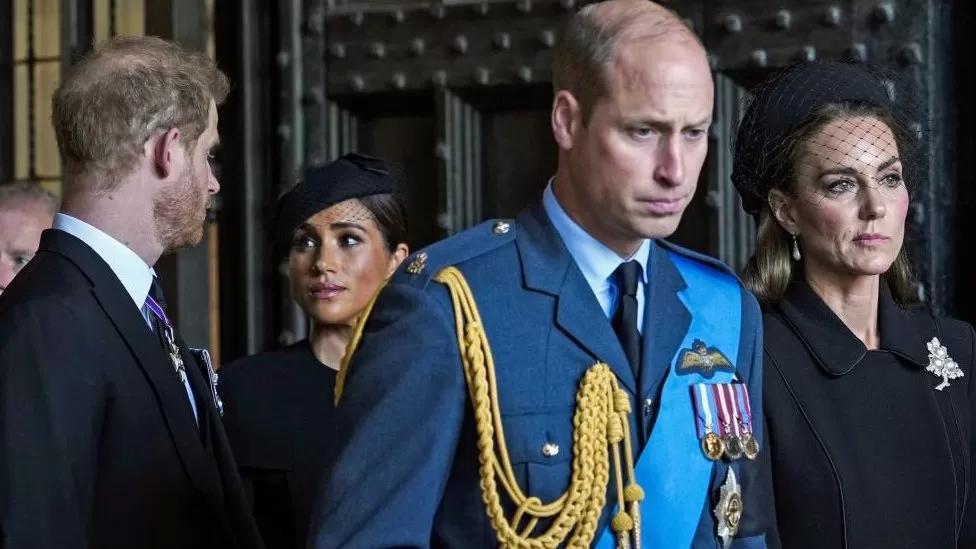 The Duke and Duchess of Sussex and the Prince and Princess of Wales. 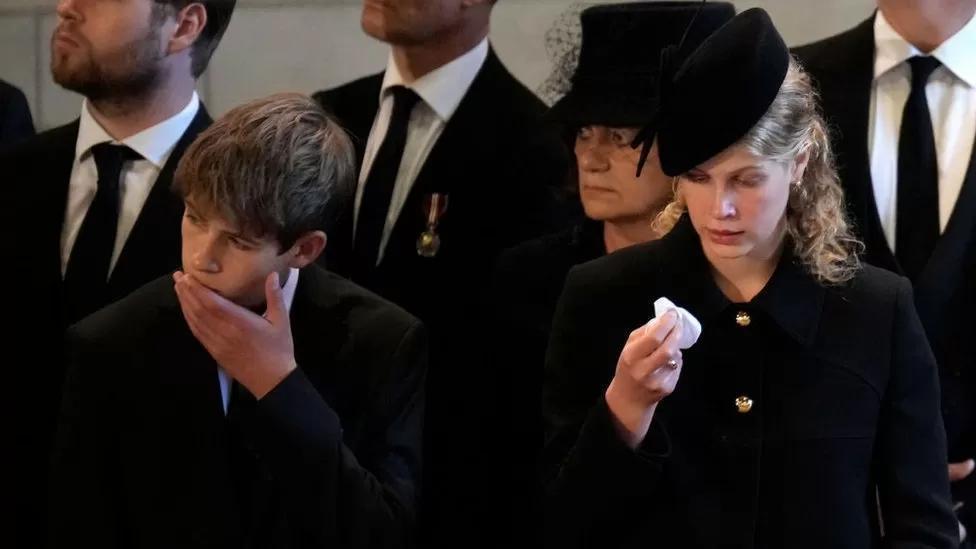 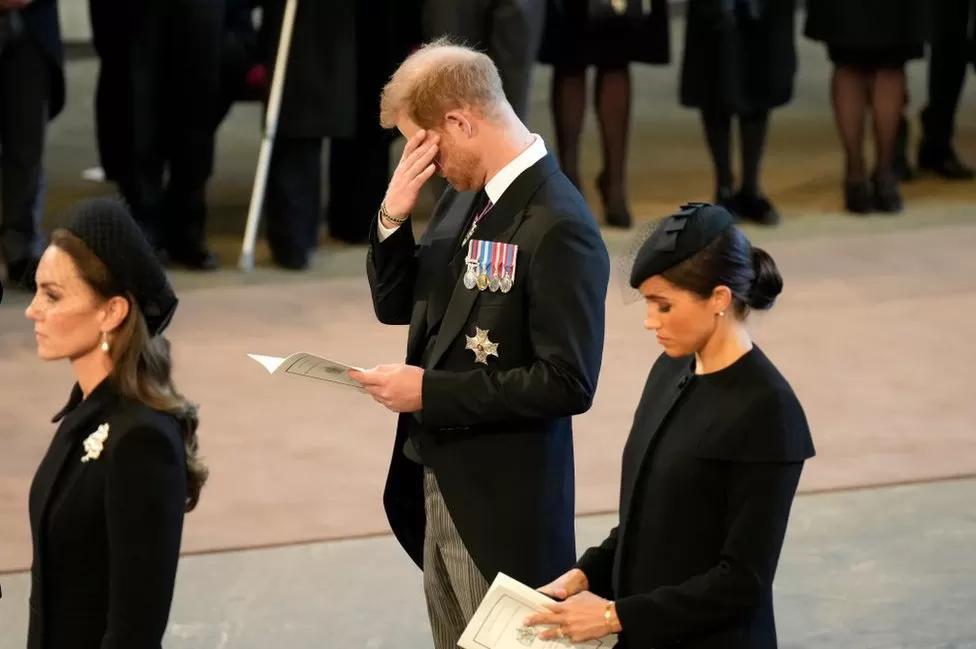 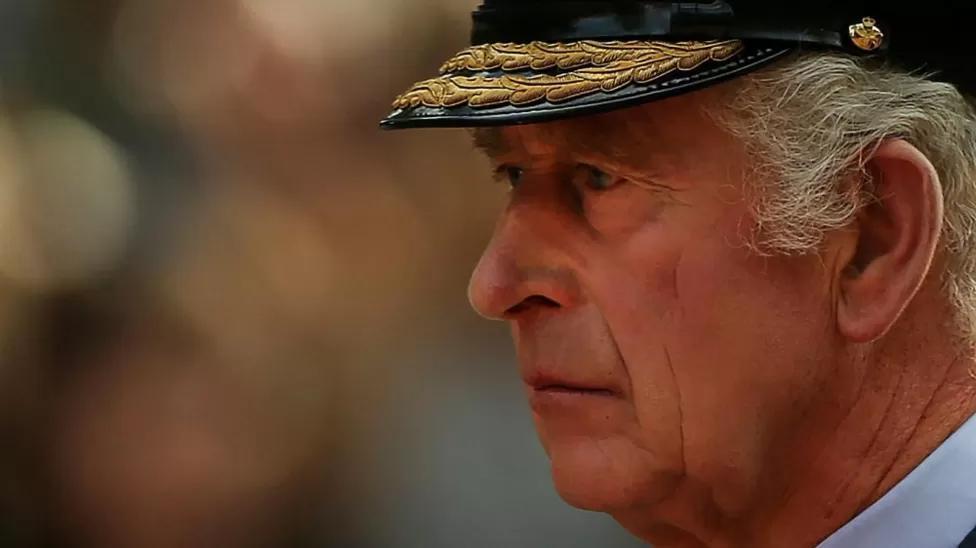 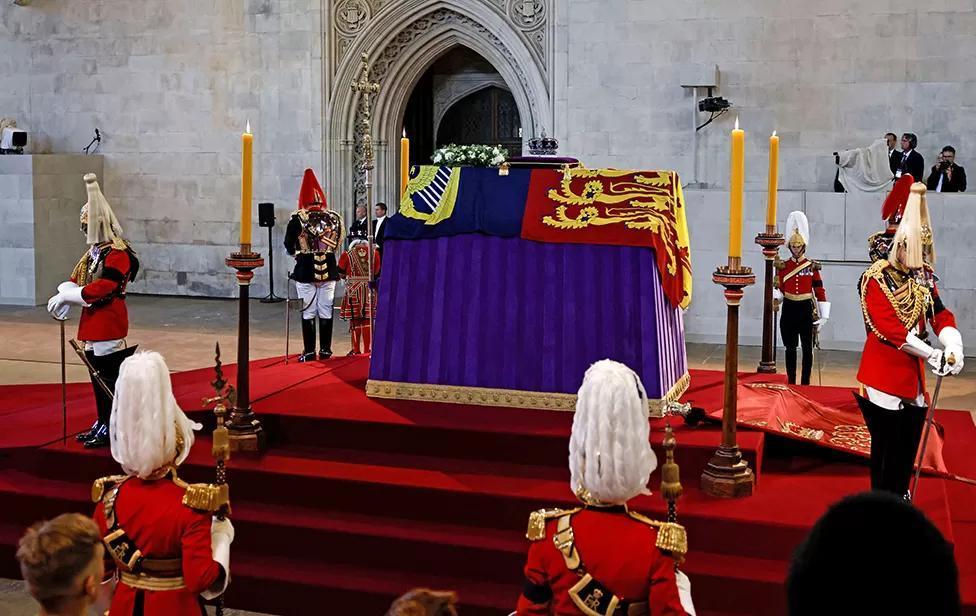 Earlier in the day, guards waited for the Queen’s coffin to emerge from Buckingham Palace. 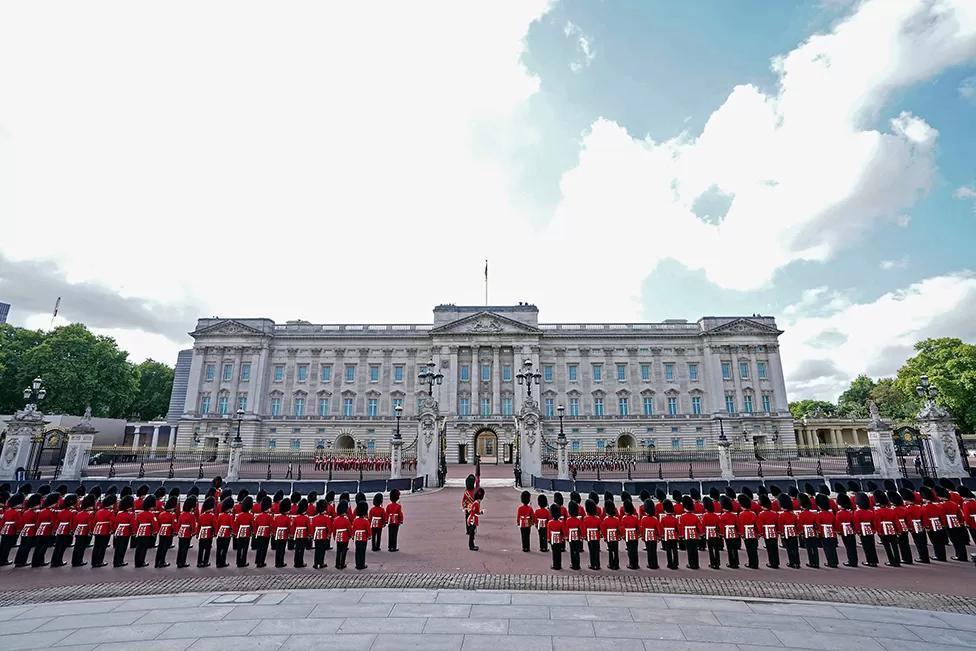 And large queues formed along the banks of the River Thames, as people waited for the Queen’s lying-in-state to begin. 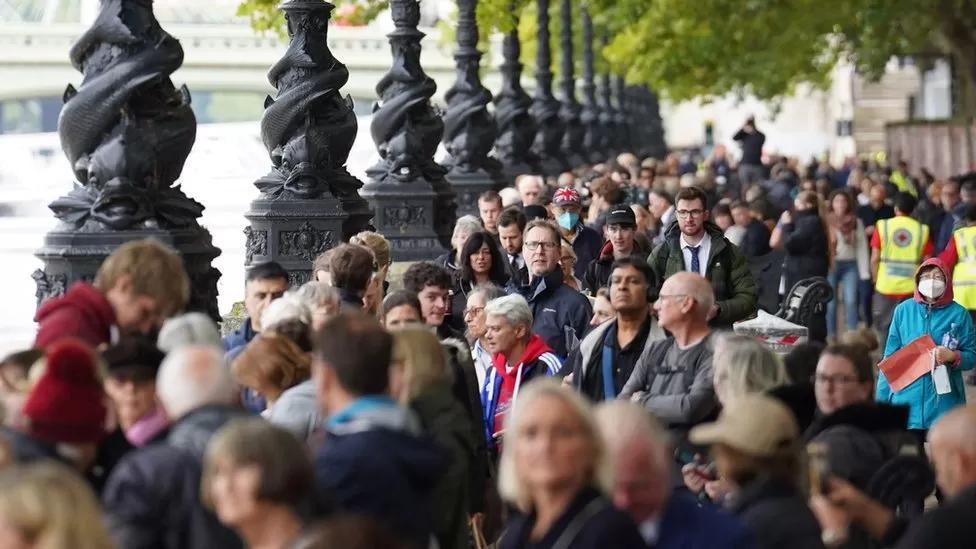 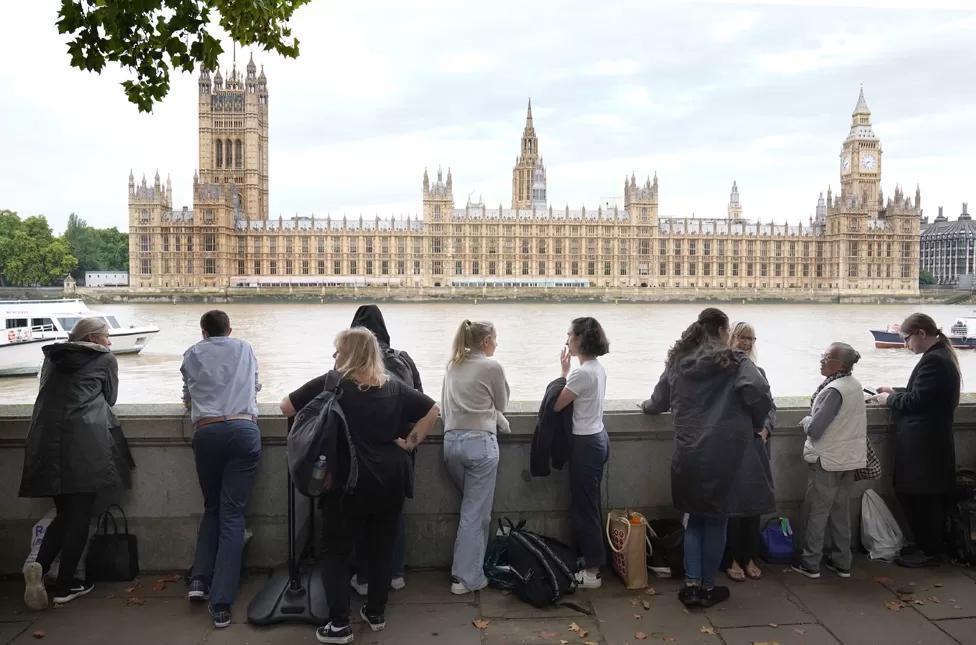 The late Queen will lie in state inside Westminster Hall until the morning of her funeral, to be held on Monday 19 September. 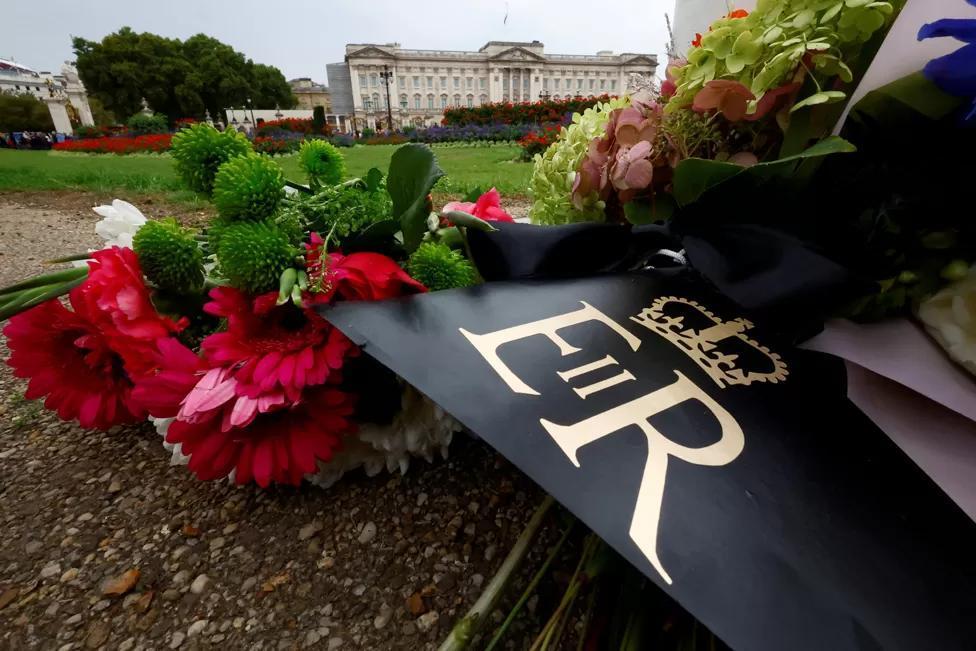