Africa-Press – Eswatini. Coral has recovered from storms and bleaching events to record levels across much of Australia’s Great Barrier Reef, a survey has found.

The reef’s northern and central parts have the highest amount of coral cover since monitoring began 36 years ago.

But coral cover in the southern part of the reef has decreased.

The new coral is particularly vulnerable – meaning the progress could be quickly undone by climate change and other threats, officials say.

After the fourth mass bleaching in six years was confirmed in March, Aims had grave concerns ahead of this year’s study.

“In our 36 years of monitoring the condition of the Great Barrier Reef we have not seen bleaching events so close together,” said chief executive Paul Hardisty.

Bleaching occurs when corals stressed by warm water temperatures expel the algae living within them that gives them colour and life.

Only two mass bleaching events had ever been recorded before 2016.

This year’s bleaching event was the first to occur during a La Niña, a weather phenomenon which typically brings cooler water temperatures. 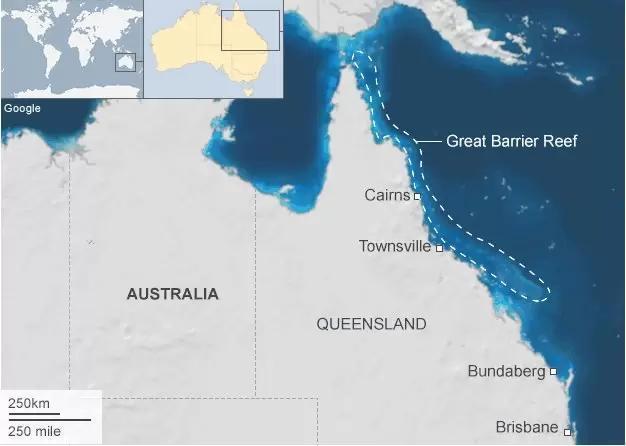 These latest results demonstrate the reef can recover if conditions allow, Dr Hardisty says, but “acute and severe disturbances” are becoming more frequent and longer.

Why is the Great Barrier Reef in trouble?

The reef has also been damaged by coral-eating crown-of-thorns starfish and tropical cyclones which generate damaging waves.

Much of the new coral growth – a species called Acropora – is especially exposed to the reef’s threats, said Dr Mike Emslie from Aims.

“This means that… future disturbance can reverse the observed recovery in a short amount of time,” he said.

The Great Barrier Reef has been World Heritage-listed for 40 years due to its “enormous scientific and intrinsic importance” as one of the most biodiverse ecosystems in the world.

The Great Barrier Reef Marine Park Authority, which manages the reef, says the outlook for the icon is “very poor” due to climate change.

Unesco, the UN’s scientific and cultural body, says not enough is being done to protect the reef.

Eswatini projected to plunge into recession and food insecurity