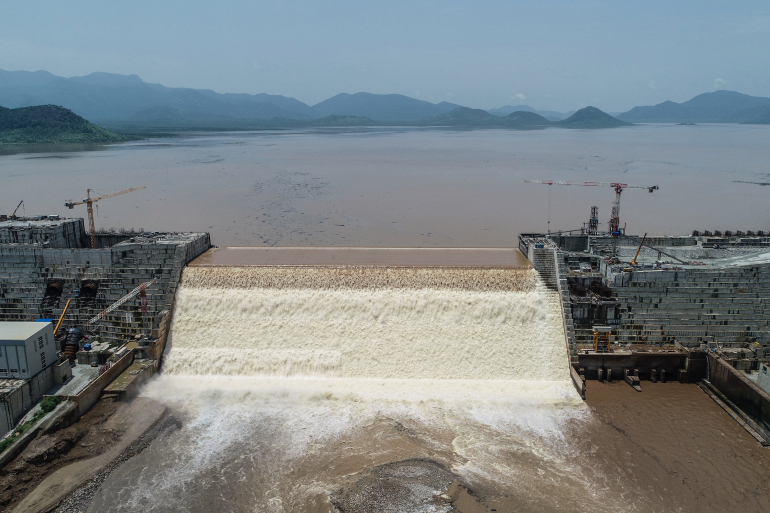 Africa-Press-Ethiopia Ethiopia has started generating electricity from its new dam across the Nile River. Egypt is furious. Or is it?

The day after the dam was activated, Egypt repeated its demand for a binding agreement to safeguard its supply of water from the Nile, with a definite or-else tone in the background.

The Grand Ethiopian Renaissance Dam is the largest hydroelectric dam in Africa and the seventh-largest in the world. It’s larger than Egypt’s own Aswan High Dam about 2,000 kilometers downstream.

Someone new to the subject might think that those are the only dams ever built across the Nile, one of the world’s greatest, noblest, and history-laden waterways. In fact, the first dam was built near the site of present-day Cairo around 2,650 BCE, or more than 4,000 years ago.

In recent times, there’s the Aswan High Dam, completed in 1970. A recent count shows that 25 hydroelectric dams have been built on the Nile in the past 50 years, and eight more are in the planning or construction stages.

The Aswan High Dam created an enormous artificial lake that has lessened the annual threats of flooding and drought downstream in Egypt, along with providing electricity and irrigation.

Now Ethiopia has done the same and Egypt is not taking this lying down. Or at least that’s what its leaders say.

A year ago, Egyptian President Abdel Fattah el-Sisi warned: “I am telling our brothers in Ethiopia, let’s not reach the point where you touch a drop of Egypt’s water because all options are open.”

It certainly looked like a crisis when I wrote this in Cairo in 2012. It’s in my first book, Broken Spring.

“Any perceived threat to the waters of the Nile sets off near-panic in Egypt. Estimates of the proportion of Nile water originating in Ethiopia range up to 70%. Images of the Nile’s level dropping by 70%, to the point where you could walk across it without getting your ankles wet, dance across the minds of Egyptians in a daytime nightmare.

A decade later, what has Egypt done to carry out its threat and defend its water supply? Egypt obviously always had the military capability of attacking the dam, destroying, or severely damaging it. In 2020, then-US President Donald Trump declared that Egypt would have to “blow up that dam.”

Headlines and threats screamed across the front pages of Egypt’s main newspapers in February, when the new dam was activated. Just a week later, though, it was out of the main newspapers in Egypt, except for an objective analysis here and there.

So is this a new way of dealing with international disputes? Complain, denounce, threaten – and leave it at that?

There is some underpinning to that notion. Decades ago, an expert pointed out a difference between Middle East society and Western practice. In the West, if politicians make promises, they’re expected to fulfill them, or cynically not to. In the Mideast, if leaders make pronouncements, it’s as if they already did something concrete. No action is needed. The people take note and go on about their lives.

Does this translate to other cultures, other wars? Only in a limited way. Clearly, the war in Ukraine can’t be put back in the bottle by belligerent declarations. The Israeli-Palestinian conflict is rife with threats and denunciations, but they often lead to actual violence – so even if the rule applies, it applies only partially.

Even so, we have seen this phenomenon often in the Middle East, though we usually don’t recognize it. Over the years, Arab leaders have denounced Israel in graphic terms, blaming Israel for everything that’s wrong in the world, making bloodcurdling threats – while cooperating with Israel under the table in economic and security fields.

Iran is the best example of how this verbal system works.

Hardly a week goes by without some threat or another against Israel from the Iranian regime. There is no doubt that Iran is gearing up for nuclear weapons. It could launch a conventional attack anytime it chooses. But so far, at least, it hasn’t done much concrete against Israel. The threats are the actions, at least up to now.

The reason is clear. Israel can retaliate against Iranian aggression so harshly that even the ayatollahs of Tehran realize it’s not in their interest to poke the Israeli bear.

That does not mean, of course, that Israel can let down its guard and turn its swords into plowshares. It does mean, however, that Israelis don’t need to either shake in their boots or lash out aggressively every time someone says something nasty.

Keeping things in perspective, while keeping the powder dry, is a good way to maintain mental health in this challenging era.