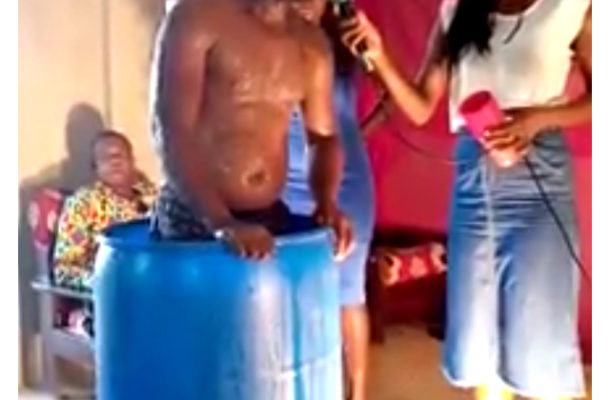 A disgusting video has erupted on Social Media of a so called Pastor bathing in a large blue water container in a church.

After the act his gullible members both men and women queue to have a taste of the his bathing water.

One of the ushers holds a disposable cup near the pastors where each member is given one and the pastor fetches the water for that fellow to drink.

In the video the Pastor calls out the church as End time Church of Pent and he says that it is now time for them to drink the water which through God’s divine direction he has done.

He then starts by instructing the church elders to first come for their before the church members.

Whiles talking the women with the mic could be heard shouting amen!!! anointing!!…while sharing the mixture one man could be heard telling the pastor his water is too small.

According to him it’s a direction from God and that its some form of spiritual cleansing for his congregation.