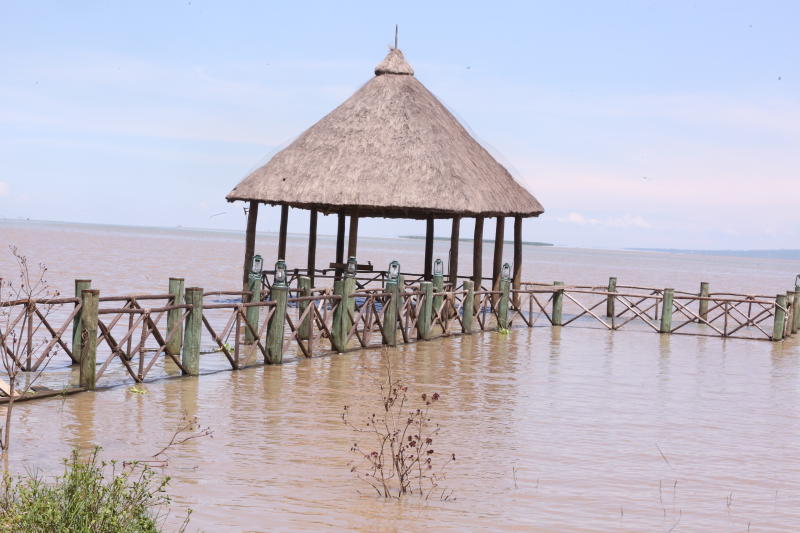 AfricaPress-Kenya: Kenya Wildlife Service (KWS) could be forced to part with millions of shillings in competition after the rising levels of water in Lake Victoria forced wild animals to migrate into homes near the shores, escalating the human-wildlife conflicts.

The parastatal is also starring at huge loses after the surging waters submerged huge parts of its two popular National parks, Kisumu’s Impala Park and Ndere Island in Siaya, threatening the lives of hundreds of animals.

Senior KWS officials yesterday confirmed that two people had been attacked and killed by hippos and crocodiles within the county in the past two months.They have been receiving an average of 100 complaints per month from people either beaten by snakes slithering away from the advancing waters or attacked by hippopotamus and crocodiles whose habitat had been destroyed.

Villagers living around Dunga in the outskirts of Kisumu town bear the brunt of floods and attacks by the animals.One victim, Ken Abura fled his home after he woke up early this week to find a huge hippo bathing in waters that had flooded his compound.Records from KWS seen by The Standard indicated that in the past three months the number of cases has rapidly increased to 300.

The increasing number is a result of the rising water levels in Lake Victoria which has left a trail of destruction, displacing wildlife and forcing them to invade homesteads killing domestic animals, destroying crops, and causing adverse human injuries.Samson Onyango a resident of Kapuothe area claimed to have lost 10 acres of his maize crop plantation to hippos.

Onyango who made a report to KWS said they had assessed the level of destruction and promised to compensate him for the loss.“The hippos and crocodiles make their way to my home destroying crops and killing animals, it’s devastating and scaring,” said Onyango.

Another victim at Usoma area, Ali Juma protested the slow-paced compensation from the KWS. Juma claimed even after reporting the matter of several attacks on his family by wild animals no action has been taken.Juma said hippos have destroyed his 20 acres of rice fields and a baboon attacked and injured his son last week.“No one has come out to help me.  I have been left with nothing. The hippos, crocodiles and baboons have wreaked havoc to my family and the land,” he complained.

Helen Oganda a resident of Dunga said two days ago a group of ten hippos invaded his cowshed, killed 10 goats and 15 sheep, a matter that she reported to KWS.Reports at KWS shows two people have been attacked and killed by wild animals.

One died in Seme after a crocodile attack while the other was attacked by two hippos at his home in Usoma area.More than 100 domestic animals; sheep, cow, goats have been killed by wild animals and huge chunks of crop fields destroyed by hippos.But apart from staring at a huge amount of compensation to victims, the officials at the KWS reported having lost 30 per cent of their land, tourism sanctuaries at the Impala Park in Kisumu and Ndere Island to the raging lake waters.

The water back flow has destroyed Fauna and Flora in the parks. It has also forced the closure of one of the best hotels in Kisumu, The Eco Lodge, located inside the Impala Park. All these have made the KWS lose millions of shillings in revenue.

The KWS Deputy Warden for Kisumu County-Joseph Nyongesa confirmed that the increasing water levels had led to the increase in the number of human-wildlife conflict cases and officials were overwhelmed and desperate on how to rescue residents and their properties.

“We receive distress calls, residents want help, we are overwhelmed and there is little we can do to stop the wild animals from invading residents’ homes and farms,” said NyongesaHe added the most affected are residents living on areas bordering the lake which include Seme, Nyakach, Nyando and outcasts of Kisumu CBD.