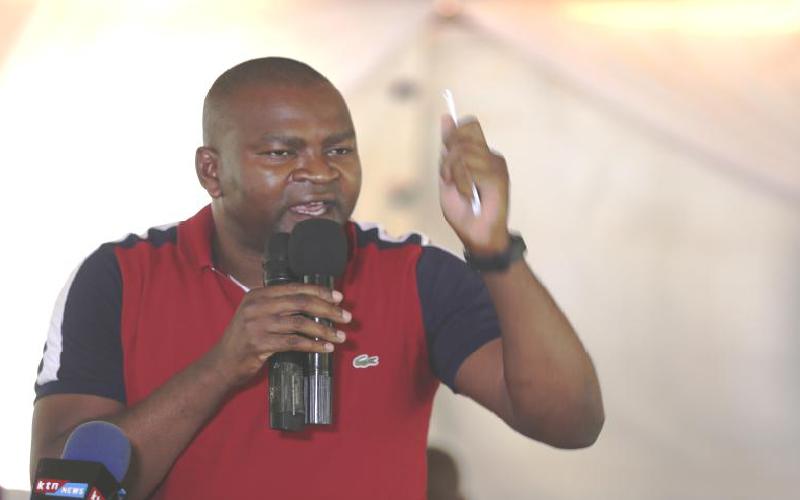 Atwoli who spoke to the media on Echesa’s arrest on Friday minutes before his arraignment to face fraud charges in Sh39 billion arms’deal declared that the ex-CS is suffering for disrespecting elders like him.”I cursed the boy, I said I will see him go down. I told him I was his father, his elder, even if I was naked, he needed to cover me. Even if his father was naked, he needed to cover him,” he said.”You don’t talk let your father go naked, I told him I would watch him go down and he would never see me going down,” added Atwoli.

In January 5, 2019 during the burial of Lugari MP Ayub Savula’s daughter, Joanne Chepchirchir at Manyonyi village, Atwoli asked God to punish Echesa for being disrespectful and unappreciative.The Cotu boss recounted how Echesa frequented his home to ask for financial assistance.“It is a shame that the young man (Echesa) went public about my family issues. I regard him as a son and he should have known better not to tell people how my (estranged) wife would nag him for financial support,” Atwoli claimed. He went ahead to recite a curse facing the sun.

“If Echesa ever benefited from my hard-earned cash, let him know no peace in his entire life,” Atwoli declared.In less than two months, Echesa was sacked and replaced by former Education CS Amina Mohammed.

Fast forward, on February 13, Echesa was arrested in Sh39 billion fake military equipment scams, prompting the Cotu boss to speak out on his arrest.Atwoli also slammed the office of the Deputy President where documents of the fake contract deals which led to Echesa’s arrest is alleged to have been signed.Atwoli said he has been vindicated for always maintaing that  there are people who are not fit to lead this country.

“If such documents can be signed in your office, then it means if you become president, you will carry Central Bank on your back and disappear with it,” Atwoli said in a statement direct to Deputy President William Ruto.Atwoli challenged those in leadership to shun corruption, stating that it would cripple the economy of the country, if left unchecked.

“The culture of corruption is already in the public domain. You know people were surprised that someone who did not go to school, how did he get his position into the cabinet?” Atwoli questioned.

Echesa has, however, denied forgery charges in a case involving an alleged fraudulent arms deal, terming his arrest political.He appeared before a JKIA Magistrate Court on Friday, where his lawyers denied documents related to the Sh39 billion case were recovered in his car.The prosecution asked the court to hold the former CS for 21 days as detectives travel to the US to check the documents’ authenticity.

The case revolves around a fake tender deal to supply the government with military surveillance equipment, guns, and ammunition.His arrest followed a complaint by two gun dealers who claimed he had swindled them Sh11.5 million they had paid as ‘consultancy fees’.