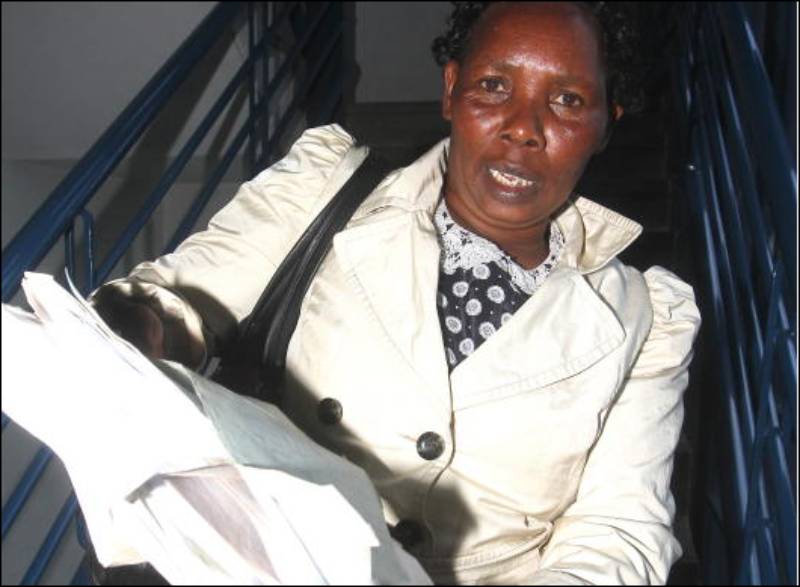 What a day it was when the patriarch affixed his thumb print to the title deed. Mbucho Waweru thought he had secured the heritage of his two wives and their children.

And the Ministry of Lands duly entered Mr Mbucho’s name as the undisputed owner of Kiganjo/Nembu/86, measuring 7.5 acres.This was on February 6, 1958. But he was dead wrong.The inheritance has turned out to be like the Biblical Naboth’s vineyard, which has brought Mbucho’s descendants nothing but sorrow and numerous court cases which have drained their finances.

The tussle has sucked in powerful forces in the moribund provincial administration, the Court of Appeal and the Directorate of Criminal investigations.The State actors are joined by bitter relatives who are trying to wade through the 68 years of family loathing and hatred compounded by elusive truth concerning the real ownership of the disputed land.And like an insatiable monster, it has swallowed four widows, a step brother, a son and a daughter in six decades.

The battle was initially triggered by Muthoni Muraga and Njoki Muraga. The two, who had been married to Mbucho’s step brother Muraga, filed a case in 1976, demanding a share of the land. Since by then the two brothers, Mbucho and Muraga were dead, the two widows were demanding half of Mbucho’s land from his widows, Mumbi and Wanjiku.

They argue that the land had been registered in the name of their father-in-law, who was coincidentally named Waweru Mbucho.In defense Mumbi and Wanjiku said that Muraga had sold his inheritance and that her widows had been allowed to live on Mbucho’s land on humanitarian ground.

Thirteen years later, High Court Judge James Frank Shields, declared on May 30, 1989  that since Mumbi and Wanjiku were not the registered owners of the disputed property, they could not be sued as the land was registered in the name of their husband, Mbucho Waweru.In a judgement which was compacted in just five sentences, Shields concluded that  Mbucho had been dead for 20 years before the suit was filed and “the trust does not survive against the widows.”John Mbucho Muraga was appointed the administrator of Muthoni and Njoki who died sometimes after their suit was dismissed. He inherited the dispute, he belatedly appealed the judgement which had been delivered by Shields 11 years later.

He claimed that since his mother and step mother were dead and were at one time senile and incapable of pushing on, he wanted to be granted leave to appeal, noting that he and his siblings had lived on the suit property all their lives and knew no other home.

High Court Judge Kalpana Rawal was not impressed by his arguments during the application and concluded: “After the judgement there have been proceedings for taxation execution and and mention there upon up to 1998. The applicant has not given one good reason to set aside the judgment and thus regrettably I have to dismiss  the application dated September 6, 2010.”

It is against this background that Appellate judges Milton Stephen Asike Makhandia, William Ouko and AK Murgor quashed the appeal on July 14,2017, noting: ”We conclude that the appellant was simply guilty of laches (unreasonable delay) and acquiescence. We find no substance in the appeal which we accordingly dismiss.”Interestingly, just like in the original case, the appellate court noted it had been filed 20 years after the death of Mbucho Waweru, the appeal by Muraga was filed 21 years after his mother’s case was dismissed by Shields.

Two months after the Court of Appeal pronounced its verdict, Mucho Waweru’s family got a rude shock when on September 12, 2017, they received two summons before Mutati location chief.“The purpose of the summon is land issues raised by one John Mbucho Muraga.

NB. Come with land title, Kiganjo Nembu/78 and Kiganjo Nembu 184,” reads the summons issued by Videlis Wanja, Mutati Location chief. The summons also bore the name of Mutati sub-location chief, Njoroge Giboni and the stamp of Kiamwangi Assistant County Commissioner,  Awour Onyango. This time round, the case had been passed over from Wanjiku Mbucho who had been replaced by her son, Muigano Mbucho.

At the same time, Muigano Mbucho filed another suit against John Mbucho Muraga, and eight other cousins.When we called Videlis Wanja Kagari, the chief who had issued the summons, the administrator said she was not aware of it, asserting that she has never demanded the title deed from the family.

At the same time Gatundu Assistant commissioner, Fred Goko, described as strange demands for Margaret Wambui and her deceased husband Muigano to surrender the title deed to the chief for a piece of land which the matter had been concluded by the Court of Appeal.

House calls for probe of PS and officials over Sh7b deal

Goldenscape victims give DCI 30 days or sue over Sh18.9b investment