AfricaPress-Kenya: Koroto Primary School in Baringo County went to court appealing for the removal of a grave in the school premises.

The grave belongs to one Paul Kipchabas, whose family alleges to have donated the land to the school only for them to demand the exhumation of their deceased son’s grave.

Upon finding the grave, the school’s headteacher said that the Board of Management requested the widow and her other son to remove the remains of their loved ones from the precincts of the school as directed by the public health officers, “but they refused to do so”. 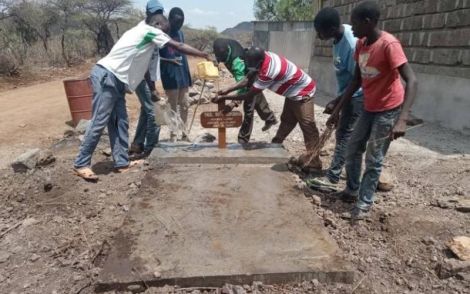 The grave where Paul Kipchabas was laid to rest at Koroto Primary School compound, Baringo County on March 25, 2021.

The order made by the public health officers was that the body should be buried at a suitable alternative location citing health risks and psychological or mental trauma to the learners.

The headteacher said he was surprised to find a fresh grave in the school compound in front of a classroom on March 26th.

The family countered the accusation by saying the deceased had been to court and filed a complaint against the institution. He (the deceased) said his grandfather had donated 10 acres in 1970s to the school but the school extended it to 32 acres.

A suit was presented to the boards of management of both Koroto primary and secondary schools, Baringo County Government and Baringo County land adjudication officer were respondents.

A report by the Standard stated that Kipchabas family had accused the school of invasion and maliciously turning the land into a public utility.

The family’s lawyer, Solomon Chepkilot, argued that the school invaded the family’s property. He continued to state that there was no approval to construct the secondary school.

“The deceased had fenced off his land but the school destroyed the fence. The family did not have another place to bury their loved ones,” claimed Chepkilot.

The department of health through public health officials issued a seven-day notice to the school to remove the body failure to which legal action will be taken.