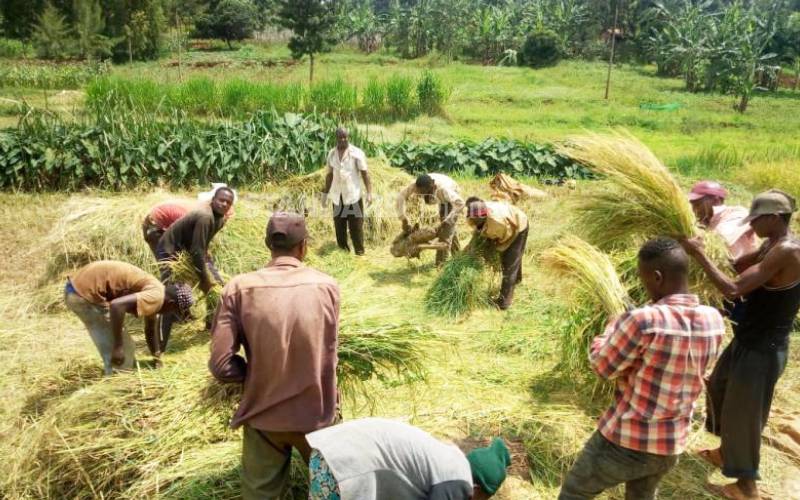 Rice production in Kenya could increase if farmers adopt an improved variety after trials at Mwea, Kirinyaga County, established it produces high yields compared to the traditional pishori.

More than 100 farmers from Kabatiro who experimented the hybrid variety – AT054 – developed by Afritec Seeds Ltd, recorded a bumper harvest last December.The hybrid rice was supplied to the farmers through a collaboration between African Agricultural Technology Foundation (ATTF), Kenya Agricultural Research and Livestock Organisation (Kalro) and Integrated Community Organisation on Sustainable Empowerment and Education for Development (Icoseed).

Icoseed Managing Director Patrick Gitari said the hybrid rice yielded up to two and half times compared to the traditional pishori.Mr Gitari said whereas the famous pishori yields an average of 20 bags per acre, the hybrid recorded about twice that number with the best farmer attaining 60 bags.“The hybrid matured two weeks earlier than the traditional pishori. This means in case of water deficiency it will not be very much affected. The aromatic nature of the traditional pishori has been its marketing point. The hybrid variety has the same aroma hence marketable,” he said.He said in collaboration with partners, they are working to scale up adoption of the variety and reach 10,000 farmers in the next two years.

Peterson Maina who planted the hybrid on a pilot basis, said he harvested more than doubled in the same area where he previously planted other rice varieties.Wilfred Wanjira, another farmer, said the new variety required less water and matured faster just as researchers said.Stephen Thiga, a rice production expert, said in addition, the new rice variety is disease and pest-resistant.According to the Food and Agriculture Organisation (FAO), Kenya produces 150 metric tonnes of rice annually whereas consumption is around 600 metric tonnes.To bridge the deficit of rice, which is the third staple crop after maize and wheat, Kenya resorts to importation of about 450,000 tonnes of rice mainly from Pakistan.Gitari called for greater adoption of improved varieties and technologies to increase rice production and reduce its importation, which would save the State cash,improve lives of farmers and create jobs.

Challenges of farmers on the spotlight at COP27

Fears for farmers as crops fail due to drought