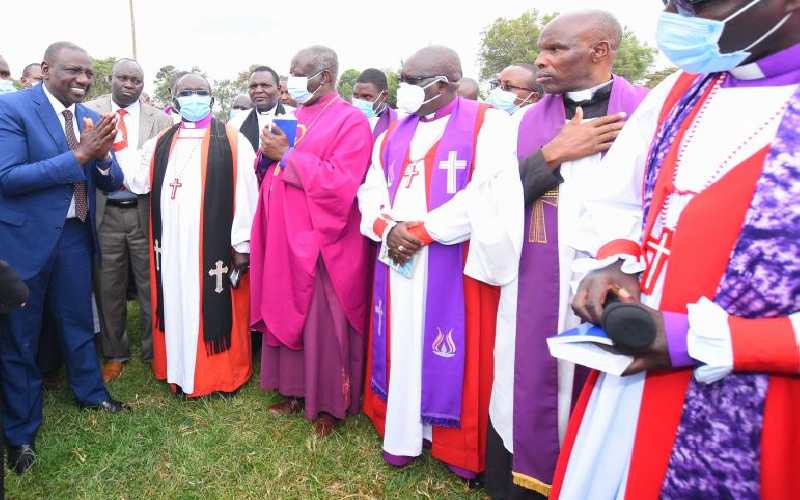 AfricaPress-Kenya: Deputy President William Ruto has fired back at his critics, including his boss President Uhuru Kenyatta, over calls to resign for criticising the government from within.

Speaking in Uasin Gishu County on Monday February 22 during the burial of William Kurgat – a prominent Anglican Church elder, the DP used ‘the cook in the kitchen’ analogy and vowed not to ship out of the kitchen, to mean he would stay in government.

“Politics is like being in a kitchen. There is a choking smoke, fiery fire amidst profuse sweat, but the cook must ensure the food is sumptuous and must endure all that. There is a lot of noise flying across, but I will stay put to ensure what we began with President Uhuru is cooked,” said the DP.

“I am calling upon all Kenyans not to worry about the ongoing noise, but be assured that what we started with President Kenyatta in 2013 will remain and will be fulfilled.”

Ruto traversed Baringo, Elgeyo Marakwet, Kakamega and Uasin Gishu counties at the weekend to drum up support for his 2022 presidential bid. He lamented that there were plans by some government operatives to push him and his allies out of government.

“We came together with President Kenyatta to change the political landscape of this country and form a united country. It is my resolute belief that never again will the country plunge into divisions motivated by tribalism,” he said.

The intrigues surrounding the purported planned ouster have deepened following reports of a move to starve the DP’s office of cash.

On Saturday, Ruto said there was a plot to kick him out of government, barely a fortnight after President Kenyatta dared him to resign.

“For those who want to drive the rest of us into a corner in a government that we created together; we want to tell them we are gentlemen, so we are not going to respond to them,” said the DP.

On Sunday his allies said the scheme was aimed at frustrating him by cutting down his budget to push him into resigning.

Kenyatta’s allies have said it is no longer tenable for Ruto to continue serving as the country’s second in command when he is at the same time “sabotaging” its development agenda.

The DP’s allies have also claimed plans to withdraw his security during his public engagements to push him into scaling down the political rallies.

“It is not really about impeaching him, but frustrating him so that he can resign. You have seen them convene a Cabinet meeting but fail to invite him. What does that tell you?” posed Kimilili MP Didmus Barasa.

He added: “But they should know that the DP will not resign. He will serve until the term of this government expires. We are also aware that they have started cutting down the allocation to his office.”

Nandi Senator Samson Cherargei and Soy MP Caleb Kositany said the system had resorted to intimidation and blackmail after realising it does not have numbers in Parliament to impeach the DP. Yesterday, however, Ruto regretted that the Big Four agenda had taken a back seat in favour of the Building Bridges Initiative (BBI), adding that he was hopeful for a united country.

“The Big Four agenda will be fully implemented once the matter of BBI is concluded. At the moment, more than 16 million Kenyans neither have jobs nor business, a scenario the Big Four agenda would have remedied. This, in turn, has denied the government billions of shillings’ income in form of taxes,” he said.