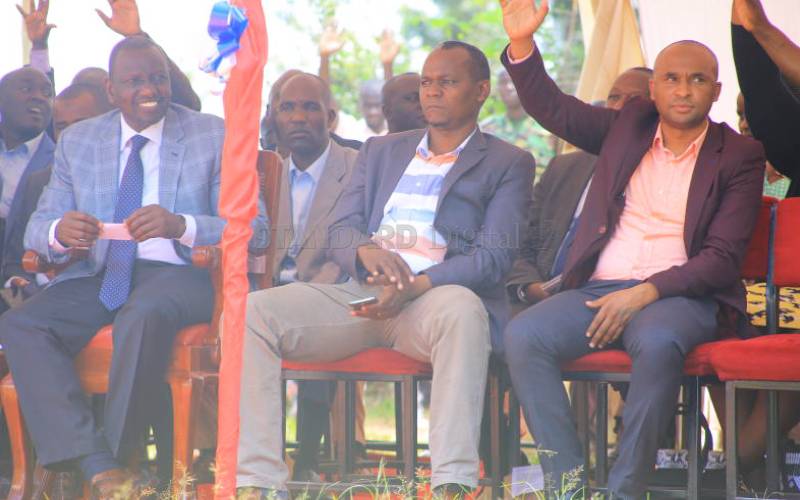 Deputy President William Ruto says he will continue to perform his duties as the principal deputy to President Uhuru Kenyatta despite criticism from his rivals. Ruto said he has the responsibility to perform his Constitutional duties without any intimidation from any quarters.

Speaking at Itierio grounds, Kisii County during the consecration of the Second Diocesan Bishop Rev Joseph Omwoyo Ombasa yesterday, Ruto said he will continue with projects that benefit the community.

“Kenya doesn’t need any kingship, bravado and conman-ship. Leaders must be ready to listen to both the meekly and weak. We must be ready to build genuine bridges and avoid the ongoing political infighting and chest-thumping.

“Dr Ruto also asked leaders to be honest in their conversations on the BBI adding that leaders should respect and accommodate divergent views in the BBI process if it is to succeed. “We are building bridges of friendship and development; let us stop any underlying hypocrisies and unite the country,” he said.

“Kenya doesn’t need any kingship, bravado and conmanship. Leaders must be ready to listen to both the meek and weak. We must be ready to build genuine bridges and avoid the ongoing political infighting and chest thumping,” he said.

The DP added that said it was time politicians stopped thinking within the confines of their political parties and accepted that “we belong to one country”.

Ruto said the Jubilee administration was keen to actualise its agenda in youth empowerment, agriculture, education, universal healthcare and infrastructure development.“Those in provincial administration should be able to collect data of those children yet to join Form One.

We must achieve the 100 percent transition in our education sector. Let’s have the reasons they are yet to get the Form One admission,” he saidKisii Deputy Governor Joash Maangi, South Mugirango MP Slyvanous Osoro and his Bomachoge Chache counterpart Alfa Miruka said they would continue to support Ruto towards his 2022 presidential bid.

“I have given my life to God because of the constant attacks from perceived political enemies. Despite all these challenges, I will continue to speak out on issues of corruption that have taken toll on our country and are almost tearing apart our great nation,” said Mr Maangi.He added that the fight against corruption in his country is a priority.

“I will support the president in this war without any fear. We must speak out and call out those misusing public money.”Mr Osoro called for genuine inclusivity in the ongoing BBI campaigns, saying there are plans to undermine leaders perceived to be supporting the deputy president.