In a statement, Kalonzo indicated that he had reached out to Kulei to issue a personal apology.

“I spoke to my good friend Joshua Kulei and personally apologized for the mix-up on my twitter handle. May Abraham Kiptanui soul continue resting in eternal peace,” Kalonzo stated. 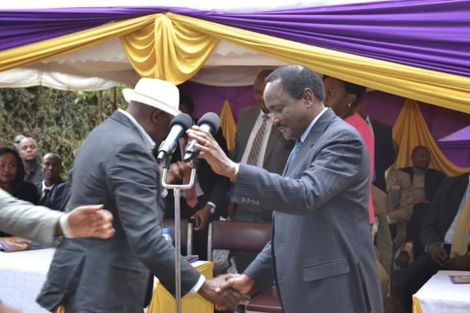 Kalonzo Musyoka interacts with Muthama Nduya at a past event

Previously, the Wiper leader had mourned Kiptanui, indicating that he had worked closely with him. Ironically, he had posted a wrong photo that had caused him to face a backlash with netizens online.

“I have known and worked closely with Abraham during his tour of duty and deeply admired his commitment to duty as a loyal public servant,” Kalonzo had earlier twitted.

Kiptanui passed on in the wee hours of Easter Sunday morning, April 4. His family indicated that he died peacefully in the presence of his family at the Nairobi hospital following a long illness.

KTN News also had to apologise after they erroneously used Kulei’s photo.

“While breaking the news of the death of former State House Comptroller Abraham Kiptanui on KTN News, we erroneously used the photo of Joshua Kulei, a former Moi aide. We apologise to Mr. Kulei and his family for the mix-up,” he stated.

Kulei could be considered as one of the richest individuals in the country as is one of the shareholders at Standard Media Group. He also has vast interests in real estate, manufacturing, farming, and banking.