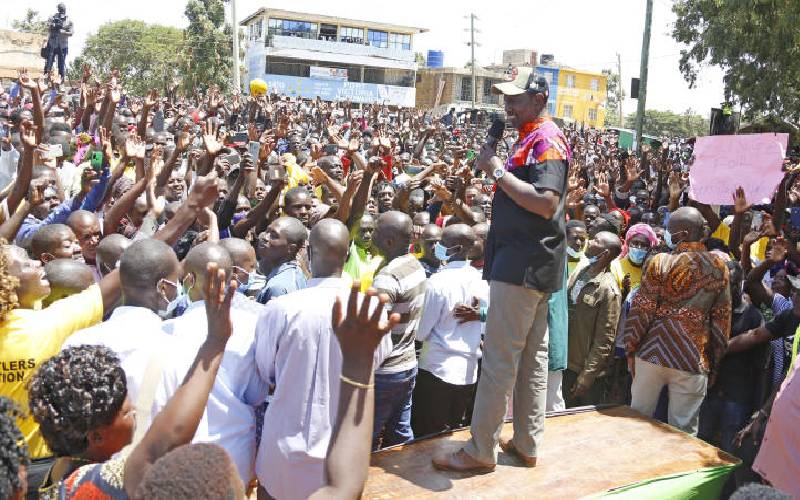 AfricaPress-Kenya: Allies of Deputy President William Ruto yesterday dismissed the plot to oust him as Jubilee Party deputy leader an exercise in futility.

The MPs said President Uhuru Kenyatta has no powers to fire Dr Ruto as Jubilee Party deputy leader and it was only the National Delegates Convention (NDC) that can ratify his removal.

The Tangatanga leaders were responding to the announcement by Jubilee Secretary General Raphael Tuju that National Management Committee’s (NMC) had resolved to remove Ruto as the party’s deputy leader and forwarded the decision to the National Executive Council (NEC) chaired by the President.

“The NMC discussed the matter and resolved to remove the DP as per the party constitution. The matter is active, we have the recommendations of NMC and now only waiting for the party leader to convene a NEC meeting to deliberate on the matter,” said Mr Tuju.

But Mr Cherargei said NMC and NEC have no powers to remove the DP from the position and dared Uhuru’s allies to convene NDC.

“NMC has no powers to remove the DP as the deputy party leader. That decision can only be done by the NDC. Even NEC has no such power,” he said.

“The problem we have is that Jubilee stopped following the law. Any changes they have done, including in the two Houses of Parliament have been done in total violation of the law and sheer impunity,” he added.

The Nandi Senator said members of NMC are in office illegally.

According to the Jubilee constitution, NDC is composed of all members of the National Governing Council, county whips, county majority and minority leaders, county delegates and seven representatives from each of the 290 constituencies.

“The National Delegates Convention shall be the supreme organ of the Party and shall determine the party’s policies,” states the party constitution.

NDC has powers to elect from among the eligible members of the party, the national officials, nominate the Jubilee candidate for election as President and Deputy President among other roles.

The MP said that the removal of Ruto from the party position has no implication to his stay as the country’s Second in Command.

“What they should do is for them to bring the impeachment motion against the DP in Parliament so that we can deal with this political witch hunt once and for all,” said Kositany.

“What they are trying to do is not tenable. NMC has no powers. If they really want to own the party let them call for elections so that members of the party can make a decision on who becomes the officials,” he added.

Dr Khalwale said that the political struggle in the ruling party has no bearing on Ruto’s stay as the deputy president.

“I don’t think the constitution of a political party supersedes the Constitution of Kenya. A Deputy President cannot be removed because of challenges that a party has in terms of discipline,” he said.

Uhuru’s allies in Jubilee have accused Ruto of sabotage and faulted his association with the United Democratic Alliance (UDA), an affiliate of Jubilee.

The Jubilee constitution states that membership can be terminated if a member is perceived to “accepts an office or promotes the activities of any other political party” or contravenes the party’s constitution or code of conduct.

But Tuju said Uhuru who is the party leader could either call for the meeting or delegate the matter as was the case with the removal of Murang’a Senator Irungu Kang’ata as the Majority Whip when he chaired the Senate Parliamentary Group over breach of confidentiality.

The DP, whose relationship with the president has deteriorated in recent months over his early 2022 campaigns and ambivalence towards the Building Bridges Initiative (BBI), was the last man standing from his Tangatanga wing in the ruling party.

This comes after Kositany was shown the door two weeks ago following a warning by Jubilee Vice Chairman David Murathe.

Murathe and Tuju have not minced their words since the purge on Ruto allies in Parliament and Cabinet began. They declared that they will not spare anyone out to derail the president’s legacy agenda and Handshake with ODM leader Raila Odinga.

The dilemma is that NEC has not been convened since 2017, however within this period the Majority Leaders in both the National Assembly and Senate and their Majority Whips have been expelled for being disloyal and supporting the DP.

Some of the casualties in the UhuRuto war include former Cabinet Secretaries Rashid Echesa and Mwangi Kiunjuri. In Parliament, the ‘bloodbath’ swept away all Ruto allies from the House leadership and departmental committees.