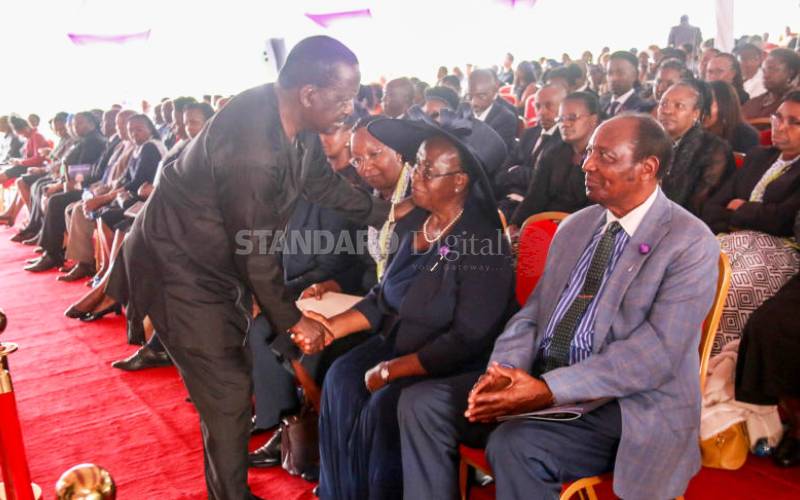 Speaking in Tigoni, Kiambu County, where he attended the burial of veteran politician Nginyo Kariuki, Raila said BBI was unstoppable and would change the course of the country.“BBI is not for creating positions but to unify and bring diversity in the country, that a Luo can live and invest in Kikuyuland and vice versa. When an election is done, it should end the same day and everybody goes back to their businesses,” he said.Raila took yet another swipe at some leaders over their generous contributions to churches.

He singled out Nginyo as a self-made tycoon who built his empire from scratch without involving himself in corruption, and accused senior government officials of dishing huge amounts of money earned from graft.

“We must fight this cancer of corruption by deeds not words. Investment should be done here on earth, but some leaders have been saying that they are investing in heaven through harambee donations in church,” he said.

Although he did not mention any names, Raila’s remarks appeared to target Deputy President William Ruto who has never shied away from making donations to churches and has defended his reasons for doing so.“Kenya should be playing in the super league… BBI is the way to move fast forward, no more distractions,” he said.

Kiambu Woman Representative Gathoni Wamuchomba caused a stir when she revealed that Nginyo had confided in her about BBI, noting it was the right way to go if Baringo Senator Gideon Moi was among those supporting the initiative.

Gideon said Nginyo’s family stood with his family during the burial of retired President Daniel arap Moi last month.The Baringo senator said Nginyo was a self-made man and golfer who detested corruption.He said plans to revive Kanu were still on.“I can assure you that Kanu will come out in a strong way in the coming days,” Gideon said.

Raila said that BBI is unstoppable as it is meant to unite all Kenyans and fight corruption.Raila said President Uhuru Kenyatta, who was expected to attend the funeral service yesterday, was held up in a meeting at State House over the coronavirus crisis.

Arrangements were in place for the president but his seat was later taken away by his aides.Attorney General Kihara Kariuki who read the president’s speech challenged Kenyans to elect leaders like the late Nginyo whose vision was to unite Kenyans.“Imagine if we elect three leaders like the late Nginyo in Kiambu or Mt Kenya region, imagine how much they can change the country,” he said.

Nginyo who was a multiparty crusader and astute businessman died last Monday at the Aga Khan Hospital in Nairobi.The successful businessman and golfer is associated with Nginyo Towers in Nairobi and Lenana Mount Hotel.Nginyo was also a founder member of The National Alliance Party.