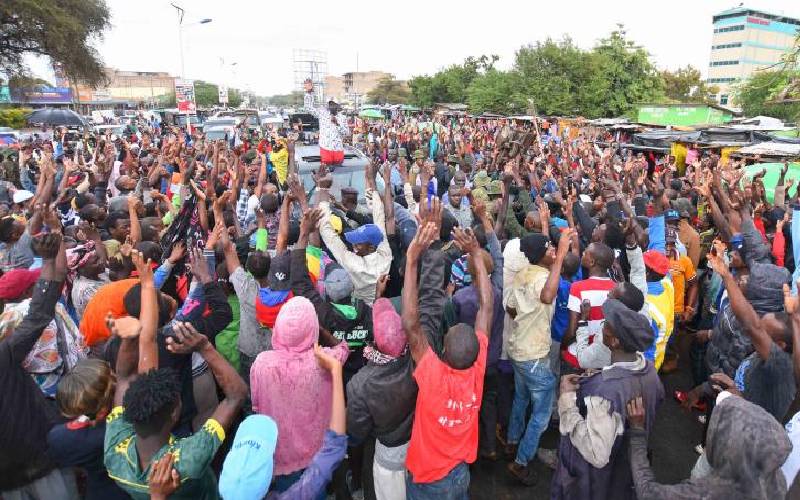 AfricaPress-Kenya: Youth chanting pro-BBI slogans heckled Deputy President William Ruto when he made a stopover in Isiolo town after completing his church fundraiser event at Ngaremara market on Saturday. The event was snubbed by local leaders.

At the church fundraiser at Kiwanja in Ngaremara Ward, 6km from Isiolo Town, only Isiolo Woman Representative Rehema Jaldesa was the elected leader from the region who accompanied Dr Ruto.

Ngaremara Ward Representative Ekuam Teru and the county’s BBI coordinator Joseph Samal, who is also the immediate former Isiolo North MP, also attended the event, but clarified that they were there “only as area residents and leaders” to give their contribution.

Ms Jaldesa, the lone anti-BBI crusader and ardent supporter of the DP, claimed her colleagues “for one reason or another had been intimidated to support BBI by the State”.

With the local leadership directly opposed to the DP and actively promoting the BBI reforms, Ruto’s visit looked like a poisoned chalice from the start, and the tension was palpable from early in the day.

The venue where the DP had planned to address Isiolo Town residents changed at the eleventh hour.

It was not clear why the venue was changed, but the pro-BBI youth, some on boda boda and armed with vuvuzelas and placards, had started trooping in the town from as early as 11am.

About an hour before the DP arrived in the town centre, at around 3.30pm, the pro-BBI supporters took their positions on the street where his address was to take place.

There was a heavy police presence in the town throughout the day. The youth had also attempted to stop a truck parked at the venue where Ruto was meant to address the residents to stop playing pro ‘Hustler’ songs.

Police intervened, and pushed them away from the area. They retreated, but positioned themselves in strategic locations near the venue and the highway.

When the DP’s convoy that included cars carrying 15 legislators went past the venue where he was expected to speak and stopped near a mosque in the town, the youth followed and chanted pro-BBI slogans.

While Ruto addressed the crowd, pro-BBI supporters interjected by saying they wanted BBI. “I know Isiolo supports the ‘hustler’ nation, but I can see there are a few supporters of the other side,” responded Ruto. Jaldesa said she was aware that Isiolo County Assembly was planning to pass the Constitutional Amendment Bill, adding that she was confident the residents would still reject the document at the referendum.

Ruto touched on the various projects the government was undertaking in Isiolo, saying most of them were near completion. “The road from the junction of the Kenya Wildlife Service National Park in Igembe North, connecting to Kinna and Garba-Tula will be completed soon, while the construction of a B9 road from Isiolo town to Modogashe will start soon,” he said.

Mr Samal said the function at Ngaremara was completed peacefully, as his team had requested residents to give the DP maximum respect.

Isiolo County parties’ forum on BBI, which brings together ODM, Wiper, Kanu, and Narc among others, distanced itself from those who heckled the DP.

“While Isiolo is a BBI zone, contrary to some propaganda, we are peace-loving and not part of or organisers of those who heckled the DP,” said Ismail Galma, an ODM official. BBI promotes peace, and we therefore shun such incidents that can lead to violence,” added Mr Galma.

Notably, among the most prominent proposals in the BBI, are changes in the structure of the Executive and the Legislature, with the creation of a premier and two deputies from the majority party in Parliament.It also proposes to revive the pre-2010 direct link between the Cabinet and the Legislature by allowing for ministers (and their deputies) to be appointed from among legislators.