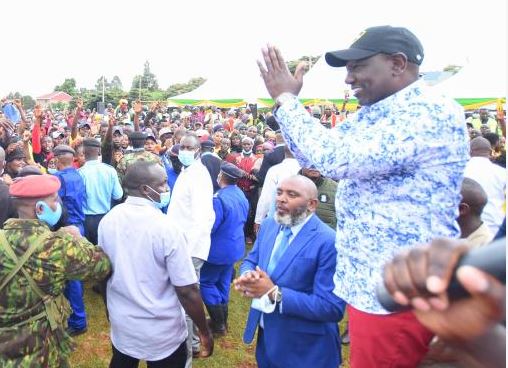 AfricaPress-Kenya: Deputy President William Ruto yesterday said he was best suited to take over from President Uhuru Kenyatta so that he can continue with his legacy.

Dr Ruto held a series of meeting in Uhuru’s backyard of Kiambu on the day he was told to quit government.

The DP continued to outline the Jubilee administration’s achievement, rallying Uhuru’s Mt Kenya region to back him when the president’s term ends next year.

The DP faulted the investment by government in big companies, saying it has resulted in enriching a few at the expense of millions of jobless Kenyans.

He was defending his Hustler nation which has come under sharp criticism for sabotaging the President’s legacy agenda, including the Building Bridges Initiative (BBI).

“What I have said it’s because I understand that hustler is a conversation for the struggling Kenyans to build the economy. I was a chicken seller but because God is faithful, I am the DP today. These small business can metamorphose to large business enterprises,” said the DP

He said the new economic path will usher in the empowerment of ordinary Kenyans struggling to make ends meet.

Addressing wananchi at Gachie, Kihara and Wangige markets after leading various empowerment programmes in Kiambaa and Kabete constituencies, the DP said savings and credit co-operatives play an integral role in the creation of wealth and poverty alleviation in the country.

“We will continue supporting and encouraging youth and women to combine efforts so as to inspire a saving culture and boost their return on investment,” he said, as he officially opened the Karuri Commuter Services Sacco Energy office block in Banana, Kiambaa.

He took a swipe at ODM leader Raila Odinga whom he accused of disrespecting the Hustler nation.

Speaking when he led the empowerment of 30 boda boda saccos in Kiambaa at the Kawaida playgrounds, the DP also stressed the need to have cash in circulation, especially with a population where majority are jobless.

He weighed in on the Dynasty vs Hustler narrative, which he said was not setting up the rich against the poor.

“I will state here categorically that the Hustlers (jobless) need assistance to be empowered so that those already established cannot exploit them.

So long as one is able to have cash in the pocket and food, it’s okay,” said the DP.

He said next year, just like The National Government Constituency Development Fund, the Government will also set aside Sh100 million for every constituency to empower small business people.

“But when I say so, someone will tell you the DP is just yapping. I am the DP now and am not mad, stupid and drank. I know what I am saying,” said the DP, adding that it’s achievable.

He said they are determined to channel more resources to the millions of ordinary Kenyans at the base of the social pyramid so as to generate more wealth through enterprises.

“This new economic model anchored on Kazi Ni Kazi philosophy will help us fight poverty and drive the nation forward,” he said.