AfricaPress-Kenya: The government’s latest Ksh255 billion loan from the International Monetary Fund (IMF) has elicited sharp reactions from Kenyans with a majority of them questioning the lender’s motives.

A section of Kenyans flooded the Fund’s social media pages to protest the approval of the loan while the hashtag #stoplendingKenya was trending on Monday with many claiming that the funds are only meant to benefit specific people who have direct access to the government.

The hashtag which began on the evening of Sunday 4 has attracted many Kenyans including key public figures in the country.

“Kenya can generate enough money to keep it going. We live hand to mouth with or without your loans as it never makes any difference…We pay every single coin you lend them. It’s enough,” commented one 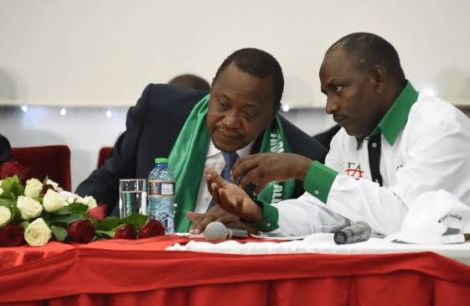 The underlying concern for Kenyans is that the president himself admitted that Kenya loses at least Ksh 2 billion every day to corruption and theft.

Based on this shocking admission by the president, a number of Kenyans wondered how long it would take the IMF loan to be misappropriated.

“The government loses Ksh 2 billion daily according to Uhuru, and still the IMF approves their loans. The burden then comes to innocent wananchi, who had no share,” said one Dogweno.

While others appreciated the financial help from IMF, others questioned whether the lender considered how funds were being managed in Kenya.

“I am a kenyan tax payer, I know how corrupt the current government is. #stoploaningkenya. We are over taxed, the president admitted publicly that we’re losing Ksh 2 billion daily to corruption, and here you are still proudly giving us more loans. STOP IT. STOP LOANING KENYA!” Paul shared.

“Kenya has a vaccine shortage even after borrowing USD 2.34 Billion. Do these organisations check our debt record before lending us more loans?” Floki questioned.

“Stop giving loans to Kenya,you are enriching families at our expense,what economic reforms? Do they show you even what they plan to do with the money? You are part of the collusion to steal from Kenyans,” Myron said.

On Saturday, April 3, the IMF approved the $2.34 billion (Ksh250 billion) for economic recovery a well as reducing Kenya’s debt. The first batch of the loan which is spread across 38 months is to be disbursed in less than a week from when it was approved.

According to IMF, Kenya was already in a good position to warrant another loan which comes with the surging economic effects of the Covid-19 pandemic.

“The Kenyan authorities have demonstrated a strong commitment to fiscal reforms during this unprecedented global shock, and Kenya’s medium-term prospects remain positive,” the IMF Executive statement read in part.