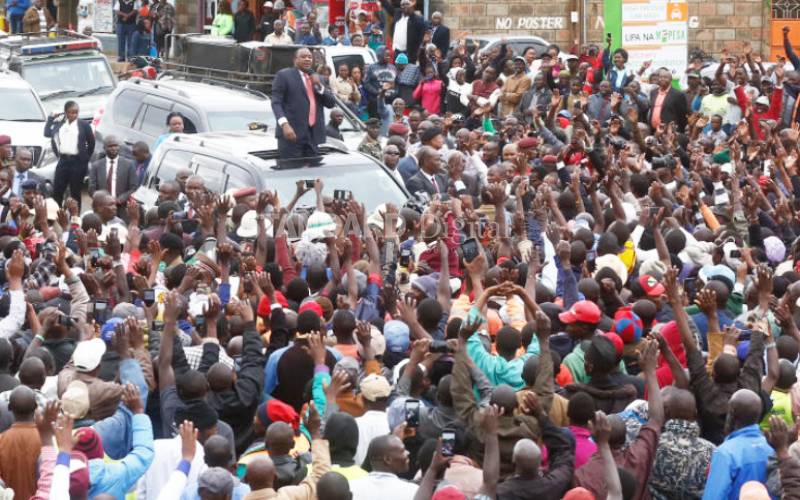 Stop the insults and leave me alone.That was President Uhuru Kenyatta’s blunt message to Bahati MP Kimani Ngunjiri when he toured the constituency.The president did not hold back when his convoy stopped at Maili Sita and he was handed the microphone by Nakuru Governor Lee Kinyanjui.”There is one man who has made it a habit to insult me every day.

I decided to keep quiet and observe him until the day I would come to Bahati. I am here to find out whether it is you (residents) who send him to hurl insults at me,” said Uhuru.

The crowd roared its disapproval and Mr Ngunjiri, who was in the third car in the convoy, sat pensively and listened as the president tore into him and questioned his leadership qualities.”No one is happy when we have bloodshed after every five years. We won’t buy their intimidation. We have to ensure people live in peace.

If he (Ngunjiri) is not able to deliver, he can step aside and I will take his place and deliver what you expected from him,” said Uhuru.Mr Kinyanjui had fired the first salvo when he introduced the president, telling the crowd that it had become increasingly difficult to approach Uhuru and seek his support to develop Bahati because of their MP’s tendency to insult the president.

“The behaviour of your MP has made it difficult for me to tell the Head of State the challenges you are facing as a constituency. I now want you tell the president whether you are the ones who told your MP to insult him,” the governor said.Uhuru accused the lawmaker of ignoring his duties to his constituents.

“Instead of working he is always in the press insulting me. Ask him what wrong I have done to him. Tell him to leave me alone.”The president spoke of the importance of leaving behind a legacy of a united nation amid divisions in the political class.”A country is not built by name calling. I am interested in bringing all communities together.

We want whenever we have an election, everyone goes home with peace of mind. They won’t stop me. The greatest gift I will leave to this country is peace. Not intimidation after every five years,” Uhuru said.He continued: “We want to see milk, coffee and tea prices back to where they were.”When The Standard later spoke with Ngunjiri, he said he should have been given a chance to defend himself.

He said it was wrong for Uhuru to target him “instead of dealing with other important issues affecting voters in his constituency.””I heard everything he said about me and my concern is whether it was right for the president to come all the way from Nairobi to attack me,” he said in a telephone interview.

The MP said he had followed the presidential convoy and listened as Uhuru addressed crowds along the Nakuru-Nyahururu road, which passes through his constituency.”I was behind him all along and I think that the president stooped too low to come and attack me. The president is of the league of fellow presidents like Museveni and other international leaders and not me. I am not scared. I still have my support on the ground,” he said.

Ngunjiri, a staunch supporter of Deputy President William Ruto and his stake in the 2022 presidential race, has been at loggerheads with Uhuru over his handshake with ODM leader Raila Odinga.

He was recently summoned to the Rift Valley Directorate of Criminal Investigations offices and ordered to surrender his firearms after the gun licence he got in 1993 was revoked.

He was also stripped off his bodyguards and grilled over remarks he made at a press conference that Ruto was kicked out of a government house in Mombasa early this year.Uhuru, who was touring the county for the second time in a fortnight, told off Jubilee leaders who were opposed to his unity pact with Raila.

He demanded party members’ full support of the Building Bridges Initiative (BBI), saying that was the only sure way for him to leave behind a united country. “We don’t want a situation where Kenyans are always in fear over politics. We must address that. We have started a journey, na hiyo safari hakuna mtu atanizuia.

Hiyo lazima nitatimiza (no one will stop me on that journey. I must deliver).”The president addressed eight meetings in less than six hours as residents packed the busy road and braved a steady downpour to listen to the unity message.

Mr Tolgos is the Rift Valley BBI coordinator.Speaking earlier in Rongai where he launched a Sh6 billion cement factory, Uhuru declared that his agenda was unstoppable.”If we follow some politics that is being witnessed, we won’t realise development. It is only through development projects that we shall create jobs for Kenyans and improve our economy,” said Uhuru.

Addressing residents in Subukia, the president warned politicians not to engage in premature 2022 campaigns.”We have many issues to be addressed for the benefit of all Kenyans. Let us work instead of politicking from morning to evening.

“We were not elected to engage in shouting matches. We should focus on development goals which will pave way for improving our economy,” he said.The president reiterated that his greatest regret was seeing citizens fighting every election year over politics.”We want people from all communities to stay united and feel safe regardless of which part of the country they are in,” he said.

Uhuru’s one-day tour of Nakuru came just hours after a group of 170 Jubilee MPs – who were joined by rebel legislators from ODM and Ford Kenya – held a meeting in Naivasha where they announced that they would hold parallel BBI rallies across the country.The lawmakers’ intention is to counter ongoing meetings convened by Raila.