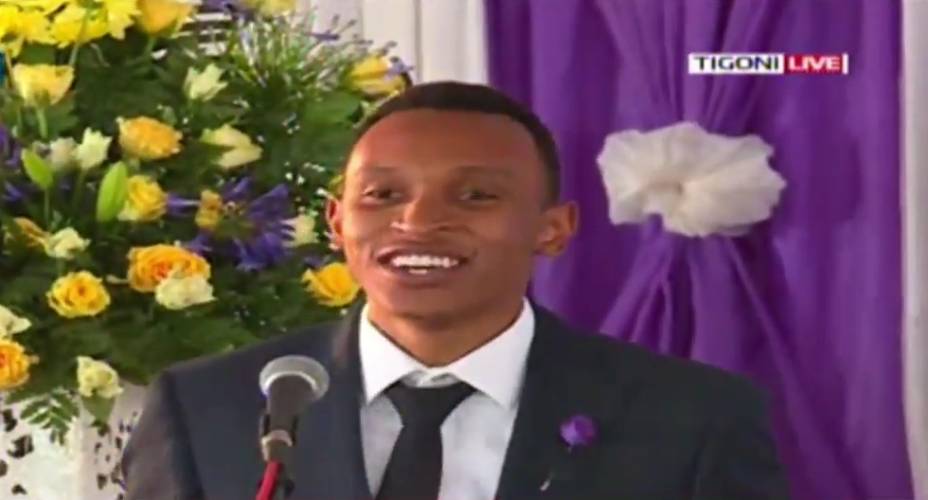 Kelvin Wambugu Kibe eulogised his grandfather Nginyo Kariuki as his political mentor and a man he could sit with and talk about politics of the country.

Wambugu excited the mourners when he shared the light moments he shared with his grandfather.  He recalled how he used to share political stories with the late businessman, always asking him about the new developments. One incident was about the political antics of ODM leader Raila Odinga.

“Huyu mtu wako (This your man) is a great politician. Can you teach me how to be like him. Mimi ndiye mwanasiasa huku (I am the politician here). I used to campaign with him everywhere,” he said.“I used to have great political talks with my grandfather and he promised to teach me the right way to do politics,” he added.He declared that he would run for a parliamentary seat and was already seeking for guidance for his political path.

Kibe pledged to keep the political history of the family going, asking for full support from Mr Odinga who was also in attendance at the burial ceremony of the late businessman and politician Nginyo Kariuki. “I feel sad my grandfather will not be there when I become a member of parliament. I promised him that one day I will join politics like him. Honourable Raila now you are my political grandfather, help and guide me moving forward,” he said.

Nginyo Kariuki is a renowned businessman and a politician who participated in the formation of the TNA party which propelled President Uhuru Kenyatta to power in 2013. He died on Monday at the Aga Khan Hospital aged 82