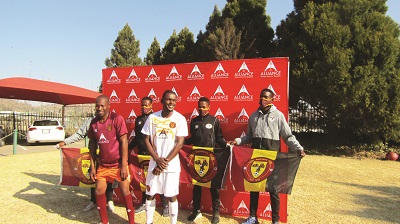 Sport branding is one of the essential elements to distinguish the team from its opponents. Lioli has thus introduced the new home and away kit together with the logo, at Alliance insurance company premises last week.

Lioli President Lebohang Thotanyane, expressed that they are changing the logo as to manage their brand, he said the previous logo was misused by other individuals without the team’s concern. “Logo is one of the important factors that need to be protected as it differentiates the team from other premier league and international teams. Our logo had never been changed in the past 15 years so we decided to introduce the new one that is more appealing. We believe it will build a strong relationship with our fans. Also, this new logo shows our commitment to professionalism. This well designed logo will again offer the point of recognition and help the team to stand out from the crowd,” said Thotanyane.

The President added that the new logo will allow the team to gain exposure, especially in these trying times when Covid-19 seems to have restricted supporters to watch matches live. “The current situation has urged multiple platforms and devices on which sports are viewed to increasingly adopt digitalization, so having this new designed logo will allow our fans to access sport related issues such as score updates easily through the internet,” he said.

Thotanyane also directed a note of thanks to Alliance Insurance Company for its provision of new kit. “Thanks to Alliance Insurance Company for making our dream come true because it is the one that sponsored Lioli with the new home and away kit that will be used in the 2021/2022 season,” he informed. Reflecting on their relationship with the company, Thotanyane said Lioli has a great partnership with Alliance Insurance Company, which helps the team financially by putting aside the technical budget that amounts to more than M100 000 annually and also offers the monthly allowance of up to or more than M1.2 million if calculated yearly. He further mentioned that the insurance company also sponsored the team with Personal Protective Equipment (PPE). “Lioli is pleased to have such a partner like Alliance Insurance Company and we wish to continue working together, we are also working on very big projects that are still in progress as the way of maintaining the friendship that we had,” he revealed.

Alliance Public Relations and Communications Manager, Limakatso Mokobocho, expressed her excitement over Lioli’s new logo and new home and away kit, hence “rebranding”. “The new kit and logo of Lioli look good, we find it worthy to sponsor the team with the new kit as Lioli is one of the most organised teams that we work more effective with; Lioli management always make their reports on time and also communicate with the company more effectively if there is an issue that needs to be communicated. The company has the special long time bond with Lioli, which I believe will be reinforced following the determination and the commitment that the team has shown towards us,” stated Mokobocho.