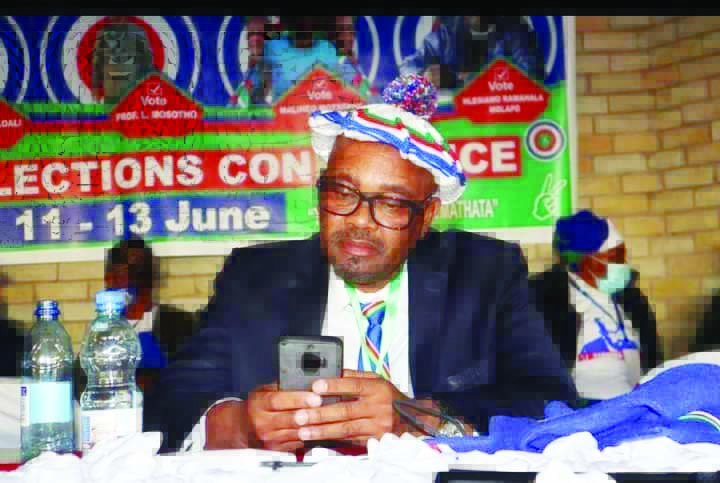 Machesetsa Mofomobe is the new leader of the Basotho National Party (BNP). The party went into an elective conference last weekend to choose a successor to outgoing leader, Chief Thesele ’Maseribane, whose second term in office expired in March.

The conference was held at the Thot’a-moli Conference Centre in Mazenod, a few kilometres out of the CBD, and delegates from the country’s 80 constituencies where the party has active structures converged beginning Friday for the conference that the same day was already being challenged in the courts by disgruntled members.

Announcing her decision to endorse Mofomobe at party head office Seutloali said she withdrew from the race following extensive contemplation, from which she put the unity of the party before her personal ambitions.

“To this stage of the race the two of us have evidently proved to be frontrunners, and we deliberated and decided on a united vote for a single candidate…this informed by my strong conviction in the unity of the BNP,” said Seutloali, adding, “my campaign, as everybody knows, has been anchored on party unity and we want to join hands to ensure a common vision that will lead to which we both strive for – party unity.”

“It is solely for the realisation of that wish of mine that I am withdrawing from the race for party leadership to support Cheese (as Mofomobe is fondly called.)”

Seutloali said she had not been coerced in any way to sacrifice her candidature for party unity and growth.”

Speaking at the same occasion and welcoming his rival’s gesture, Mofomobe revealed that a series of meetings between him and Seutloali had been held ahead of their agreement to join forces. He said this decision was mulled over even before both submitted their intention to succeed ’Maseribane.

“We have a common interest and we have agreed to work together,” he said. Mofomobe appreciated his challenger’s decision, highlighting it as one of the many indicators of the BNP’s strengths as a principled and democratic institution.

“The BNP is exemplary in all things. We are the only party whose constitution allows for a two-term tour of duty for a leader, the only party whose candidates for leadership can hold meetings and deliberate over a meal; where prior to an election we allow our candidates to publicly debate and show their mettle. Now this, an endorsement of a candidate by another while withdrawing from a challenge.”

Seutloali and Mofomobe had pledged to unconditionally accept the results of the electoral conference.

Saturday afternoon the youth brigade burst into passionate chants and songs bidding farewell to ’Maseribane as outgoing leader. He made the unexpected appearance at the conference to deliver an opening address to the delegates for the last time as party leader at the Mofomobe’s invitation.

’Maseribane had been stripped of his prerogative to give the official opening to the party’s conference as leader by a court order borne from a High Court application by some party members who had challenged his continued stay at the helm of the party beyond March 27.

The applicants in the matter had approached the court to, among others, declare that beyond March 27 ’Maseribane be interdicted from passing himself as the leader of the BNP.

They also wanted the court nullify the June 12 BNP elective conference, arguing the conference was supposed to have been held in March when his term expired.

Addressing the delegates, a visibly emotional ’Maseribane appreciated the opportunity to bid farewell to his comrades, indicating that though he was leaving office in an unpleasant manner he would remain a loyal supporter, and avail himself for advice should the new leadership seek it.

He went down memory lane narrating his achievements as the BNP leader and his selfless efforts during that period, assuring those present that he will never walk out of the party.

’Maseribane appealed to members of the party to respect their membership to the BNP, its constitution and traditions as “these will ensure an intact BNP.”

In song the outgoing leader joined the thrilled floor to greet and dance with the delegates one last time as the leader after he delivered his remarks.

Violence erupted during the electoral process that ran into the night and a female delegate was fatally shot by unknown assailants.

Commotion began with dissatisfaction from some delegates who during reception of delegates into the polling hall claimed they were being denied entry, leading to the credentials officials with the assistance of the police closing entry into the hall for some time to allow tempers to cool.

Prior to the shooting there were also incidents of stone throwing by unknown individuals who were reportedly pelting small groups of party members converged outside the hall, as well as vehicles parked within the centre’s walls.

Six constituencies had at this time also lodged protests and the party executive committee was addressing the disgruntled delegates to resolve their complaints.

Following the shooting the victims were rushed to hospital. Police commissioner Holomo Molibeli later arrived at the scene and security was beefed up.

Delegates, however, resolved to proceed with the electoral process that saw Machesetsa Mofomobe elected the new leader. Mofomobe won the race by an overwhelming 295 votes, while Professor Lehlohonolo Mosotho collected 62 votes in second position with third-placed Lesojane Leuta only managing six votes.

’Malineo Motšepe and Lesiamo Molapo withdrew from the race just before votes were cast, while ’Machere Seutloali also abandoned her candidature a day before the membership elected their new leader. Prominent youth activist Seutloali withdrew her candidature for the apex party office – endorsing Mofomobe.

In a statement condemning the shooting, Mofomobe assured party stalwarts and the general public that he will not rest until perpetrators are brought to book, appealing to the police to work hard to investigate and arrest those responsible.

Mofomobe becomes the fifth leader of the party founded in 1959, taking the country to independence in 1966 led by founding leader Chief Leabua Jonathan who was Lesotho’s prime minister from 1965 until he was toppled in a military putsch in 1986.