The tone for the Town Hall Meeting was set by the Head of Chancery, Ms. Rakie Macarthy, as she welcomed the guests and introduced the MCs, SLPP Washington DC Chairperson, Mrs. Fatmata Dausey Wurie and Mr. David Vandy of the VOA. After both Christian and Muslim prayers, Political Parties representatives from NGC (Mr. Lansana Saccoh), C4C(Mr. Aiah Fanday), APC (Mr. Alfred K. Sesay) and SLPP( Mr. Mohamed Bah) were given the floor to make statements – all of them recognized the Free Quality School Education for the positive impact it has on Sierra Leone, among other things they spoke on.

Sierra Leone Ambassador to Washington DC, Ambassador Sidique Wai, recognized all Sierra Leone Embassy in Washington DC staff, organizers of the Town Hall Meeting, those who made the Educational Basket Fund a successful fundraiser (over $31,000) and the hospitality group for the sumptuous meals. He also introduced the Deputy Minister of Water Resources, Mrs. Nimatulai Bah-Chang as the first Fullah female, from Kono to hold a cabinet rank position and one of the Chiefs of PAOPA, the Minister of Energy, Alhaji Kanja Sesay. Among dignitaries present were the Sierra Leone Representative to the UN, Dr. Alie S. Kabba and the Deputy Ambassador to UN, Sierra Leone Mission, and Mrs. Victoria Sulimani. Ambassador Wai then, called the Vice President of the Republic of Sierra Leone, Dr. Mohamed Juldeh Jalloh to the podium.

The Vice President’s message was very invigorating and promising for Sierra Leonean Diasporas and Foreign investors. Dr. Jalloh started by recognizing the contributions of the diaspora by stating that, It is people in the diaporas that have been sending monies to pay school fees, taking care of their parents, paying for basic necessities and even send them to Hajj. Dr. Jalloh opined that their own international community is the diaspora, as the diasporas have been supporting the country in various ways. He thanked all on behalf of His Excellency, Rtd Brigadier Julius Maada Bio and the people of Sierra Leone, for the generous contributions of those in the diaspora for the last forty to fifty years. He then thanked the Embassy staff, members of the SLPP, his friends and family and for the wonderful hospitality to his entourage. Dr. Mohamed Juldeh Jalloh then went on to explain their mission in the last few days in the USA: “I am leading a delegation of government Ministers to engage members of the MCC. They have met with Institutions…..the American people to tell their story”. 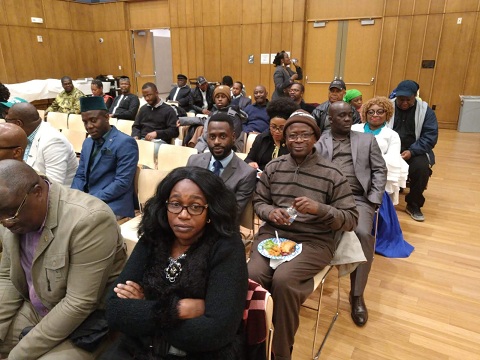 He went on to highlight few that gave clear insights into the challenging dynamics and how the government is grappling with them:

EducationWhen they took office His Excellency President Bio’s manifesto was designed to essentially focus on developing Human Capital; as they believe as a government that when you invest into the development of the human capital, that is the starting point of developing your country, the Vice President proudly said. In that light, they declared the Free Quality School Education and the government took 22% of the national budget for education and focused it on the Free Quality Education for primary and secondary schools students. At the moment, the government of Sierra Leone is, paying school fees, buying learning materials, feeding some meals at schools, providing school buses for over two million students, recruiting more teachers, and they have just recruited five thousand teachers to respond to the demand and building schools as eight out of ten children in the villages want to go to school, the Vice President went on. He then emphasized that “Make no mistake we know the value of education and we are very glad that other political parties have acknowledged the efforts we are making towards the FQSE”. 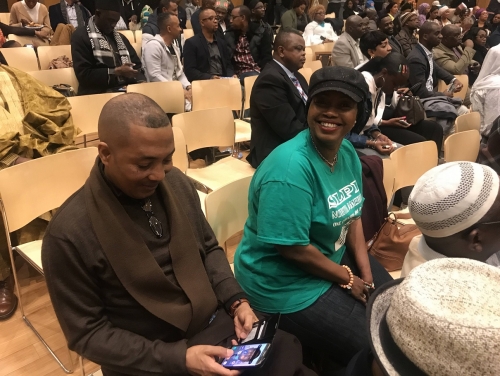 HealthcareWith the increase in budget allocation from 6% to 11.4% of the healthcare budget, the Vice President added that the government of Sierra Leone is either building or opening hospitals in Sierra Leone, every two months; the government now has in Freetown, two maternal and child health hospitals, one in Kissy and one on King Harman road and are planning on recruiting additional 4,000(four thousand) Nurses. He also disclosed that they have engaged Institutions while in the USA, to assist in the Healthcare industry, healthcare teaching programs, how Sierra Leonean expatriates (Doctors, Nurses etc) can go back to assist in the healthcare and to be rest assured that the government is going to put resources into it and that the government is in the process of building Ultra-modern diagnostic hospital to reduce oversees travel for medical services. 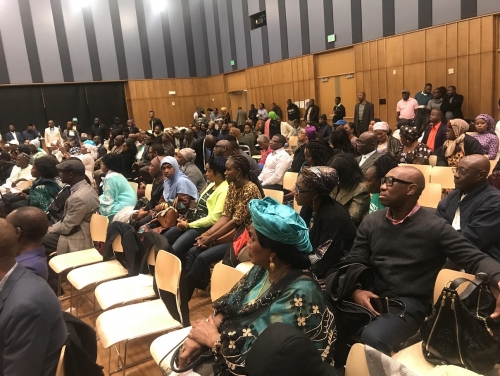 Water ResourcesSpeaking on Water Resources, Dr. Jalloh explained that the government is expanding access and distribution to clean water. They are trying to expand the water distribution in the country as when Guma Valley was established , it was for 3, 0000 (three thousand) people but now the Capital Freetown has a population of 2 million, which is responsible for the shortage, he mentioned.

EconomyDr. Mohamed Juldeh Jalloh highlighted how the government is focusing on improving the economy, creating new avenues to support the social sector and how people can pay their taxes and thereby create jobs. One key sector the government is looking at to improve the economy is Agriculture, especially rice chain development, they have engaged the Africa Development Bank and private sectors in Turkey, to provide funding and he cited Senegal as an example of one African country that does not import rice. Another area to grow the economy, the Vice President added, is Agro business, and again he cited Senegal, Mali, and Burkina Faso who are producing most of their food items in their supermarkets. Under agriculture another key benefit is employment, he said, with expansion of agriculture; those benefitting from the FQSE will be gainfully employed upon completion of their education. Dr. Jalloh pointed out that at the moment, the government is only benefitting license fees from marine resources, but if they provide fish processing centers and be able to export fish, the country can benefit more. The government already have grant to build a fishing habor and fish processing centers to export fish, which will create jobs and thereby improve on the economy. 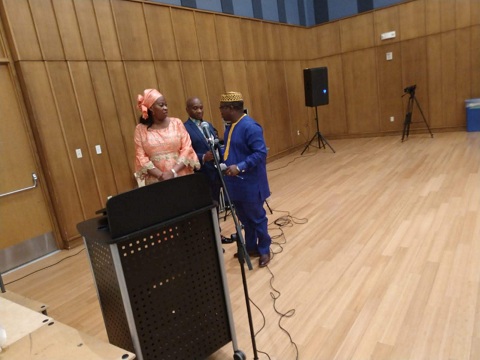 TourismThe Vice President, narrating history, said that in the 1980s Sierra Leone was a tourism center. The government of Sierra Leone is trying to build the tourism sector, by building regulatory framework to attract tourists. The government has also made it cheaper for Sierra Leoneans in the diaspora to travel, they have reduced taxes, etc. for Airlines. In the last budget, they have abolished almost anything that has to do with GST taxes. Sierra Leone is now an entry visa country, and the government has put modalities in place for the entertainment industry: Museums, cultural village, and a break in taxes for hotels.

EnergyThe Vice President revealed that only sixteen percent of Sierra Leoneans were having access to electricity, which was established as a utility energy, but the New Direction government is now moving to productive energy, which has enabled the government to provide electricity to more people in Sierra Leone. Dr. Jalloh reiterated that, the President of Sierra Leone, H E Julius Maada Bio had given the Energy Minister, Alhaji Kanja Sesay, and an ultimatum to provide light on Lumley beach, before the holidays and at the same time are engaging companies to expand the infrastructure, additional distribution lines to provide electricity to the whole country.

Dr. Mohamed Juldeh Jalloh ended by emphasizing the mission of the New Direction government is working hard to ensure that Sierra Leoneans in the diaspora are not paying schools, electricity bills and that this is the government of the diaspora as almost all offices in Sierra Leone have employees from the diaspora. In developing the country, the Vice President encouraged Diasporas to go home and help with their expertise. 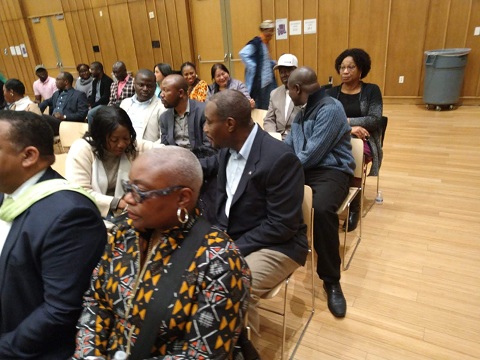 Question and AnswerMariama Turay, Montgomery County Teacher, was concerned about the failure of students in Sierra Leone; she noted that people are talking about Nurses. But she wanted the government to also focus on Teachers.

Mr. Mohamed Nabie, Chair SLPU, reiterated that SLPU for 25 years has given educational support to educational services in Sierra Leone, by building chairs and desk. He wanted to know what the government of Sierra Leone has to offer to people who want to help.

Ms. Millicent Terry, who had been in USA since 1972, answered to the call in 2017 in assisting Ambassador Stevens to assist victims of Mudslide, by shipping medical supplies to assist the APC. She cried that it is a shame and she blamed APC 70% and 30% to SLPP, because the medical supplies were still sitting at the Sierra Leone Ports Authority. She wants the government to take people in the diaspora seriously and she is speaking for every Sierra Leonean.

Mr. Sahr Ernest Pettiquoi’s, concern was about giving priority to Sierra Leonean Diasporas, who want to invest in Sierra Leone.

Mr. Lansana Saccoh was concerned about a comedian that was jailed for making mockery of the President of Sierra Leone.

In responding to these questions and concerns, the VP agreed with the Madam Mariama Turay, that the expertise of teachers in the diaspora will be tapped into, in as much as they are starting with the Nurses. Dr. Jalloh also stated that the government of Sierra Leone will be hiring 5,000 teachers to meet the demands of the students as more children are now enrolled in schools more than before. Dr. Jalloh then stated that the government has agreed to revitalize the diaspora office in Sierra Leone, at the end of the day they can tap into the diaspora’s expertise.We have established the National Investment Board that is in the VP’s Office, Chaired by President, Co-chaired by the VP, with infrastructure in the VP’s office, he went on. He further explained that, the board is a one stop shop for anyone who wants to invest in Sierra Leone and there are two categories: “those who wants to support social sector, to providing humanitarian work, building schools or support the hospitals. Those who want to invest in Sierra Leone, there is the National Investment board. The Board is currently working in its advisory capacity; it has passed Cabinet, waiting on Parliamentary approval. But it is functioning. In that regard we are establishing special economic zones. Those that want to do business, like build factories that are creating employment in certain key sectors, we can offer tax break. We are already providing free land for those who want to build hospitals, free land for poultry, agriculture and reducing taxes for a period of time. Sierra Leoneans will be given priority”. In responding to the arrest of the comedian, the VP thought Mr. Saccoh was going to congratulate his government on the Seditious Libel law they are trying to expunge. And he made it very clear that there is a difference between freedom of speech and disrespecting the President of the country. You can speak about the policies, but be mindful attacking the individual, the Vice President firmly stated.Proclamation

Council member at large, Montgomery County, Maryland, Mr. Will Jawando, on behalf of the Montgomery County presented the Proclamation to the Vice President of Sierra Leone, Dr. Juldeh Jalloh.

The Sierra Leone Deputy Ambassador, Washington DC, Mr. Sheku Mesali, thanked all for coming and for the success of the Town Hall Meeting, held on November 23rd, 2019, in Silver Spring Maryland, USA.

Diasporas are at the moment in Sierra Leone, enjoying with family and friends, adding to the infrastural, economic, cultural, educational sectors and other sectors. They have for forty to fifty years sustained the economy of Sierra Leone.