Africa-Press – Eswatini. A striking image of a caracal hunting flamingo in Tanzania has won first prize in the 2022 Nature TTL Photographer of the Year competition.

A Cat and Its Prize, by US photographer Dennis Stogsdill, beat 8,000 entries from around the world.

“This is nature at its most raw,” Nature TTL founder Will Nicholls says.

“The caracal is soaked from chasing the flamingos through the waters but has come out on top.

“The contrasting colours against the dark surroundings really make this image pop – a wonderful scene to have been able to observe, no doubt, let alone capture exquisitely on camera.”

Here are winning images from the other categories, with descriptions by the photographers. 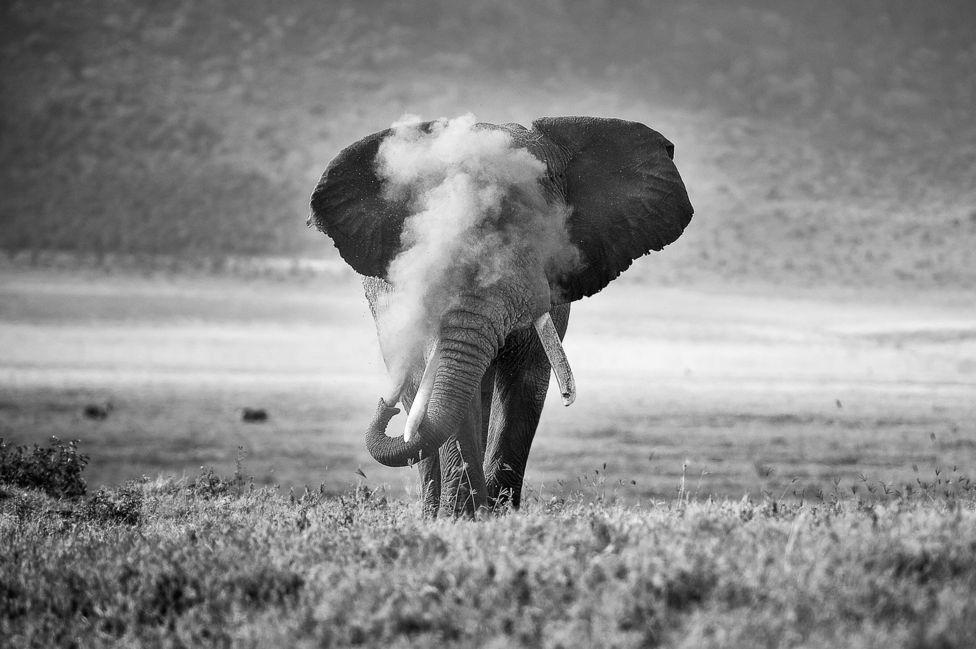 After wallowing in the mud, this majestic African elephant was walking towards our safari vehicle, in the Ngorongoro Crater, in Tanzania, Africa.

It sucked up some dust in its trunk – and before long, it turned its trunk upwards and released a huge puff of dust.

My camera was set to continuous shutter and I was clicking away like crazy – an exhilarating moment. 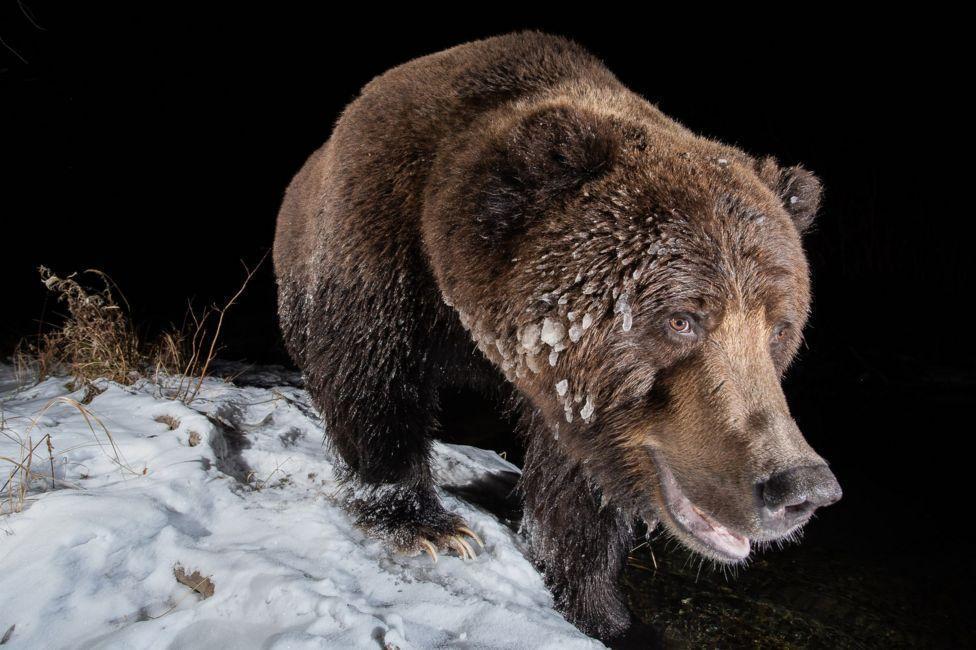 In the Yukon, Canada, a unique phenomenon happens every year.

The bears will freeze their fur and stay out until the month of December, despite the temperature reaching as low as -30C.

This picture was taken by a camera trap set up along the river, about two days before a snowstorm.

A snow-leopard scans for prey across the jagged peaks of the Ladakh mountain range, in India.

I captured this image during a three-year DSLR [digital single-lens reflex] camera trap project on the Indian Himalayas. 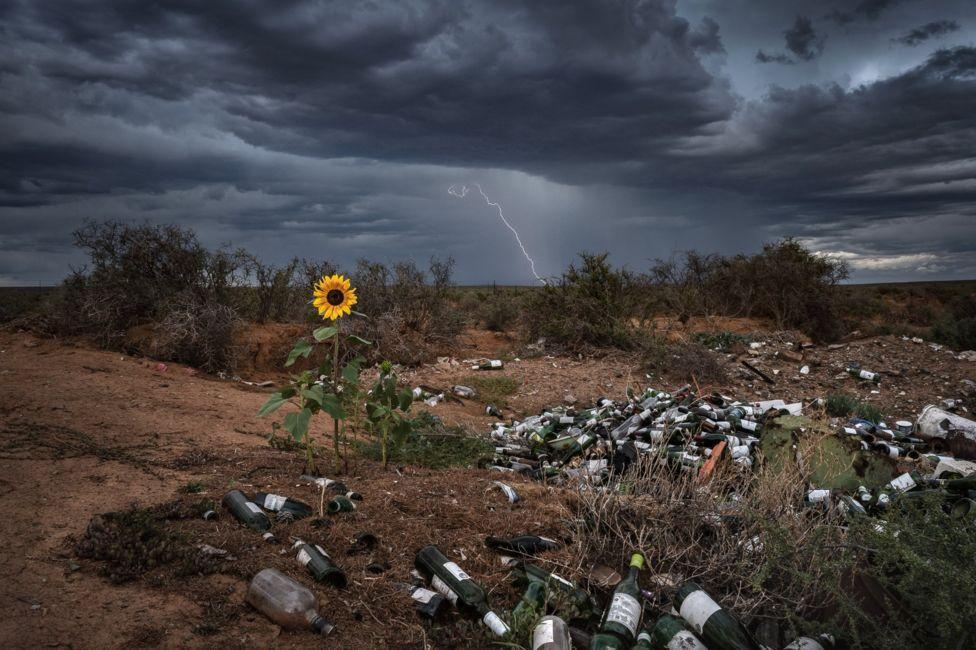 A thunderstorm passes over a sunflower which, against the odds, has managed to survive on a rubbish dump in the semi-arid Karoo region of South Africa. 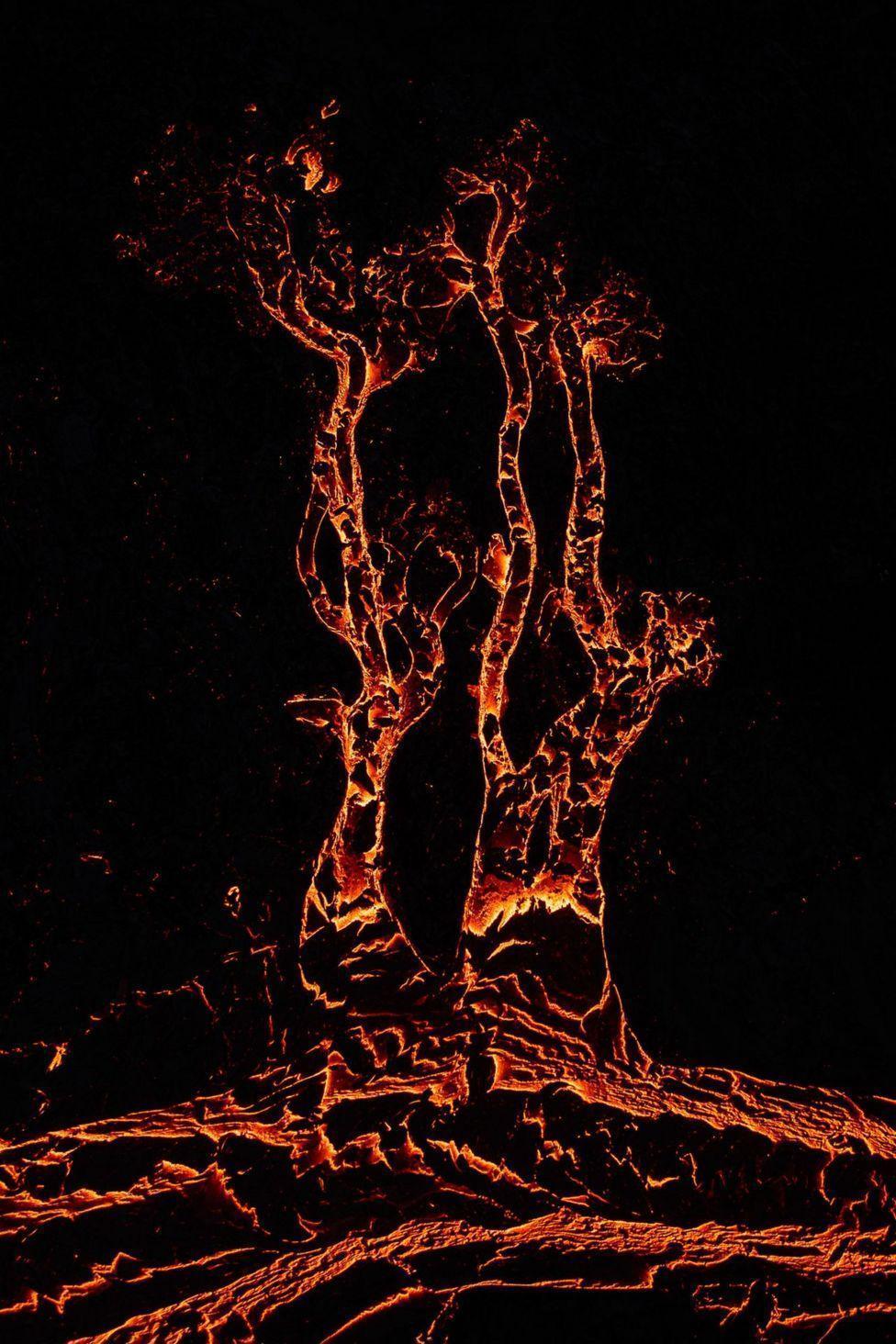 An eruption began in March 2021 at the Fagradalsfjall volcano, in Geldingadalir, Iceland.

I captured this image on the 17 September, as the lava flow that day was spectacular.

Small World, winner: The journey of a moth, by Tibor Litauszki 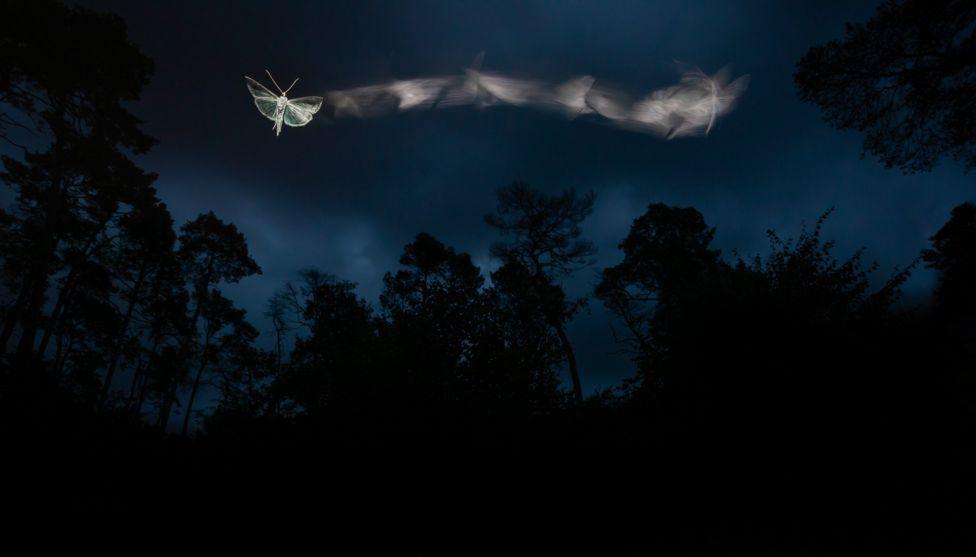 I managed to photograph this moth in summer at dusk.

To keep track of the flight, I used an LED [light-emitting diode] headlight and lit the moth with a flash.

I made the twilight mood with multi-exposure inside the camera. 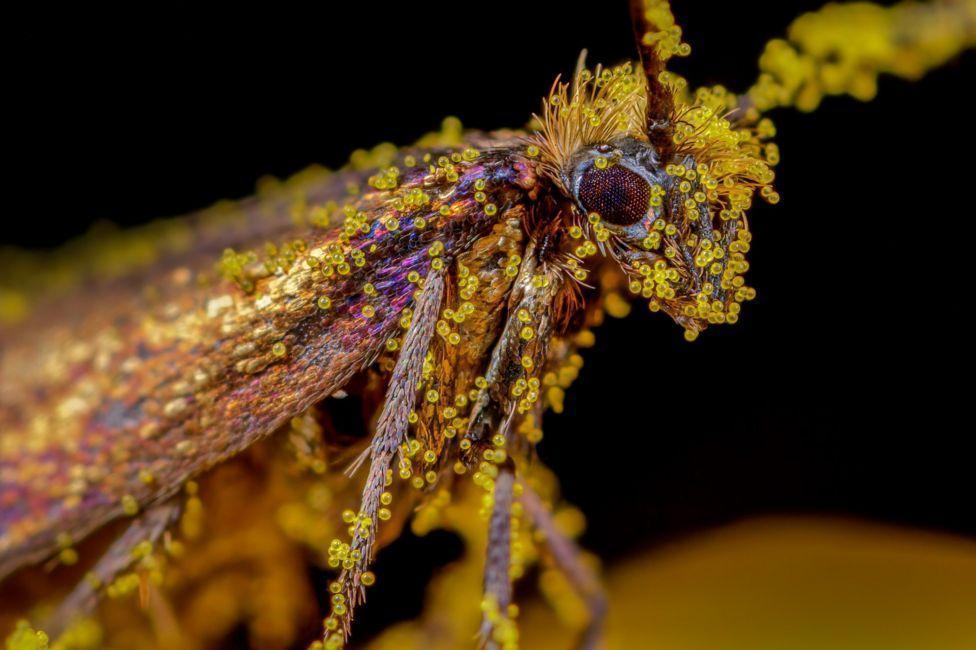 A moth, Micropterix calthella, covered in golden balls of pollen from a creeping buttercup flower found in Mutter’s Moor, near Sidmouth, Devon.

The image is a compilation of focus-stacked pictures.

The Night Sky, winner: The top of Australia, by Josselin Cornou 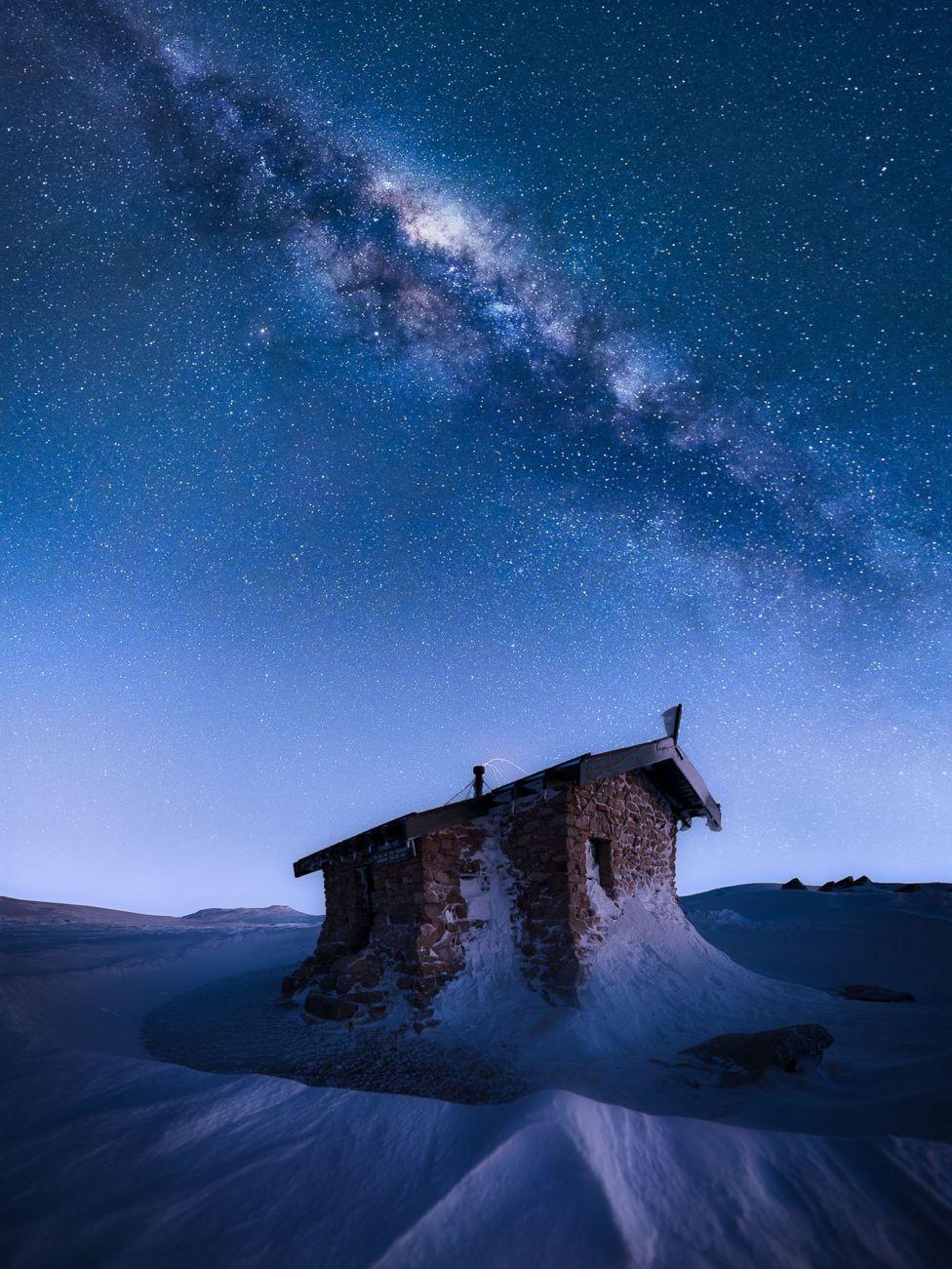 This photo was taken during a trip to Mount Kosciuszko, the highest point in Australia.

It is also one of the best places to capture the Milky Way, in part thanks to the dark skies.

The Night Sky, second place: The Astonishing, by Mauro Tronto 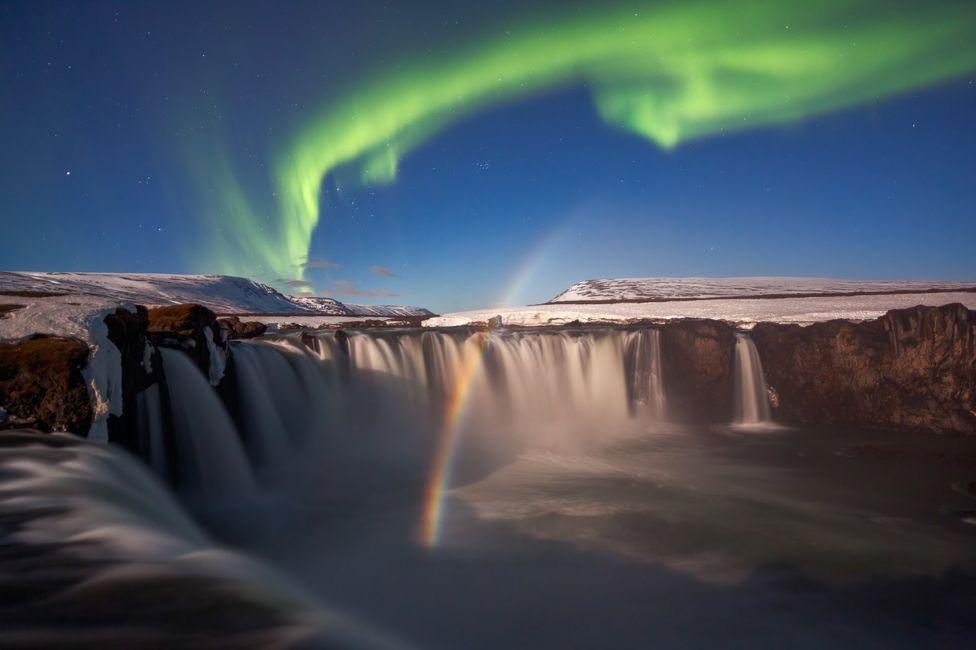 This shot is mixture of magical elements – the moonlight refracting to generate a magnificent rainbow, the beautiful northern lights just above and Godafoss, the spectacular waterfall in Iceland.

All elements are real and occurring at the same time. 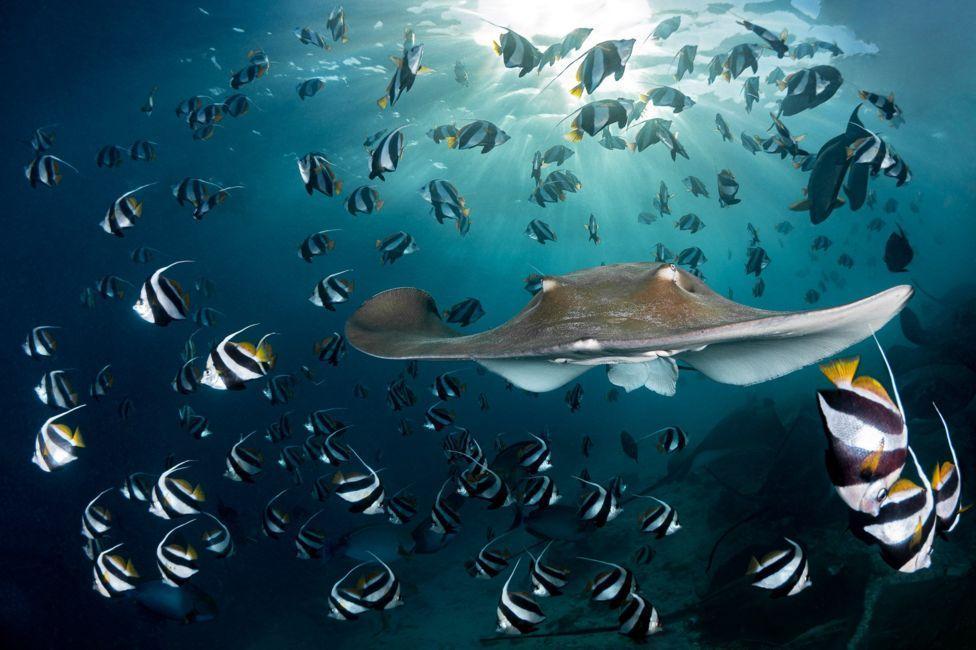 A pink whipray splitting a school of bannerfish, shot against the setting Sun on a late afternoon at the famous dive site Tuna Factory, located close to Malé, the capital of the Maldives. 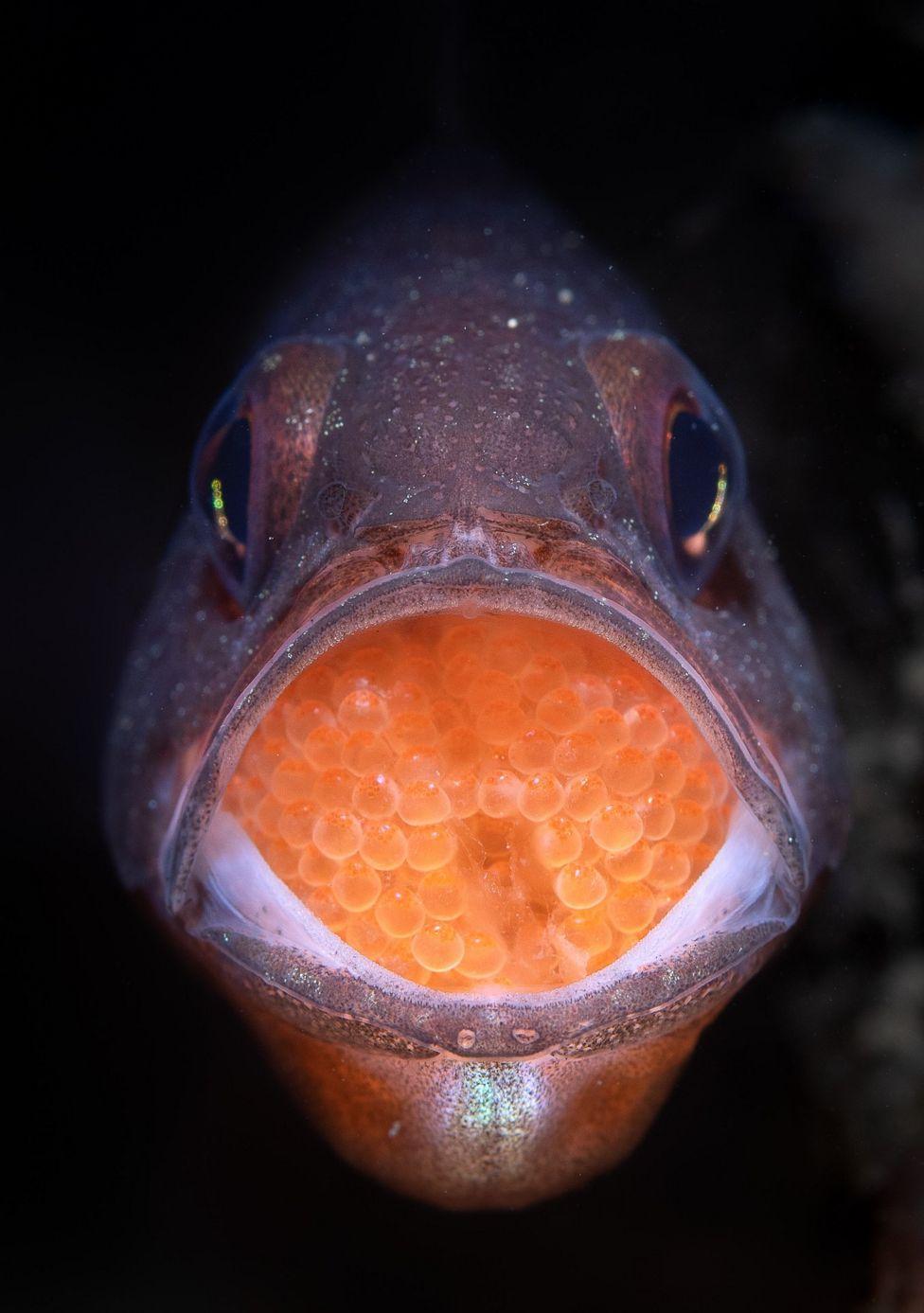 A male eastern gobble-guts fish carries eggs in its mouth.

He will continue to hold the eggs for a month, before hatching occurs. 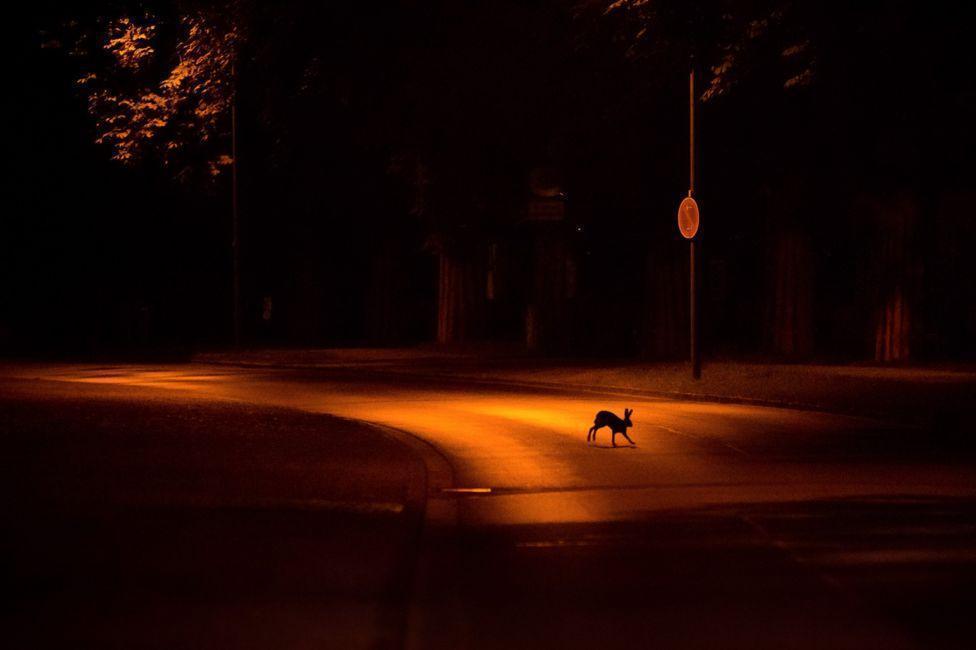 During the daytime, this place on the outskirts of Kassel, in Germany, is crowded with people going about their daily business – but at night, it belongs to the animals. 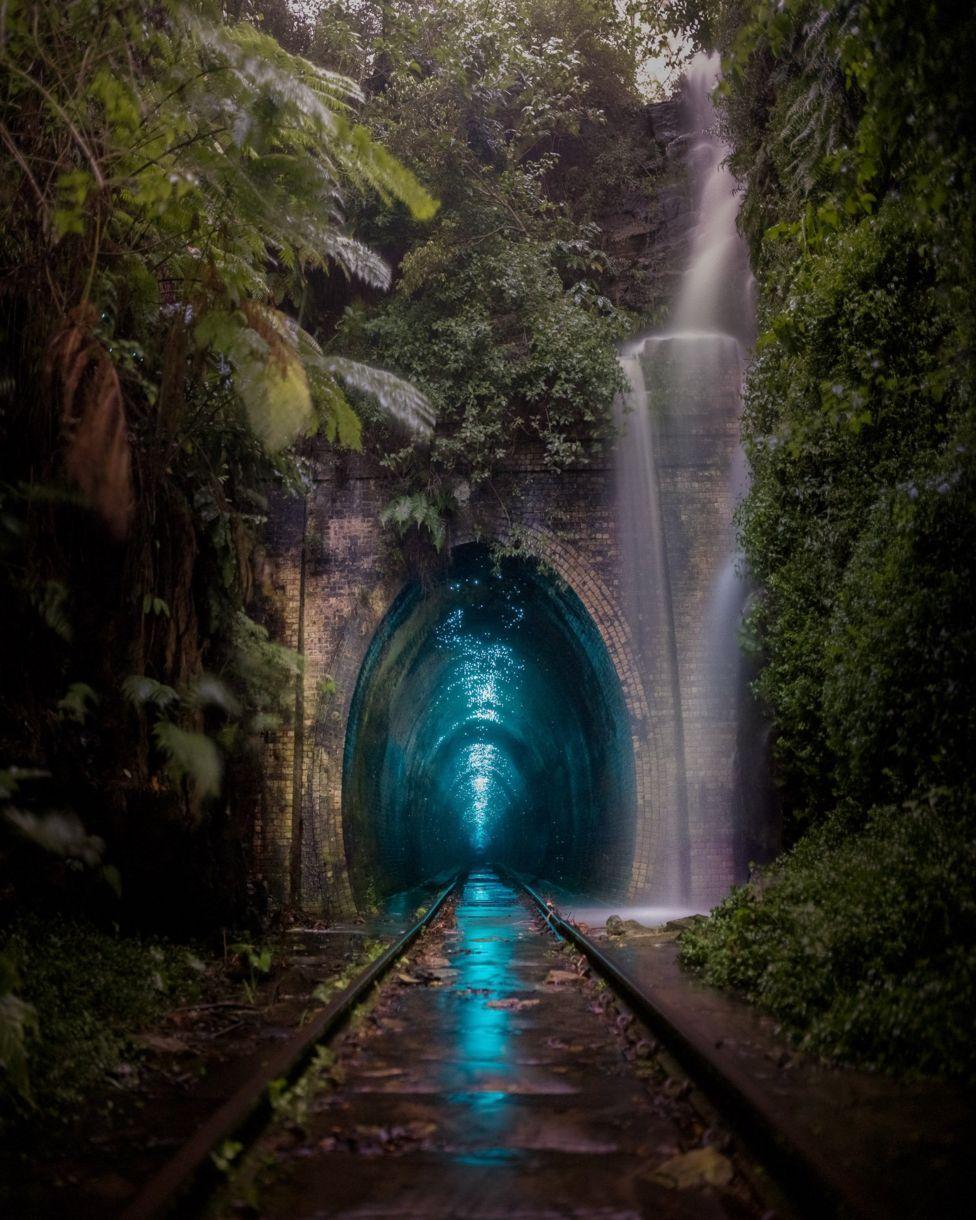 A city of glow-worms are populating this old abandoned train station in Helensburg, Australia, providing beautiful lights on rainy days.

To make this photo happen, I had to travel to the location during a storm, as an ephemeral waterfall would start to appear.

A day after this photo was taken, the tunnel was flooded.

Wild Portraits, winner: I see you, by Tomasz Szpila 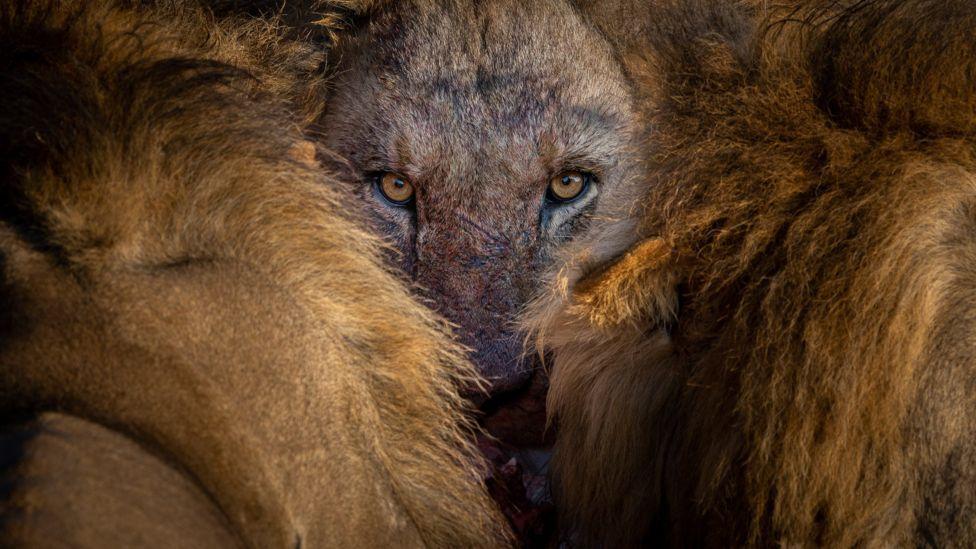 When a huge lion looks you right in the eyes, you immediately forget that you are sitting safely in the car.

Instinctively, you cower and slowly retreat deeper inside the car so as not to provoke a predator.

Fortunately, he and his brothers were busy consuming the young buffalo that had been hunted several minutes earlier. 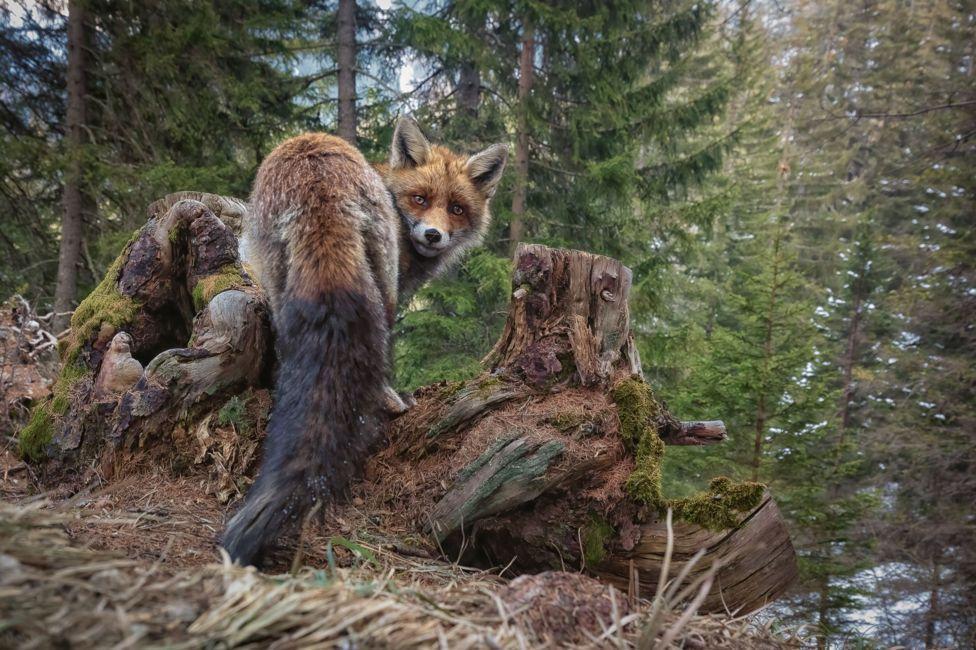 I cautiously observed this fox for a month in Graubünden, Switzerland, and noticed that this place was well used as a marking spot.

The picture was taken with a wide-angle lens with a remote shutter release, so as not to disturb the fox. 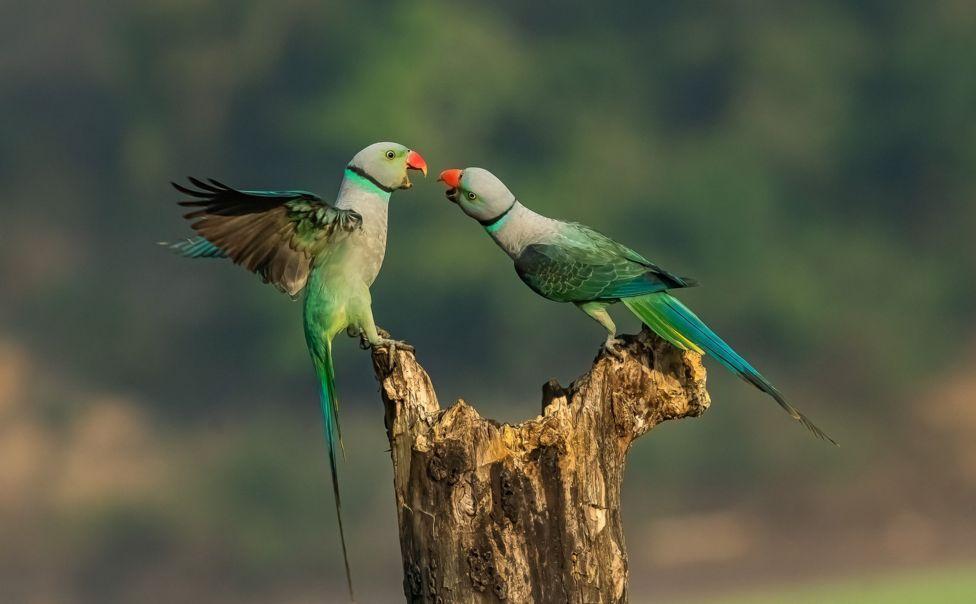 They are also called blue-winged parakeets.

They usually flock together and are seen in huge numbers.

In the midst of a bunch of activities, it was my privilege to shoot this image, from a bird hide in Karnataka, India.

These two are fighting over a stump that had paddy grains as its feed. 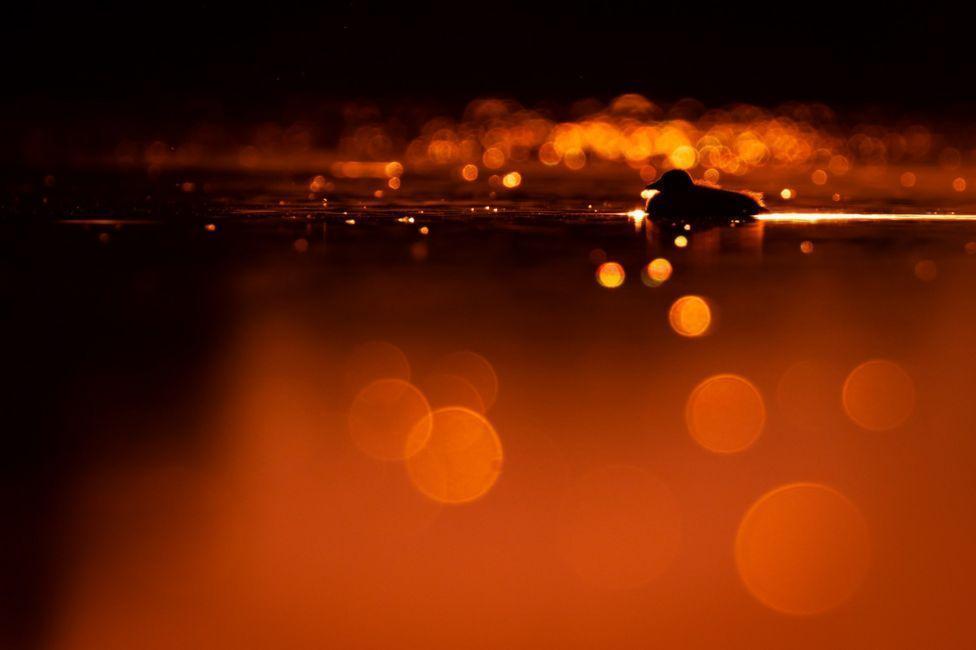 My local pond, near Poznań, in Poland, is great place for grebes.

There are at least four breeding species on this pond and they’re pretty tame because fishermen are often there.

This little great crested grebe was posing for me through all the time that Sun was setting.

Foods to avoid before bedtime

SANTA LUCIA BEING AUCTIONED FOR E1M