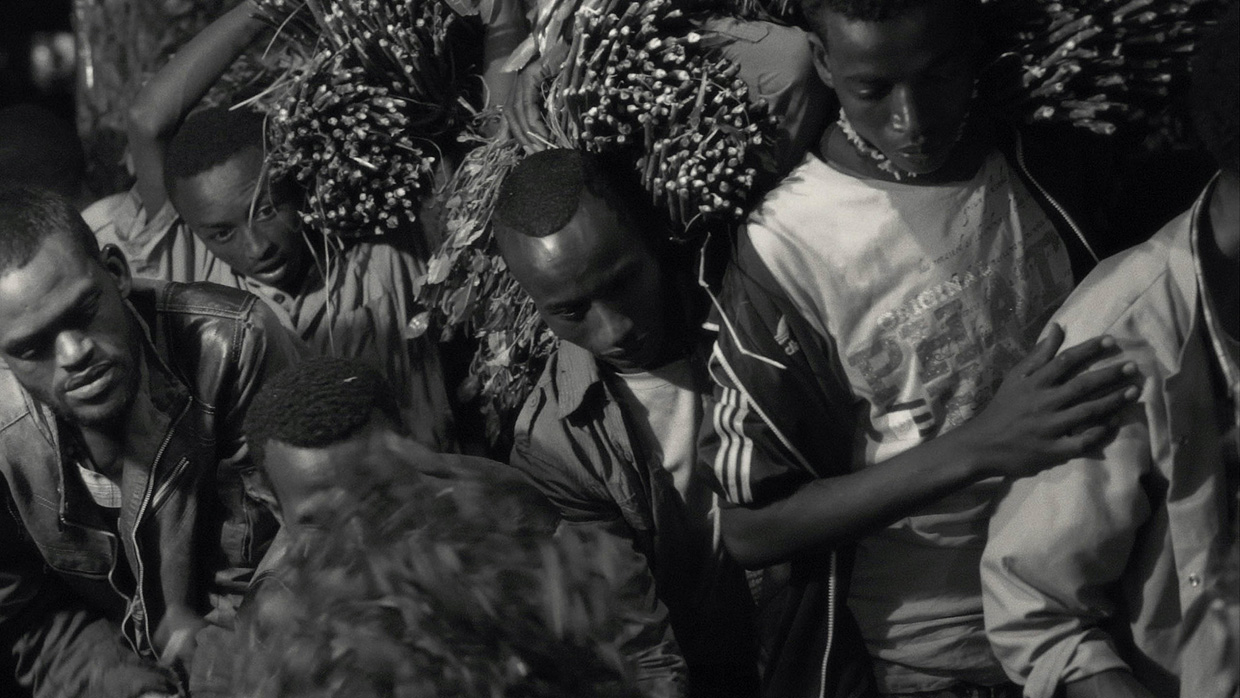 Jessica Beshir’s feature debut Faya Dayi is all about khat, a plant native to Ethiopia harvested and known for its euphoric properties when chewed. On another level, the film is about khat’s cultural significance as a major cash crop, analyzing its role both economically, socially, and generationally. Editors Jeanne Applegate and Dustin Waldman share the fine line between crafting a visual drug trip and spiritual resonance, extracting meaning from beautiful images, and the liberatory aspect of editing a conceptual film.

Filmmaker: How and why did you wind up being the editor of your film? What were the factors and attributes that led to your being hired for this job?

Applegate: I was recommended to Jessica by a friend of a friend. I watched her short film Hairat and was captivated by it. We met for coffee and Jessica told me all about the world of khat, the Sufis and the city of Harar. We connected over our appreciation for filmmakers like Andrei Tarkovsky and Khalik Allah.

Waldman: I came in towards the end of the process as a fresh set of eyes to finish the film. I had seen Jessica’s short Hairat, which blew me away, so I was very excited to be able to come aboard and work on this project. I was recommended by my friend and collaborator Max Allman, who was a consulting editor on the film. (He also recently produced and edited Bo McGuire’s fantastic documentary Socks on Fire, which I highly recommend checking out.)

Filmmaker: In terms of advancing your film from its earliest assembly to your final cut, what were goals as an editor? What elements of the film did you want to enhance, or preserve, or tease out or totally reshape?

Applegate: My goal as an editor was to help actualize Jessica’s vision of the film as a prayer. There is an almost infinite freedom when you set out to make a film in a very conceptual manner, and I spent a lot of time listening to the stories Jessica told about the people and places in the footage and trying to capture something of that essence in a scene. It was amazing footage to work with, very rich and poetic. There was always the danger of making something that looked gorgeous but failed to convey the deeper meaning. We had to make sure to maintain a narrative thread so that the film didn’t end up as just a procession of beautiful images.

Waldman: Coming in as I did towards the end of the editorial process, there was already an excellent cut to work off of by the primary editor Jeanne Applegate. There were a few ideas Jessica and I wanted to continue exploring—certain elements we wanted to bring to the fore or recontextualize, etc. The movie holds a delicate balance between the sublime and a rather cold reality, so there were times when we wanted to play with that balance a bit more, in one direction or the other.

Filmmaker: How did you achieve these goals? What types of editing techniques, or processes, or feedback screenings allowed this work to occur?

Applegate: The film really started to come together when the translations came in. Jessica knew generally what people were saying before then, but the translations brought the people fully into focus. We experimented with when to have a scene play out in a vérité style and when to overlay the dialog for a more dreamlike effect, often using the voice of one person over the image of another in order to connect the two.

Waldman: I worked very closely with Jessica to develop the cut and help her realize her vision. I would say the most useful process for this project was building out a few different ideas and angles for a given sequence and then fine-tuning the preferred one side-by-side. I was also very fortunate to have so much great editorial work at hand to draw from in the project.

Filmmaker: As an editor, how did you come up in the business, and what influences have affected your work?

Applegate: I started out hoping to be an animator, but my animations were terrible and I had to do a lot of editing to fix them. I began editing indie films relatively late in life, as I worked as an assistant editor at Pixar for several years after college. I draw influences from films but also increasingly from literature. I really enjoy analyzing a story’s structure, changes in perspective and voice. If I like a story I’ll read or watch it over and over again to understand the structure and the choices that were made.

Waldman: I started out freelancing as an assistant editor, doing work in the music video and advertising worlds. I eventually edited Xander Robin’s feature narrative Are We Not Cats, which premiered at Venice in 2016. Since then I’ve worked as an editor on a few other features, as well as several short films and music videos. I also regularly edit videos for the Museum of Modern Art. The influences on my work are constantly changing, but for this project we were frequently referencing transportive and meditative filmmakers like Andrei Tarkovsky, Apichatpong Weerasethakul, Carlos Reygadas and Ra’Mell Ross.

Filmmaker: What editing system did you use, and why?

Applegate: We used Premiere for Faya Dayi because that’s how the project was set up when I came on. I’m comfortable using either AVID or Premiere. I find Premiere to be a little more user friendly and better for effects work, but AVID is much more stable and better for media management.

Filmmaker: What was the most difficult scene to cut and why? And how did you do it?

Applegate: The most difficult scene for me was the one with the farmer reminiscing about his father growing coffee on their land. We went back and forth deciding how much information to include about the practical reasons for growing khat instead of coffee, such as reduced rainfall due to global warming and the coffee plant requiring more time in between harvests, versus allowing the farmer’s nostalgia and the memory of his father to lead the scene.

Filmmaker: Finally, now that the process is over, what new meanings has the film taken on for you? What did you discover in the footage that you might not have seen initially, and how does your final understanding of the film differ from the understanding that you began with?

Applegate: Jessica’s concept of the film as a prayer, with all of the solemnity and awareness of the spiritual world that entails, transformed the film into something that I couldn’t have imagined when we began. I initially assumed that the film was about khat as a drug and that we would be, among other things, creating some kind of a visual drug trip, but Jessica had a much deeper understanding of what khat means to the Sufis, farmers and activists she filmed. The spiritual aspect of khat came through in such a way that the fact that it can be used as a drug almost didn’t matter.

Waldman: I think the beauty of Jessica’s film is that you receive it in a kind of dual way while watching. It has a very real and urgent documentary function, and then also a mystical and universal aspect that hits you in a more personal or spiritual way. Both of these aspects became more real and pronounced to me throughout the process of working on the movie.