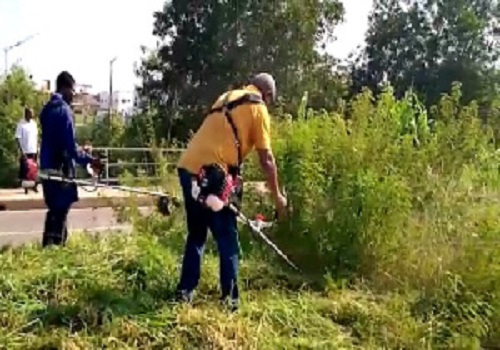 Former President Mahama with a back mount weeding machine

This action taken is to trash down the unwanted grass in the middle belt of the ‘Mahama’ Road in front of the new Military Cemetary which is serving as a blockee for motorists who ply that route towards the roundabout.

The former president was joined by other teams for this cleanup exercise.

Few weeks ago, actor and politician, John Dumelo was also seen pushing a truck full of refuse after a cleanup exercise organised by the youth of Mempasem, a suburb of Accra.

John Dumelo, who is vying for Ayawaso West Wuogon parliamentarian seat on the ticket of the National Democratic Congress (NDC) in 2020, was subsequently slammed by a section of the public as they argued he did so purposely for votes.