AfricaPress-Kenya: Candidates in the ongoing KCSE examinations have expressed concerns over the tests, terming it as one of the most difficult exams they have ever done.

Based on the feedback from the first week, some students and even teachers feel the setting was a bit unique, with most questions testing application aspects of learning.  Many have been left scratching their heads but said they are hopeful the second week will be better.

Justus Omollo, a student at a school in Nairobi said that the exams have proven to be harder than they had imagined they would be.

“I am not one to complain about exams but…I think Knec has played a trick on us. What I saw in the exam room last week was something else. The exams are too hard,” Omollo said. 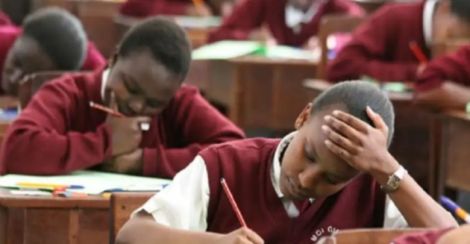 Omollo is not the only KCSE candidate who has expressed concern.

His classmate Daniel told that the tests are set in such a way that one has to be very smart to even come with an answer.  He specifically mentioned Chemistry and Mathematics papers done last week.

Daniel also said that despite conducting thorough revision with the help of his teachers, exams have proven to be tougher than his brain can comprehend.

Millicent, another student from a Nairobi high school said that she was hoping to do a course in Information Communication Technology (ICT), but the hopes are slowly fading away.

Her request to the ministry of education is that they should consider lowering the cut-off points for university entry for the candidate sitting for KCSE in 2021.

“I am humbly requesting the ministry of education to revise the cut-off points as soon as the exams are completed. These are not ordinary exams. They are meant to shape our future. How can we do that if the government will not resolve to intervene?” She questioned.

Another student from a school in the central region said that the exams that they have already done covered some syllabus which they had not completed.

“Before we started the exams, I can remember Magoha saying that we should not be worried about passing the exams. He assured us that he knew the circumstances under which the ongoing KCSE was being done. I doubt if that was true,” Joan lamented.

A mathematics teacher at a school in Nyanza said that the claims by the candidates could be true considering the rush that was put by the ministry in ensuring the candidates sit for the exams.

“I cannot entirely confirm that the exams are as difficult as some of the students claim. However, there is a higher possibility that they could be experiencing difficulty in responding to the questions as far as the disruption of the school calendar is concerned,

According to the teacher, some of the questions presented in the exams are usually done in-house and are meant to prepare the students for possible hard national examinations.

The government through the ministry of education had promised the candidates that they were aware of the circumstance under which the exams were being done and that not being in school for almost a year would not be a present any challenge.

While speaking to Chavakali High School students on March 6, Magoha asked the student to deceit from any panic over the KCSE exams.

“Do not worry about the examination. We are aware you were at home for nine months, so your hope must remain alive. Do not get stressed. If you believe in God, you will all pass,” the CS assured the students.

8 students were on Thursday, April 1, found with cell phones in their examination rooms.

The CS also announced that some 15 individuals had been arrested selling fake exams and would face the full wrath of the law.