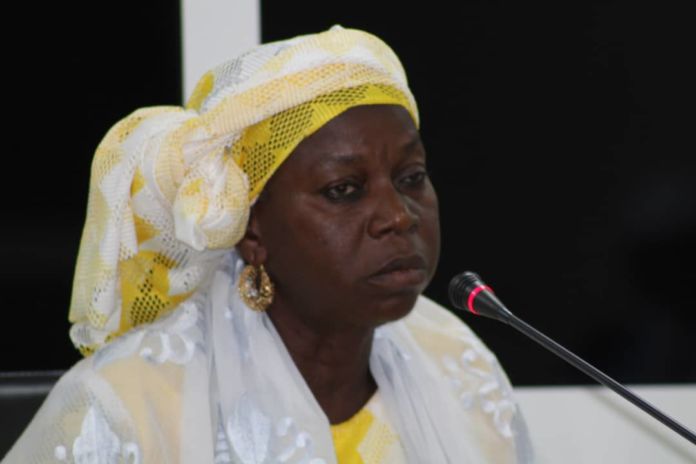 Fatoumata Camara, a victim of the 14th April 2016 UDP demonstration has testified before the TRRC about the torture meted out to her while she was at the NIA.

Camara was the chairperson of the United Democratic Party (UDP) at Ebotown/Jeshwang areas.

The Basse born said on 14th April 2016, she was on her way to a marriage ceremony of her sister’s daughter and found many people at the Westfield junction.

“The majority of the people at Westfield were members of UDP,” she said, adding “these are people I knew and I used to work with them.”

She said the protesters were not holding anything in their hands and were not doing anything. She added there were women and children.

“There was someone among the UDP crowd holding a white banner and I asked a fula man to take the photo of it with my phone so that if I go home, my children will interpret it for me,” she said.

She said in the crowd, she saw Falang Sonko, Solo Sandeng and others.

The witness said even though Falang Sonko and Solo Sandeng asked her to leave, she was adamant to know what was happening and she decided to delay her mission. She said she sat somewhere not far from the protesters viewing them from a distance. She told the Commission she saw a police officer who came to arrest Solo Sandeng, but the people resisted and said Sandeng would not be arrested. She added that it did not take long for the paramilitary to arrive at the scene with their truck and began arresting people.

“Some of them (paramilitary personnel) were holding batons. Those without batons were chasing the people,” she said.

She said she observed that the paramilitary were kicking people and those who fell down were dragged and thrown in the truck.

“The place was overcrowded, but within a few minutes later the place became empty,” she said.

“They asked me to stand up and when I got up, one of them gave me a nasty slap and then insulted me,” the witness said.

She said she was thrown inside the paramilitary truck where she met over 40 people. She said they took them to the PIU headquarters where they were made to stand in the sun for a while before they were taken into an open hall.

She said a man told former Mayor Yankuba Colley that the matter happened under his municipality and therefore, he should try to negotiate for their release. She said Yankuba Colley said he won’t do that but he will ask Ousman Sonko – the then Minister of Interior to tell him what to do.

She said Solo Sandeng was not brought at the PIU headquarters. She said while they were sitting, Nogoi Njie and three men were taken away.

“After that, we were put on hand cuffs and we were put in a vehicle and taken away,” she said.

She said they were taken to Mile II. She said around 2 am, a man came for her and Fatoumata Jawara together with several people and took them to the NIA.

“When we arrived at the NIA, we heard people screaming and the screaming was loud,” Camara said, adding “these people were tortured.”

She said the screaming was coming from the interior part of the NIA complex.

“The screaming lasted for a long time,” she said.

She said Lang Marong, Fatoumata Jawara, Falang Sonko and herself were taken into a room for interrogation. She said they were asked the reason for embarking on the demonstration. He said a man came and asked them to sit on the floor.

She testified that she was called outside, but before she left the house, a man who was hiding behind the door put a plastic bag over her head and they took her to a room that has a bed.

She said she was placed on the table like bed and tortured.

“Some held my legs and hands. They beat me. They beat me until I fainted. When I became unconscious, they picked me and poured cold water on me. When I regain consciousness, I found myself lying on the ground. I heard them saying ‘oh she is alive, oh she is alive, and they came again and began beating me,” she said.

She said they beat her all over her body until she fainted again. She said she was saved by one of them who told the men to stop the beating. She added that the man carried her and placed her near a door.

“A man came and kicked me. I tried to get up but I couldn’t walk,” she said.

She said she demanded water and when it was brought, one of them kicked the cup and the water spilt on the floor.

She said she was picked by two men who took her back to the interrogation room before a panel. She said they were asked who was behind their demonstration.

“That time I could not talk or walk,” she said.

She said when she told them that she was not part of the demonstration; they took her to a room where she found Nogoi Njie and Fatoumata Jawara.

“When I got up, I wanted to go to the rest room and I was put in a wheel chair. I used to urinate blood for 15 days,” she said.

She said a doctor at the NIA Clinic called Sanyang attempted to inject her, but she refused to be injected believing that she could die from the injection for it may be poisonous. She added that the clinic where she was treated is inside the NIA complex.

She said her whole body was wounded and her legs were nearly paralyzed.

“I felt like dying than to undergo such horrific pain. I could not sit or lie down. In fact if I wanted to pray, I had to lie down on my stomach to be able to pray. My body from head to my back and other parts of my body were all paining,” she said.

She said she spent about a month under detention at the NIA.

She said former Operations Director of NIA Sheikh Omar Jeng told her that the more they beat them, the powerful they become. She said both Nogoi Njie and Fatoumata Jawara were tortured, adding Njie’s finger was broken and Fatoumata Jawara’s back had a problem. She adduced that Sheikh Omar Jeng alias Sir Jeng moved them from where they were to a room that had three doors before getting in.

“Our food wasn’t good. Our beds weren’t good. We had to endure sleeping with flies at night and we went to toilet in the same room,” she said.

She said they spent 8 months in prison and after they were released when Jammeh’s government was ousted on 1st December 2016.