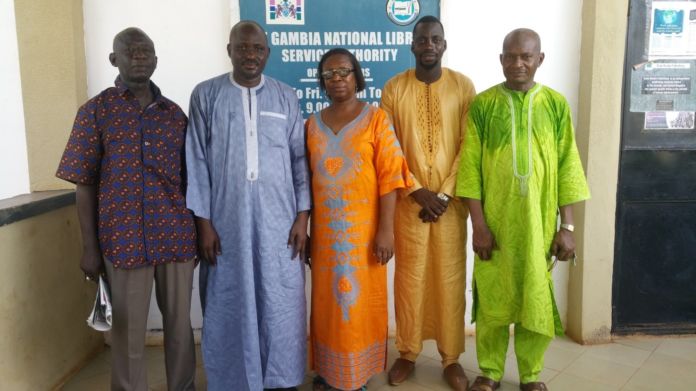 In his latest routine visits to institutions within his constituency, Hon. Ousman Sillah, National Assembly Member (NAM) for Banjul North, on Friday, 18th October, 2019, launched a formal campaign for support to revitalise and enhance the services of the Gambia National Library in Banjul.

The Banjul North representative announced this campaign after meeting with Mrs. Matilda Johnson, Director General of the Gambia National Library Service Authority (GNLSA), and her senior staff at the library complex.

After thanking the Director General and staff for according him and his team a warm welcome, Hon. Sillah said this is part of the routine visits he conducts to institutions that are situated within Banjul North constituency.

The Banjul North NAM started by extending his apology for not being able to visit the library as regularly as possible after his first visit and which, he said, is owing to his very busy schedule attending to numerous and other pressing issues.

Hon. Sillah said this time he is coming officially to engage and to encourage the management to continue with the good and noble work they are doing to help people acquire knowledge.

“My coming here therefore is to encourage you and to acquaint myself with the work you are doing and the challenges you are contending with and see how and where I can come in,” said the Banjul North representative.

The Banjul North lawmaker said they have numerous responsibilities as elected National Assembly members. He added“We have legislative responsibilities in making laws that you may need as an institution to help improve and ensure the efficiency and effectiveness of the services that you offer to the public. You may need policies that are also within our domain to support as well as resource allocation since we approve the allocation of resources. We also engage in advocacy and not only for government to give more support to this institution, but also the non-state actors, comprising institutions and individuals both within and outside of The Gambia.”

Hon. Sillah announced that he will formally launch a campaign and advocate for support for the National Library at the level of the Assembly and executive and even making representation to ministry, if necessary, and also to Gambians and friends of the Gambia both at home and abroad.

Hon. Sillah assured that this visit is going to mark the beginning of a very fruitful relationship between the Office of the National Assembly Member for Banjul North and the Gambia National Library Service Authority.

He said in conclusion “I now want to hear from you the issues that you are grappling with, the challenges, and how you think I can come in, in terms of support and how to support you. This is necessary because those who are ready to support you may want to know how and where to do this but I want every support to the National Library to be channelled through you. My role is simply to pioneer the campaign and be the leading advocate but all the support should be directed to the management of the institution.”

In her welcoming remarks, Mrs. Matilda Johnson, Director General of the Gambia National Library Service Authority (GNLSA), said it is a great honour for her and her management to have the sitting National Assembly Member of the area, Banjul North, visiting the Library.

“We do hope that your visit will make a big difference not only in the environment of the Library but also with regards to the staff, capacity and other issues, which are connected to the Library and the services,” said the Director General.

Elaborating on the challenges confronting the National Library, Mrs. Johnson started with the environment by noting that the facility is built on a swampy area with lot of salt water penetrating the building from the ground.

“When it rains and going towards the back it’s always flooded with all these creeping things moving all around the place,” she said, adding that snakes are seen around and which is not safe for the people, including the caretaker who stays there.

She said there is no  fence separating the Library premises and Gambia Senior Secondary School because all the cement brick fences that were erected there in the past came down because of the salinity and low water level in the area.

The second challenge she noted is the infrastructure as the building that housed the library was constructed by the British government and handed over to the Gambia government for use in 1976. She said it was a gift to replace the British Council Library, the precursor of the Gambia National Library, which was opened in 1946 in the buildings now housing the present National Museum. She added that this was accompanied by the training of the first professional librarian and the provision of shelves and some of which are still there at the lending section of the library.

The DG said the Library was initially a department under the ministry of education and that it was later elevated to a semi-autonomous status with a library board. The institution, she said, was eventually transformed into an authority. “Nevertheless, we are still subvented one hundred percent and are still under the ministry of basic and secondary education,” she noted.

Mrs. Johnson said even if they are an authority, it is just in name since authorities are meant to be income generating but which they are not doing. “We are part of government, even though we have the name authority, because we don’t get money anywhere else other than what we receive through the ministry of finance,”she added.

Still on the issue of infrastructure, the DG said the annex that was purposely built to house the administration and allow for more space for the users of the facility had to be abandoned because of the intrusion of water, rust on metal objects and the infestation of termites. She said the structure was built right on an area that is always flooded during the rains.

Mrs. Johnson said they are now spaced constraint as the children’s section had to be partitioned off in order to accommodate other offices of the administration thus leaving them a very small area.

“We need to bring our library infrastructure up to standard,” she stressed.

On the third challenge, the DG of GNLSA said capacity of the staff needs to be built, adding that there is no course on library science even at the certificate level being offered in the country. She said this is one of the reasons why library work is not an attraction for grade twelve school leavers in addition to the stagnation they have seen in terms of professional and grade progress with regards to the library staff. “The turn-over of staff to other areas is so fast and the best way to retain them is to build their capacities,” she said.

Mrs. Johnson added that sending them for training abroad with even short courses, attachments or study tours would help in motivating and building their capacities. She said this training is not only for the library assistants and those in the library cadre but also the ancillary and support staff.

Regarding the services, the DG noted the lack of technological capacity to maintain and preserve the collections at the ‘Gambiana Section’ of the library which is the most priced area, as it contains publications that are required by law to be deposited with the library as well as other literary works by Gambians and non-Gambians about the Gambia.

DG Johnson talked about the ‘two in one’ at the library by having both a national library and a public housed in one facility and the need to separate them. She said the national library can take care of the research aspect and literacy issue which they are not doing now, adding that the public library aspect overshadows the other purpose.

“All these needs commitment and goodwill from the government…all what we have been crying for is to have land so that we can expand and not only here but also to all the regions and they can become community centres,” said Mrs. Johnson.

She said they have their proposals and plans and are only waiting to have this land and the resources to build a fit-for-purpose modern library complex.

Mrs. Johnson also noted the need for mobility to be able to cover the regions as the National Library is now mandated to train teachers to manage libraries in schools.

She also talked about community libraries that are established by philanthropists but which are eventually abandoned when they are leaving. She said GNLSA should be allowed to manage all community libraries to ensure the provision of effective service, relevant books as well as the continuation and sustainability of the services.

“We want the population to be reading. You don’t just have to read to pass your exams, you can continue to be reading up to old age,” concluded the GNLSA Director General.