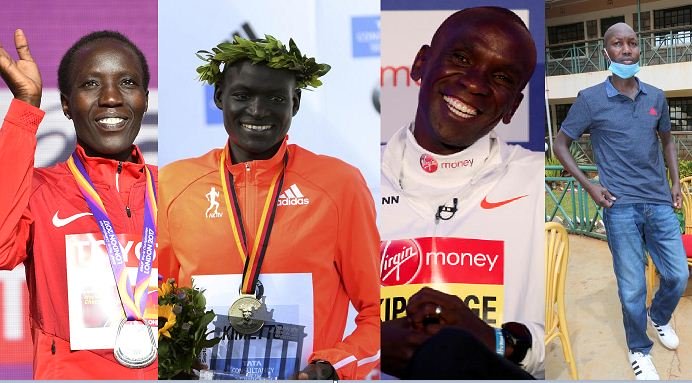 Some were cobblers, others trapped moles to survive.

The road to stardom for many Kenyan athletes was not smooth.

They have certainly made names for themselves in athletic circles, but theirs is a spectacular rags to riches story.

Their extraordinary origins wows the sporting world. Like Elijah Lagat, the 2000 Boston Marathon winner and former MP for Chesumei Constituency, offers a refreshing and inspiring story.

In 1992, Lagat was fat and weighing 158 pounds (71.7kg) at that time and battled breathing problems that resulted from clogged arteries.

Doctors advised him to start running, which he did in January 1993. In 1994, he entered local races in the then Nandi District and he enjoyed it until he opted to compete in major races.

World marathon record holder Eliud Kipchoge’s journey to stardom is another fairy tale in global athletics – it simply inspires and warms the hearts of budding athletes.

While transporting almost 150 litres of milk to KCC, Kipchoge’s bicycle broke down in Kimondi area –some five kilometres away.

He decided to run to his friend Daniel far away to borrow another bicycle. He impressed his peers on the roads who asked him to enter an athletics competition in Kapsabet that weekend. Kipchoge gave it a shot.

Joseph Ebuya, the 2010 world cross country champion, left his fellow herdsmen and traveled almost 500 kilometres from Turkana to Eldoret hoping to take up athletics and earn money to buy land and settle away from cattle rustlers. And within a short time, Ebuya was an accomplished athlete.

Despite having battled numerous challenges at the cattle-rustling prone area of Katilu in Turkana, Kelai cuts a different image in the athletics world –he uses prayer as a guide to ensure he stays ahead of the curve in distance running.

Coming from a rather hardship region, Kelai beat huge odds at his rural home to the pinnacle of global athletics, where he struck gold medal for Kenya at the Club Games.

“My parents passed on when I was 13 years old and my uncle had to take care of me. That has inspired me always and points why I do the sign of the cross after every race. I dedicate my success to them,” said Kelai.

Kelai is best remembered for leading athletes to Voluntary Counselling and Testing (VCT) in Eldoret.

Immediate former world marathon record holder Dennis Kimetto rose from trapping moles in Kamwosor Village in Keiyo South to global fame, stunned the world when he ran a jaw-dropping 2:03.57 time in 42km –becoming the first man to run a sub-2:03 in marathon in 2014.

He used to set setting traps in order to flush out moles in people’s farms in his rural home to earn a living.

Wilson Kipsang, another former world marathon record holder, tried his hand in selling potatoes in Molo in Nakuru County after competing Form Four at Tambach High School in Keiyo North. He was later enlisted into Kenya Police where picked up athletics.

Geoffrey Mutai, who set a course record of 2:03.02 at the 2011 Boston Marathon, served as a general worker at Kenya Power in Nakuru before he started to train in athletics.

One time world’s second fastest marathoner Moses Mosop was a cobbler at the Kamasia trading centre in Marakwet.

After finishing Form Four at the athletics-rich Marakwet High School, and with poverty a hindrance to his unbridled love for athletics, Mosop decided to repair shoes to get money to buy running gear and raise matatu fare to attend athletics competitions.

He says that through the experience, he earned a shoe repair contract at Kipnai Girls Secondary School in 2001 where he mended shoes for students and teachers every Sunday.

While herding goats seven kilometres away from home at Koisung’ur Forest, he was always ready for a quick dash just in case the notorious Pokot cattle rustlers attacked.

His fairy tale is a carbon copy of Micah Kogo’s storyline. He has also come a long way.

Kogo, also who endured numerous hardships after completing his secondary school education, has cut himself a niche in athletic circles.

Born of peasant parents in Orane village in Burnt Forest, Uasin Gishu County, Kogo discontinued schooling after dropping out in Form Three at Tulwet High School for lack of fees in 2001.

But in 2003, Kogo who operated a butchery at Burnt Forest Trading Centre made a meteoric rise by breaking the world 10km record and managing a runner-up finish in his debut at the Boston Marathon.

After his academic dreams crash-landed in 2002, fortunes were up for Kogo. His elder brother then employed him to run a butchery at the Burnt Forest Trading Centre.

By and by, he saw some athletes in their usual training gear and developed an interest in the sport.

He then began to invest in the training kit and picked some training skills from the athletes.

Within a year, he had started training and would record his achievements in his running diary. Steadily he made a mark on the global scene.

One of the drivers of Fila camp, then run by two-time Boston Marathon winner Moses Tanui spotted him. He introduced him to Tanui, who absorbed into the camp.

Unfortunately, he discontinued schooling due to lack of fees and decided to try his hand in business. He would buy sheep and goats in Lelan area and transport them to Kaptalamwa market. But the business did not pick up and eventually, he ventured into athletics.

Turbulent times for former players of KCC and Rivatex