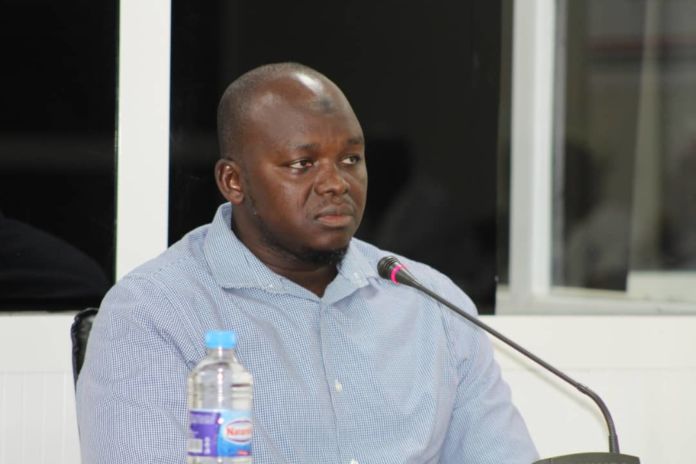 A former orderly to former President Yahya Jammeh has told the TRRC that General Saul Badjie commanded the arson attack on the defunct Independent Newspaper.

Yusupha Sanneh appeared before the Truth, Reconciliation and Reparations Commission (TRRC) on Wednesday. He said sometime in 2003, they were briefed by late Major Kalipha Bajinka and one senior officer Sarjo Jarju that they shouldn’t follow unlawful orders, but the two were reported for discouraging soldiers from carrying out orders of the former head of State, Yahya Jammeh.

The 43 –year – old said he, Sanna Manajang, Sheriff Jisseh, Michael Correa, General Saul Badjie and Bora Colley set fire on the Independent Newspaper. He said this was around 2 to 3 in the morning and General Saul Badjie told them that former President Jammeh instructed them to burn the Independent Newspaper. He said they were armed with AK47 and their personal pistols.

“There was a gallon and it contained something like fuel and he told us that the Independent Newspaper should be burnt. I remembered what I was advised and I told him that I had a knee problem – therefore I cannot run. They left me in the car and they left,” he said.

He said General Badjie handed the other soldiers with the gallon believed to be containing fuel. He said he heard General Badjie speaking to someone on phone saying “yes sir – your execellency,” in a short telephone conversation.

“General Saul Badjie told me you are an idiot,” the witness said.

He said the car was parked 30 to 40 meters from the Independent Newspaper building and they were able to see flames in the building.

“When they go for about two minutes, we heard noise and they (the soldiers) were running and people were shouting ‘fire’. Sanna Manajang’s hat was burnt and we helped him put off the fire. Sanna Manajang’s body was burnt up to his stomach. General Saul Badjie did not tell him anything and he was panicked,” he said.

He said these soldiers came running and they were confused.

“They even passed our vehicle,” he said, adding that “Sanna Manjang left his pistol at the scene.”
“Sanna Manjang said “Na hajo be tinyata”meaning he was been destroyed in Mandinka,” the witness said.
“I saw this guy’s (Sanna Manajang’s) body all burnt,” he said.

He said the operation was commanded by General Saul Badjie. He said Sanna Badjie was treated in Kanilai at the clinic. He said after this mission, General Badjie wouldn’t call him for patrol. He said shortly after the operation, he was transferred to Bravo Company at the State House as plain cloth security personnel. He said he was a plain cloth officer for only six months after which he was selected together with three others as orderlies to former President Yahya Jammeh and he was posted at his residence in Kanilai. He said he was trained on how to protect the former President.
About the Witness
He said he was born 11th September 1976 in Siffoe village. He said he joined the army in 1995 as intake 18. He said he was a guard at the Fajara Barracks from 1996 to 2000. He said he was deployed as the orderly to two battalion commanders of the Fajara Barracks from the years 2000 to 2002. He said he underwent commando training in 2002. He said the commando training dubbed “Scorpion 2” under Libyan trainers and some Gambian instructors. He said these Gambian instructors attended “Scorpion 1” and they included General Saul Badjie, Sanna Manjang and Malick Jatta.
He said they were always deployed in advance whenever former President Jammeh was going for a meeting to secure the place before he arrives. He said the entire Delta Company was moved from the State House to Kanilai. He said after the commado training, he was promoted to Lance Corporal and he was under the Delta Company at the State House from 2002 to 2004.
He said they used to do border patrol along the borderline around the Cassamance Region of Senegal. He said he was based in Kanilai from 2003 to 2004.