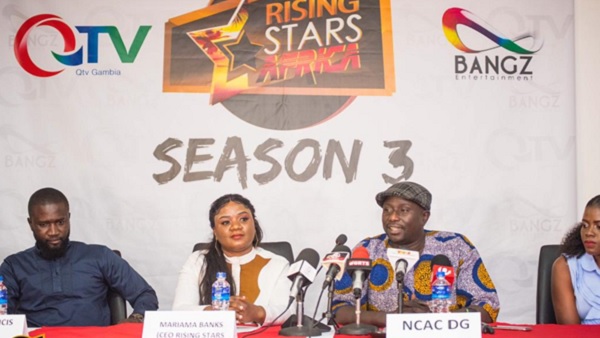 A popular show on the national TV, GRTS, Rising Stars Africa is a talent competition providing participants, mainly youth, a platform to showcase, display and discover their talents.

The producer of the show, Mariama Bangura, whose Bangz Entertainment are the organisers of the show, said her crusade is to help make dreams of young Gambians a reality.

The producer was speaking at a presser, green lighting the official start of season 3 of the show.

Declaring the season open, she said: “It is important to note that Rising Stars Africa does not only promote arts and culture, it is also a platform for youths to express themselves.”

She disclosed that the series is her brain child which started in 2016.

This is a huge opportunity to positively sell and promote The Gambia. Rising Stars Africa season 3 promises to be bigger and better.

Our current budget stands at D3.7 million and apart from the winner, we are looking at engaging all finalists.”

Sheikh Omar Jallow, the director of creative and performing arts of the National Centre for Arts and Culture, NCAC, declared the centre’s full support for the initiative, saying it is something relevant to the creative industry of The Gambia.

“We have weight the programme, and technically we have looked into it. We certainly will give all the support that you need to make sure that this actually moves but we are very interested in sustainability. It doesn’t have to be a one-time game and it dies out.”

Kujeh Kah, representative of QTV, said the show is in line with QTV’s objective of showcasing Gambia in a “very positive light”.

“We have talents here,” she remarked.

Lamin Darboe, executive director National Youth Council (NYC), also praised the idea, and said it is in line with the priorities of the youth and sports ministry.

“One fundamental way we could explore to address our problem of youth unemployment in this country is to invest in the creative industry,” he stated.