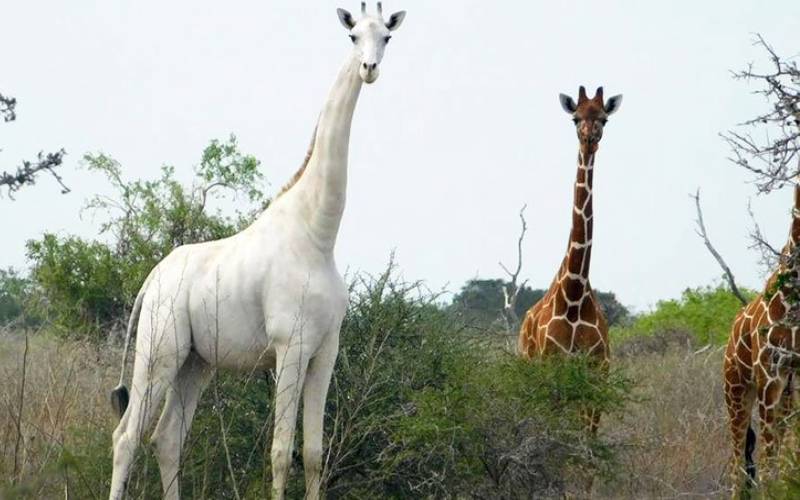 The only white female giraffe and her calf reported to have been killed through poaching might have died four months ago, the Kenya Wildlife Service has said.
In a statement from KWS corporate communications officer Ngugi Gecaga, the agency said it is investigating the incident that led to the death of the two giraffes at Ishaqbini Hirola Conservancy in Garissa County.
“Our teams on the ground have seen bones believed to be those of the two giraffes. The bones are estimated to be four months old.”
He went on, “The management of the conservancy informed us of the missing giraffe and calf after failing to see them for a period of time.”
The statement added that KWS personnel are working with community rangers and the conservancy management to establish the facts around the incident.
This comes after the Ishaqbini Hirola conservancy confirmed the deaths of the two giraffes in a statement on March 10.
The community conservancy said the giraffes were killed by poachers.
Mohammed Ahmednoor, Ishaqbini Hirola Conservancy manager, said “This is a very sad day for the community of Ijara and Kenya as a whole. We are the only community in the world who are custodians of the white giraffe.”
“Its killing is a blow to tremendous steps taken by the community to conserve rare and unique species, and a wakeup call for continued support for conservation efforts.”
The white giraffe made headlines in 2017 after its discovery, with its unique white hide.
The giraffe had a rare condition known as leucism and did not suffer albinism.
Unlike albinism, animals with leucism produce dark pigment in their soft tissue, making their eyes dark in colour.
“This is a long term loss given that genetics studies and research which were significant investment into the area by researchers has now gone down the drain. Further to this the white giraffe was a big boost to tourism,” Ahmednoor added in a statement.
The announcement also comes in the wake of conflicting reports on social media platforms that the white giraffe and her calf were killed by a terror group for game meat. Other reports indicated that conflicting communities might have killed the animals.

Three suspects including police officer arrested with ivory worth Sh800,000