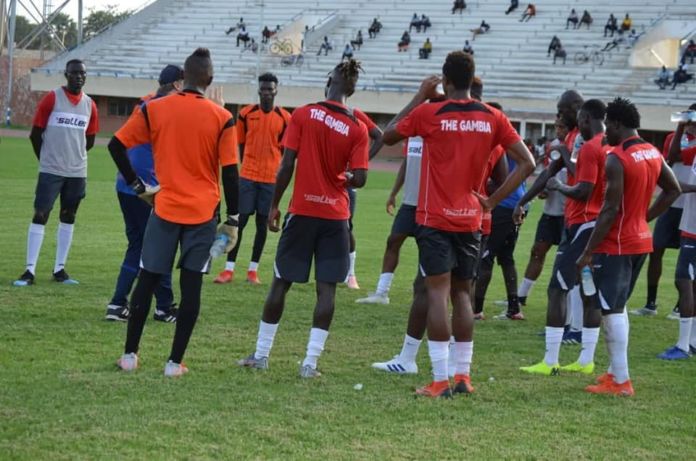 When the arbiter meandered to the touch-line to deliver some telling off to Gambia’s coach Tom Saintfiet in the closing stages of yesterday’s eventual 1-1 draw, it confirmed trouble loomed, indeed on the side of the Scorpions.
Desolation cut across the Belgian’s face as he watched rather agonizingly his side being taught a lesson to forget with some breathtaking provocative ball possession by football never-do-wells Djibouti.
The minnows were rightly tagged the underdog in the lead up to the game –and this was an undisputed fact –but their performance forced pundits to gulp down that assessment by the time the whistle went signing end of time.
Any team playing home is difficult to come up against never mind their footballing status with roaring home support there to inject determination.
Gambia were by far the favourites and the calibre in their ranks justified this. But like the catastrophe that befell the star-studded 2012 Senegalese team, it was painful proceeding to watch.
Djibouti’s coach’s Julien Mette admitted the profile the Scorpions carry isn’t ‘favourable’ to his side in the run up to Wednesday’s meeting. However, he insisted they would give it their best shot.
And their best shot, they gave it. From get-set-go, these minnows of inexperienced players plucked off the hardly competitive domestic league, dominated proceedings to the end. Up against Gambian players whose lucrative weekly wages could potentially pay off Djibout’s entire squad, the East Africans showed the temerity of Madagascar and little wonder they model their game around the Island country.
Tom Saintfiet fielded a four-man defence wall with Sheriff Sinyan and Dawda Ngum the deep-lying midfielders complemented by Bubacarr Jobe and Ebrima Colley with Assan Ceesay and Ali Sowe upfront.
Notwithstanding, the hosts went on the rampage fired up by hunger to cause an upset.
It must be noted this is a team put together from the time of Julien Mette’s appointment to Djibouti’s managerial helm March this year. They’ve played four matches –interestingly all being defeats – after months of collective training hence their near perfect anticipation of movements, ball deliveries and gegen-pressing tactic.
The Scorpions, on the other hand, looked out of place and struggled through it all battling to keep the ball or even wriggle out of their yard to the opposite end of the artificial pitch.

A perfect case of a team of individual players in disarray, the visitors lacked mental sharpness and instead booted the ball around and kept the round object where they needed not to, culminating into the goal conceded.
The players in yesterday’s mediocre display are all starters at their respective clubs abroad and this should spare the coach of sticks from those in the habit of fingering him for blames.
Like all tacticians, the onus of erecting a solid team is the gaffer’s but the zeal to penetrate the adversary and scoring is solely the players’.
The Scorpions cut desolate over pampered figures who truly never wanted to be there. From simple touches to initiation of attacks, it all was in shambles.
Some seriousness only showed in them when Morocco-based Muhammed Badamosi got thrown in the mix in the final minutes as Gambia later equalised.
Former Real de Banjul attacker Badamosi would prove a thorn in the throat of opposition defences each time he comes on provoking the question why he gets overlooked.
He was the most impressive from the unprepossessing recital along with the workaholic Assan Ceesay from a blizzard of players with zero determination.
Gambian players have long decried lack of support from home fans, who, by all accounts, have increasingly grown disenchanted and have right to.
The truth though is no one adores being associated with frequent defeats, in Gambia’s scenario a habitual wanton.
Gambian players need to give themselves a long hard look especially now they have just the Afcon to fight for, which by recent indications, look in danger too.